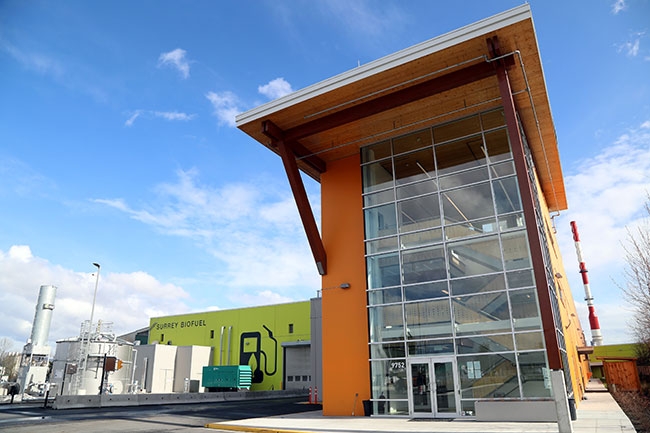 Used to produce renewable natural gas (RNG) and compost soil amenders, the Surrey Biofuel Facility (SBF) takes curb-side organic waste and converts it into fuel for the city’s fleet of natural gas vehicles. The $68-million facility, located in Metro Vancouver, opened March 9, 2018, and is expected to produce roughly 120,000 gigajoules of RNG and 45,000 tonnes of compost annually.

City-owned, the facility was designed by U.K.-based Renewi Plc., and will be operated by the waste management company’s North American subsidiary for 25 years while Surrey uses the biofuel by way of gas credits going into the Fortis natural gas grid.

“It’s a very robust system and I think that’s why people will be interested in this kind of facility,” says William Selten, interim operations manager of the SBF.

Using the latest anaerobic digestion (AD) technology to convert waste into RNG, the process begins at the curb where trucks pick up organic waste, kitchen and yard, from residents and businesses. As trucks enter the facility negative air pressure prevents any odours from escaping the building and once within its walls waste will be treated exclusively in-vessel, only leaving the building once it is injected into the grid, or as a high-quality soil amender.

Inside the facility, waste is deposited in collection halls where it will be stored until ready to go into the AD for treatment. Once the process is complete raw biogas rises and is transported to an adjacent gasholder. From there the gas is fed into a scrubber where it’s upgraded, dried and injected into the grid.

Fresh organic waste is also placed within specialized tunnels where it’s combined with digestate and inoculants then continuously monitored to ensure that no anaerobic spots develop.

Once the composting process is complete the material is filtered to remove contaminants and then stored until used within the community and eventually returned in the form of organic waste.

“It’s really an amazing example of what a circular economy is,” says Michael Leopold, general manager of Renewi Canada. “The trucks are picking up waste, but they’re picking up waste that will ultimately fuel them on a daily basis.”

Scott Brundett, process leader at SBF, says it’s this completely cyclical and self-sustaining process that sets the SBF apart from other producers. “I think one thing that is a little different for us than some of the plants in Europe is that a lot of those [facilities] use the gas to produce electricity, so they’ll just burn the biogas directly in a generator,” he says. “Here, of course, electricity is much less expensive and [Surrey] wanted to fuel their waste trucks.”

In Canadian biofuel facilities, closed-loop systems are not something that have been focused on, while the use of many biofuels remains similar to those in Europe.

“In Eastern Canada, there’s been anaerobic digestion technology for a while now in fermenters, but a lot of [companies] were doing it with hydroelectricity instead of gas, so they were generating a biomethane gas but were using it right on site to burn into generators that generate electricity,” says Leopold.

Between the ways biogases are used and the processes used for creating it, the SBF is already a unique advancement in green technology, however, according to Leopold there is another way the facility sets itself apart.

“We’re one of the only producers where we have all of these technologies under one roof,” he says. “It’s not like we’re doing anything original, in terms using a wet fermenter, but I don’t think anybody’s ever taken all these technologies and put them in the same building. It gives you a lot of flexibility.”

THE TECHNOLOGY THAT MAKES IT POSSIBLE

Anaerobic digestion
Anaerobic digestion uses bacteria to produce biogas from organic waste that’s been sealed inside specially constructed tunnels. A bacteria-rich percolate mixture, that includes liquids leached from organics during AD, as well as oils and fats, is sprayed on new material activating the biogas production process, which takes between 21 to 28 days. This process in not new, but SBF sets itself apart due to the variety and quality of material it is able to use.

“We’ve got a dry AD for dry waste but we also have wet AD for liquid waste streams, so there’s a combination of the two it’s not just one,” explains Selten.

“It’s a very flexible plant,” adds Brundett. “They are integrated, so all of the gas that is produced from the dry AD tunnels accumulates in the top of the liquid digester tank.”

Biogas upgrader
Water scrubbing is an energy efficient and environmentally friendly way to upgrade biogas and produce biomethane, an RNG that is interchangeable with natural gas.

The process begins with raw biogas, a mixture of methane (CH4), carbon dioxide (CO2) and trace contaminants, being compressed and fed into a scrubber where it’s showered with water, capturing the CH4 and flushing out CO2 and other impurities. Any methane not captured in the scrubber is removed in a flash tank, recovered and pumped into a stripper where the CO2 is released from the H2O.

Clean water is then circulated back into the scrubber, while the CO2 is recovered for use elsewhere in the facility and clean gas is dried then injected into the grid.

Composting tunnels
Fresh organic waste, combined with digestates and inoculants, is placed in specialized tunnels fitted with a spigot aeration system. Temperature, humidity and pressure levels within the tunnel are continuously monitored to ensure microorganisms are able to complete the composting process.

If oxygen levels drop, fresh air is injected up through the waste to increase them and ensure no anaerobic spots develop, while humidity levels are controlled by a leachate system that sprays water onto the composting material.

Under these precise conditions compost is produced in two to three weeks after which it’s moved to the refinement section where the material is separated into compost, inoculant materials and oversized fractions, which mainly consist of plastics that can be converted into a solid recovered fuel in the future.

“Our odour abatement system is state-of-the-art,” says Leopold. “We’re running the facility at 200,000 cubic metres of air flow an hour and all of that gets scrubbed.”

Ammonia, released during decomposition, is the primary source of odours associated with composting, so as air is expelled from the tunnels, it is channelled through an ammonia scrubber, where sulphuric acid reacts with ammonia to produce Ammonia Sulphate, which is recovered and used as fertilizer.

Next, the air is cooled and humidified by a counter-current water spray prior to being passed through a woody bio-filter where microorganisms are used to absorb any remaining odours. Finally, the air is sent up the vapour stack and is rapidly dispersed 70 metres above the ground.

Success for Surrey
With the ability to process 115,000 tonnes of organic waste a year, the 160,000 square foot SBF was designed to keep up with Surrey’s predicted growth over the next 25 years.

Currently the city is able to independently produce 65,000 tonnes of organic waste per year and expects be able to fully utilize the facility on its own by 2043, until that time organic waste will also be collected from commercial sectors and nearby municipalities.

The facility is only one of many initiatives the municipality has taken to meet diversion and carbon goals, and although it has only been open for a short time SBF has already taken Surrey beyond its initial goal.

The project was put together at no cost to Surrey ratepayers. Funding for the facility was made possible through the federal government’s Public-Private Partnership program (P3 Canada Fund), which sees private companies and the federal government collaborate to help bring new infrastructure to Canadian communities.

“Investing in innovative projects like the Surrey Biofuel Facility is vital to reducing our carbon footprint and establishing cleaner, more sustainable communities,” Ken Hardie, MP for Fleetwood–Port Kells, said in a release.

To learn more about the SBF, or to book a tour of the facility visit www.surreybiofuel.ca