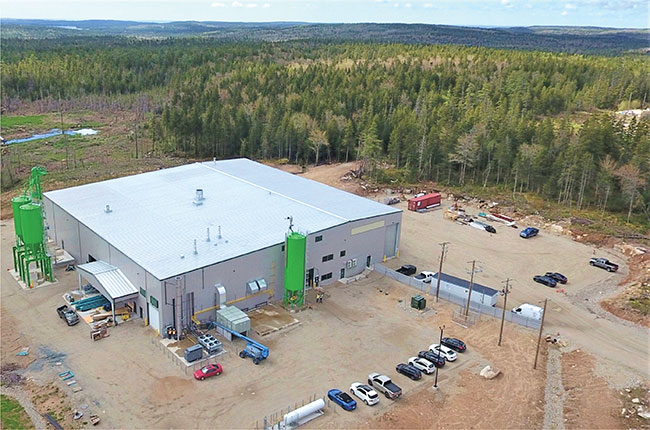 A Canadian cleantech company is on the cusp of scaling up a potentially disruptive technology and business case to turn more than 90 per cent of a municipality’s household garbage into usable material.

The company, Sustane Technologies, is in the late stages of opening a demonstration plant in the community of Chester, N.S. The 40,000-square-foot pilot plant, built on site at the local landfill, diverts 90-plus per cent of waste entering the gates to produce biomass pellets, synthetic diesel and recyclable material.

Sustane’s vice-president of finance and strategy, Fraser Gray, says the process is a game changer for municipal waste reduction.

“We are not really waste-to-energy. We are not turning our material into electrons on site. We are a platform for advancing recycling,” he says.

The process is neither incineration nor gasification. It’s a series of low-temperature and low-pressure processes that separate municipal solid waste into purified streams that are then converted into usable biomass and fuel products. Unlike waste incineration, Sustane’s low-pressure and low-heat processes create minimal emissions.

In 2017, the company completed a full lifecycle greenhouse gas assessment that found their 70,000 tonnes-per-year facility would reduce CO2 equivalent emissions by nearly 186,000 tonnes annually – comparable to taking more than 41,000 cars off the road.

“We think this is a really positive story,” Gray says. “Eliminating waste has a massive impact.”

In 2015, the Municipality of Chester came on board to host Sustane’s pilot facility at their landfill, the Kaizer Meadow Solid Waste Management Facility, about an hour’s drive west of Halifax. The landfill manages roughly 50,000 tonnes of municipal solid waste per year.

With the deal in place, work began in 2015 to fundraise from various agencies and shareholders. The project received sizable loans or contributions from Atlantic Canada Opportunities Agency, Sustainable Development Technology Canada, Nova Scotia CITC, and Federal ITC, as well as investments from a Canadian chartered bank and Business Development Bank of Canada.

Over the next few years, the Sustane team, led by Vinall in Nova Scotia and De La Fuente in Spain, designed and built the company’s proprietary waste separation system. Once complete, the equipment was imported into Canada.

Plant construction began in early 2018 and was completed last September. The commissioning phase was well underway in February and the company anticipates full operation mode by this summer.

Processes
All curbside-collected municipal solid waste that enters the landfill will go through Sustane’s facility. The facility is not currently designed to process organics, recycling, construction waste or large appliances, although they are not ruling all of these streams out in the future, Gray says.

The first step in the process is a large industrial shredder to bring the material to size – roughly four-inch minus. That material is then conveyed to Sustane’s proprietary system, which, through a unique process, conditions the material for separation.

“Think of the packaging around a cookie bag – it’s plastic and paper glued together. Our system de-bonds it,” Gray explains. “It’s the critical process. If you don’t do that well you can’t get clean materials downstream.”

The de-bonded waste goes through a series of 14 points of separation and screening to isolate material for the various product streams. A Tomra near-infrared scanner ensures the material has separated and sends any off-grade material through a reprocessing centre.

Roughly 20 per cent of municipal solid waste feedstock is plastic. The plastic stream is cleaned and taken through a pyrolysis system, purchased from a Utah company, that converts it into a synthetic diesel.

About 50 per cent of the feedstock is biomass material – anything organic isolated in the debonding. The biomass stream is sent through another separation processes to purify it before it is dried and pelletized. A Kahl belt dryer, pellet mill and cooler see that process through.

The remaining 30 per cent of the feedstock is either metals (five per cent) that are sent for recycling, water (15 per cent), or inorganic material like glass (10 per cent) that is returned to the landfill.

“It’s not complete diversion of waste. We are not eliminating landfills. We are diverting 90 per cent of the waste that is not already diverted. That is going to change the game for municipalities,” Gray says. 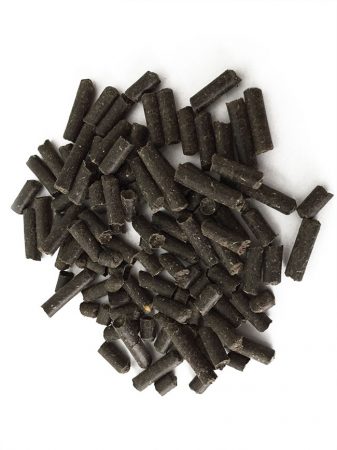 About 50 per cent of the waste feedstock is biomass
material. That material is purified through a series of separation processes, dried and pelletized.

Products
The two high-value products from Sustane’s process are what make the business model work.

“We are not subsidized, but we get paid a tipping fee to take the waste. We’re being paid to take a raw material and make other raw materials out of it,” Gray explains. The result is competitively-priced products for the end users.

The bulk of the biomass pellets’ feedstock is previously processed organic material from the pulp and paper industry, such as cardboard packaging. Once separated, the fine, cellulosic material is easily dried and pelletized, leaving about a 15 per cent moisture content in the end product. The high-quality pellets will be sold bulk to an undisclosed buyer in the Nova Scotia market for co-generation.

The synthetic diesel is made mostly of film plastics from packaging waste. In a given year, with plastic around 20 per cent of feedstock, Sustane expects to produce 3.5 million litres of fuel.

“It’s an environmentally positive fuel,” Gray says. “We’re able to create it from something that was going to be buried in the ground or pollute the oceans. We’re able to make sure that doesn’t end up in the landfill by pulling the plastic out and turning it into a fuel.”

Municipal support
Sustane’s cleantech solution would not have come to fruition had it not been for the forward-thinking community of Chester. The municipality was looking for a solution to reduce the volume of waste landfilled each year, but they wanted to do it in an environmentally friendly way, Gray says.

“For us, it was a good test of our social license,” he says. “They gave us a long-term contract and we targeted it at a level of cost that they could afford to do. That’s going to insulate them from cost escalation in the future, and eventually eliminate huge capital spends each year building new landfill cells and putting up bonding for the leachate. Now they promote us every year and they’re proud of what we are doing.”

When the project was originally announced, there was some concern from environmental groups who interpreted the technology as a justification to create more waste and continue to burn petroleum fuels. Their concerns encouraged Sustane to consider and define their role in the circular economy, Gray says.

“We want people to use less plastic, but for people to stop making and using them entirely is idealistic and impractical. We have to start dealing with the big issue now. We’re introducing a step that prevents plastics from going to the landfill or the ocean. It becomes a fuel, but it is net better for sure than making a virgin fossil fuel,” he says.

For some municipalities in Canada that do not have landfills, where they pay a premium to transport garbage to the nearest available site, Sustane’s facility would amount to a huge cost savings. As well, the fuel products could be used for heating and power needs.

Gray expects the company will be announcing new municipal partnerships in the coming year. The company has been in discussions with municipalities across Canada including particular interest in Alberta, B.C., Ontario, New Brunswick and others in Nova Scotia. There is also interest from overseas.

“We’re getting a lot of calls. But we’re now building our capacity to build more plants,” he says.

Scale-up
The ideal scale-up vision for the company is to build another 15 plants within three years and 45 plants in five years. It’s an aggressive vision, but Gray says the idea of these plants operating in many municipal landfills around the world is not unrealistic.

“If you do the math on how much waste there is in municipalities, and you do the environmental lifecycle assessment and compare it to all pollution and emissions, you could have an impact of 10 per cent on the total emissions in any given area. That’s a big deal,” Gray says. “It has a potentially massive environmental impact without a whole lot of heavy lifting.”

How will they make that happen?

“How does any company succeed: leadership, talent,” Gray says. “We’re putting a premium on getting good people and partners who have experience and an overabundance of talent and qualifications. That’s the difference in the long term.”