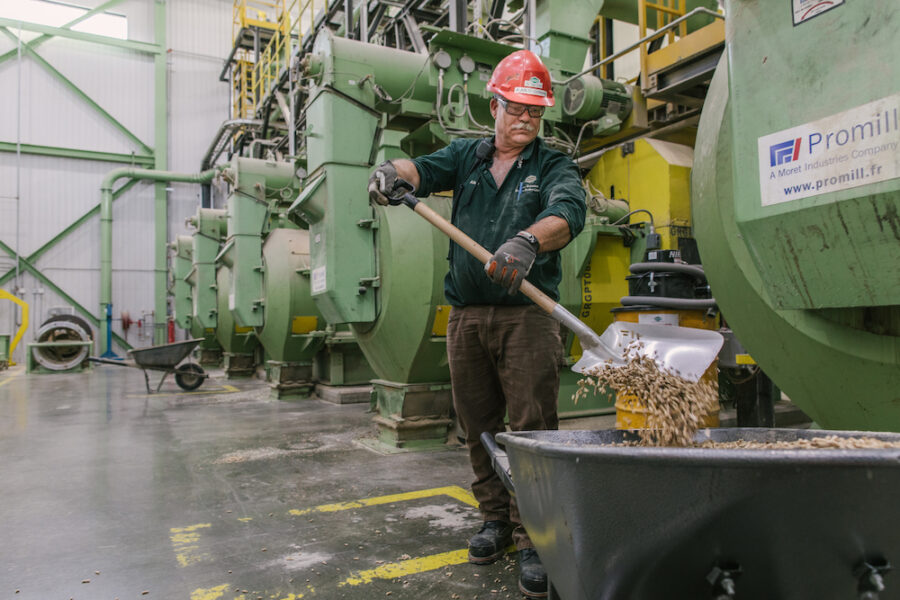 Grand River Pellets Limited came online within the last four years and has ramped up to become an important player in the Maritime pellet world. The pellet producer’s key to success is its role as a value-added consumer of sawmill by-products.

The plant is located near the St. Leonard sawmill in northwestern New Brunswick. J.D. Irving Limited’s six sawmills in New Brunswick and one in Maine, as well as a number of independent suppliers, send their sawdust and shavings to Grand River Pellets.

Operating since May 2019, the pellet plant has taken on a $30-million capital project that will more than double its nameplate capacity and allow feedstock flexibility.

“We built our plant to do 100,000 tonnes a year, but we brought in new raw materials [dryer sawdust] and managed to bring it to about 140,000, which is what we’ll do this year [2022],” explains Nicholas MacGougan, general manager of Grand River Pellets. “With the capital project, we are doubling the drying capacity of the mill and we’ll go from 140,000 to 220,000 once it’s commissioned and fully operational.”

A staff of 30 on four operating shifts allows Grand River Pellets to run 24/7. MacGougan says they don’t expect the expansion will changes those numbers. 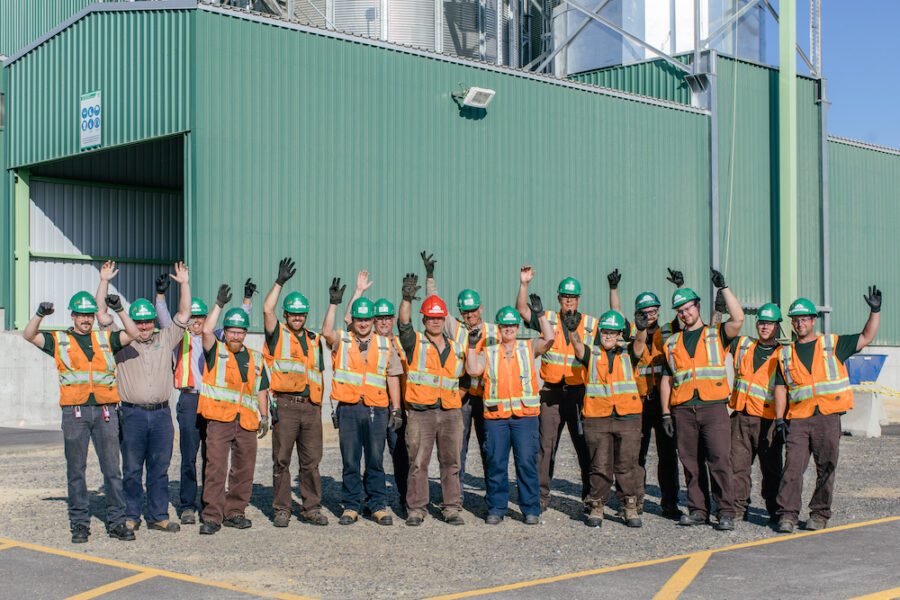 In November, the Grand River Pellets team was about halfway through the project, with all civil work complete and mechanical installation well underway.

The project will essentially double all outdoor equipment, which, for Grand River, is everything before the silo that feeds the pelletizers. The procurement list included a biomass burner, dryer, and wet and dry milling. It will also see additional equipment added in to process larger-sized material.

“Today we can really only effectively use sawdust and shavings.,” MacGougan says. “We’re building in flexibility on both lines to be able to use more low-value material like sawmill bark or biomass from the forest.”

Two new pellet presses and associated cooling and screening material, as well as a new storage silo, round out the capital project.

The new outdoor processing equipment is being installed as a completely separate line, with the two streams merging in a dry silo that feeds into the pelletizers. Adding a full new line allows the plant to continue operations through the capital project.

MacGougan expects the new line to be up and running in May 2023. 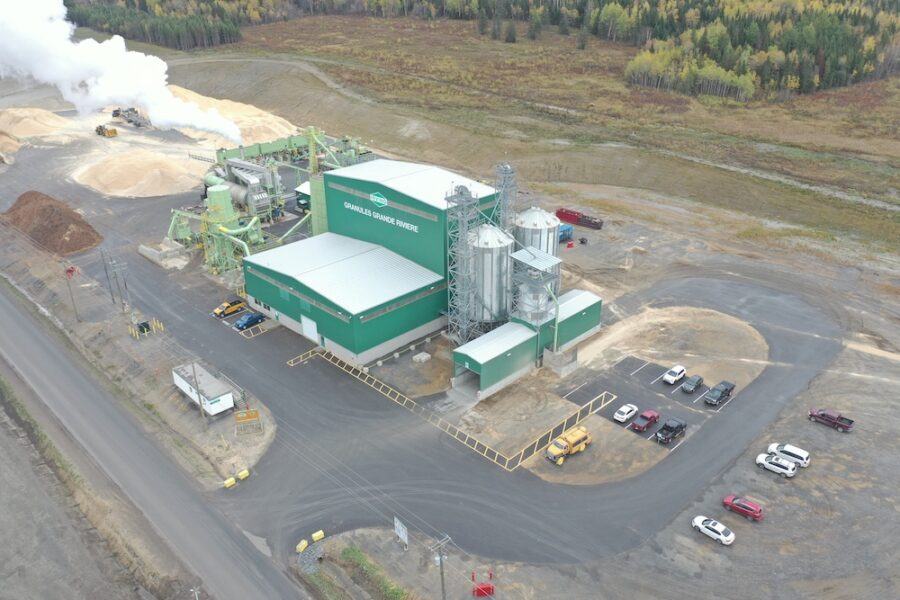 The expansion project is adding an entirely new line to the plant, allowing the existing line to continue to run during construction. Photo courtesy Grand River Pellets Limited.

Residues entering the Grand River Pellet site are offloaded and stored in outdoor piles. On the existing line, fibre heads through a Schutte Buffalo wet hammer mill before entering the Thompson rotary dryer, heated by a KMW walking floor biomass burner running on hog fuel from the adjacent sawmill. Dried material is then treated to a Schutte Buffalo dry hammermill and fed into a dry silo awaiting the presses.

The new processing line will begin with a new Brunette BioSizer to treat wet material. A new KMW biomass burner will fuel the new PDI rotary dryer. A large Andritz dry hammermill will process the fibre before heading to the silo. 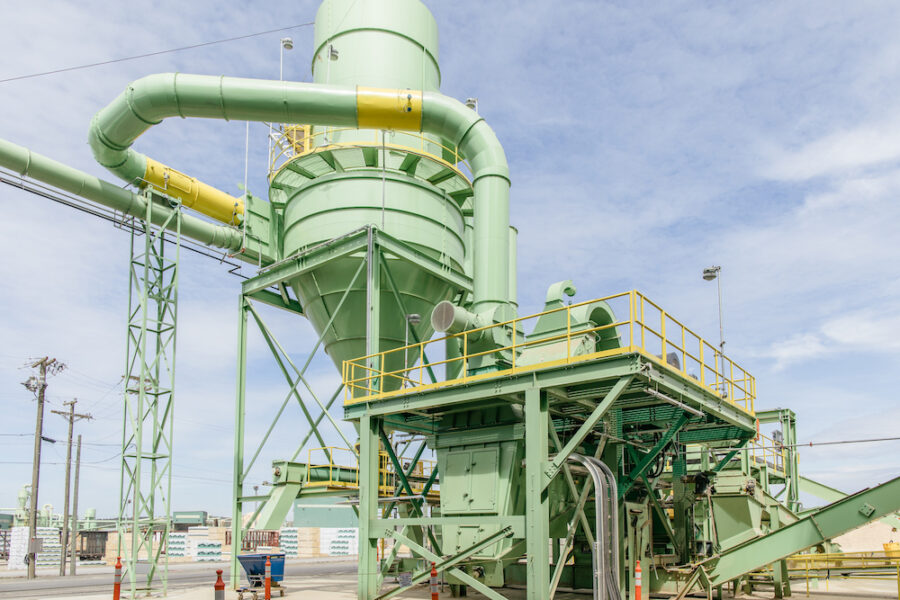 All equipment before the silo that feeds the pelletizers is outdoors to minimize dust hazards. Photo courtesy Grand River Pellets Limited.

The plant was designed with each of the five original Promill pellet presses feeding into its own dedicated cooler and screen. The two new ProGranul Toro pellet mills will keep with this configuration and have their own cooling and screening.

“It’s a higher cost way of doing it, but in terms of the quality, we’re very happy with it. It makes sure the pellets are cooled rapidly with very high durability and gets rid of the moisture so there are less corrosion issues,” MacGougan says.

A new Mecafa bucket elevator will bring finished pellets to the two new Symaga silos being built next to the current two Scafco silos, bringing total storage capacity up to 1,800 tonnes.

For dust safety measures, MacGougan says they’ve benefited from participation in the Wood Pellet Association of Canada’s Safety Committee, which gives them access to best practices and lessons learned across the pellet industry.

“Being exposed to that brought the level of understanding for our folks up big time. We were able to have those learnings [such as bow-tie analysis and inherently safer design] all up front in the design engineering,” he says.

Grand River Pellets produces 100 per cent industrial pellets, all of which are transported by truck to the Port of Belledune and shipped to utility customers in Europe. 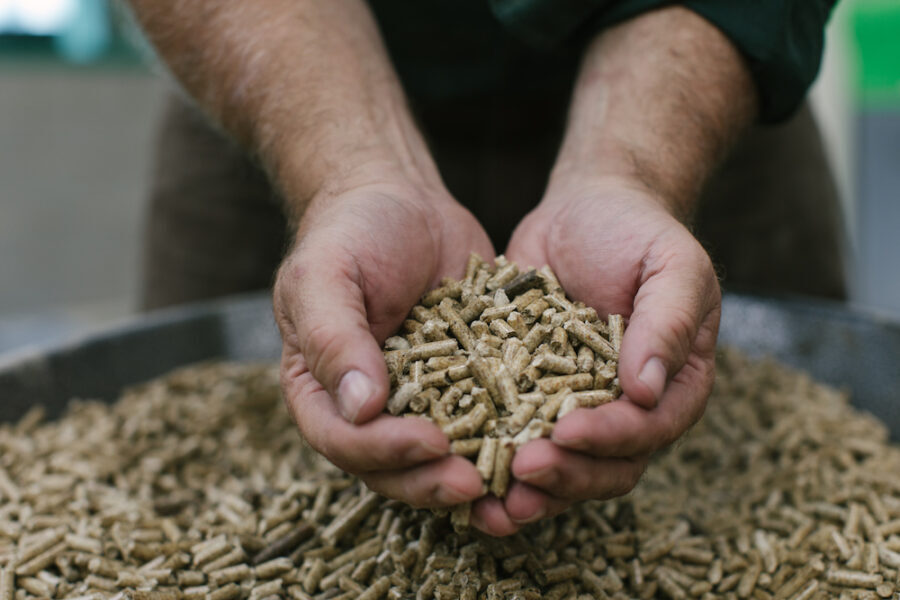 Despite this, MacGougan says they see a “huge opportunity” on the horizon for domestic wood pellet use in the Maritime provinces.

“We’re quite optimistic on the long-term prospects of the domestic heating market for pellets,” he says. “The market is tiny today relative to the pellet production capacity. Ninety per cent of the maritime pellet production is exported. But we don’t see ourselves forever being solely in the export market … that’s where we are at today and that’s really a function the historic push to electrify heating in New Brunswick.”

Yet, residential bioheat is an attractive option as federal and provincial low-carbon policies take effect over the coming decade, MacGougan says.

New Brunswick homes and businesses are highly reliant on electric heating and much of that load is supplied by fossil fuel-fired power stations. With the federal government’s pledge to phase out coal by 2030 and carbon taxes coming into play to disincentivize fossil fuels – the provinces will need to find alternative, higher cost sources of dispatchable electricity. Residential bioheat could take some of the peak electrical load off during the winter months.

“We could then use the electricity for more high-value end uses, like electrifying transport, which is already going to require huge investment on the electrical grid to move transportation away from gasoline,” MacGougan says.

“We think pellets have a real place to play to take heating loads away from oil, electricity, directly where the heat is needed,” he says.