September 30, 2012, Welland, Ont - The end is in sight for the principals at Great Lakes Biodiesel, as the Canadian start-up expects to start producing AST 6751 quality biodiesel as scheduled early this fall. 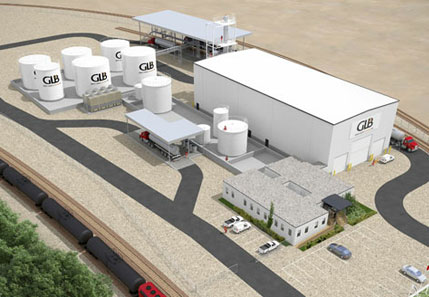 "We are on schedule to begin production in early October,"
CEO Barry Kramble says, "and we expect to be up to full production by the end
of the year."

The plant in Welland, Ont, is designed to produce 170
million litres/yr of biodiesel, and uses a proven process from technology
supplier Desmet Ballestra, giving Kramble confidence that ramping this plant up
will be a smooth process.

"There are 80 plants around the world of similar size using
this technology, so we don't foresee any issues. It's proven technology."

On the feedstock side, the plant will convert canola and
soybean (with an emphasis on the latter) principally from Ontario. Total
requirements approach 110 million litres of crushed seed oil, and the company
has been in discussion with the Grain Farmers of Ontario (GFO) to ensure the
production is available.

"They are very excited about this new market, and are
confident that there will be adequate supply." In farming terms, one bushel of
soybeans produces roughly 1.5 gallons of biodiesel.

As for markets, Kramble notes that Ontario, Quebec, and the
eastern seaboard are the main targets, adding that the plant has easy rail,
road and water access directly from its 8.5-million litre storage facility. The
Canadian federal B2 mandate requiring an average of two per cent renewable
content in both diesel and heating oils is also helping spur the project.

"We're excited about the potential from federal requirements
for minimum standards for biodiesel use here in Canada, and are working with
partners like the GFO to promote similar standards at the provincial level."

The company has worked with local suppliers as much as
possible in the plant's design and construction, including Welland's own Timbro
Construction and TWD Engineering of Burlington, Ont. When in operation, GLB
will support 20 full time positions, most hired locally as well, Kramble says.

Look to future issues of Canadian
Biomass and our enews for more information on this plant start-up, or visit the Great Lakes Biodiesel site for more info.