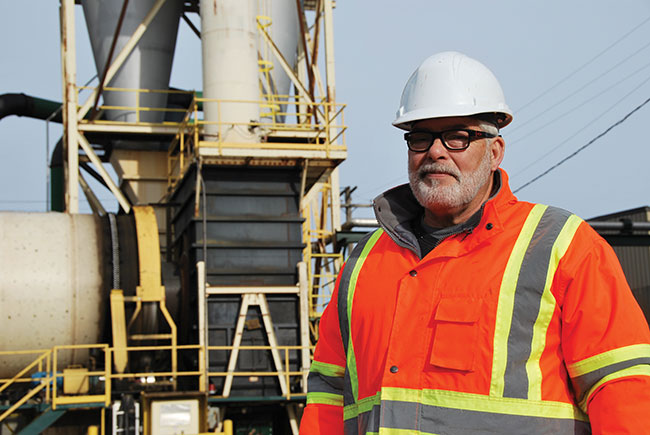 Nova Scotia’s newest wood pellet producers are taking measured steps to reinvigorate a 22-year-old plant with a shaky past but a bright future under new ownership.

The plant, located in Upper Musquodoboit about 90 kilometres north of Halifax, first opened in 1998 and saw a succession of owners before local Nova Scotia company Great Northern Timber Resources Inc. took the reins in 2018.

The new owners are well-known players in the province’s forest industry and are committed to keeping the 100,000-tonne capacity industrial wood pellet plant running safely and efficiently for the long-term.

Plant past
Upper Musquodoboit was once home to Eastern Canada’s largest sawmill – a thriving 250 million board feet operation owned by MacTara Lumber. In 1998, the operation expanded to include a pellet plant, built directly across a secondary highway from the sawmill site.

The two operations ran successfully for nearly a decade before MacTara, struggling with the global downturn in 2007, went into receivership. Germany’s Enligna purchased the pellet plant assets a year later, but the sawmill did not fare as well and was eventually emptied and demolished.

There are a few tell-tale signs of the former lumber operation visible today when driving up to the site. The main one is a still-standing, bright blue truck loading hopper.

Wright himself has history with the MacTara site. He was the original pellet mill manager back in 1998. Sitting at his desk in the office that once oversaw both the sawmill and pellet plant operations, Wright points out various other signs of the old sawmill – a piece of embedded concrete here and there that once supported the mill structure or the old staff parking lot.

“We had a 145-foot Fulghum log crane, stud mill, sawmill, two planer mills and five dry kilns. It was probably one of the larger mills in Eastern Canada,” Wright says.

Luckily for the pellet plant, its new German owners committed to running it for another three years, from 2008 to 2011, before they, too, went into receivership. In 2012, Vancouver-based Viridis Energy bought the plant and formed Scotia Atlantic Biomass Company.

Four years later, the pellet plant was once again for sale in 2017. Enter Great Northern Timber.

Plant revival
Great Northern Timber is the first Nova Scotia company to own and operate the pellet plant since MacTara. Based in Halifax, the forestry firm runs a chipping facility and shiploading terminal in Sheet Harbour, and operates its own woodlands division.

“We’re very integrated in our ability to bring in fibre. They know the industry very well and have those relationships to partner on fibre supply in the province,” Wright says.

The plant itself has several unique features that distinguish it from other pellet operations in Canada. One is feedstock versatility.

“This was one of two bark pellet plants in the world when it was built. The other was in Sweden at that time. This type of mill is very versatile, designed to process various sizes and types of raw material. It was designed for pretty much whatever you can throw at it and it still has that capability. Although there is no substitute for good clean material,” Wright says.

Much of the original equipment is still on site and a few smart investments and equipment modifications from Great Northern allows the plant to adapt to a changing supply and market base.

One notable visible difference is the plant layout. Rather than sitting under one roof, each of the production processes are housed in self-contained buildings and material is conveyed between them.

“When you’re dealing with fine, dry wood material, distance is sometimes a great safety. We were well laid out in that respect and it’s been a benefit over the years,” Wright says.

Each process has explosion venting and a GreCon spark detection system is used in dryer, hammermill, and dry conveying systems. A Scientific Dust Collectors dust collection system adds to the safety measures in the hammer mill building.

“We bristle with explosion venting, water sprinklers, deluge systems,” Wright says. “Rule of thumb, I’ve always thought, in a pellet mill environment is that it’s not if, it’s when. If a fire or dust explosion were to happen in a building or equipment, what is in place to eliminate risk to employees, equipment, and structures?”

An example of those safety precautions is that the hammermill building is closed to employees unless the process is shut down.

Adding to the safety of the plant is a readily available water supply. Two large dams of water sit a kilometre-and-a-half uphill from the site. “It’s gravity-fed so we have several million gallons of water available to us with no pumps needed,” Wright says.

The 20-year pellet veteran says safety knowledge is important to share within the industry, and the Wood Pellet Association of Canada (WPAC) is an important conduit for best practices. Wright, representing MacTara, was among the original founders of WPAC in the ’90s. Today, he’s a member of WPAC’s Safety Committee, which has members from pellet companies across Canada. 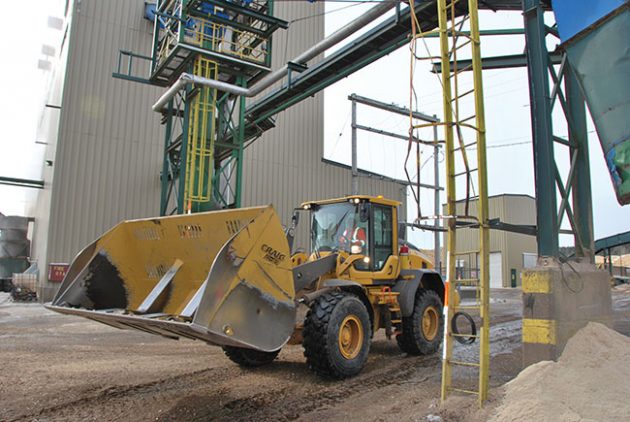 Much of the plant’s original equipment is still on site and a few smart investments and equipment modifications from Great Northern allows the plant to adapt to a changing supply and market base.

Upgrading
When Great Northern officially took over the site in early 2018, the team, led by Wright, did a thorough inspection and revamp of all equipment.

“We went over the complete mill from one end to the other. Since it had been sitting mothballed for more than a year-and-a-half, that involved overseeing everything mechanical, electrical, and programming,” Wright says. “There was a major investment to get it back into shape before we started.”

Existing equipment was carefully inspected and serviced as needed.

Feedstock for the plant is mixed in outdoor piles by Volvo wheel loaders and fed into a live floor infeed system. A separate infeed for hog fuel supplies bark to a GTS biomass burner (serviced by Sigma Thermal). Pellet feedstock is then fed up belt conveyors equipped with a belt magnet before heading to a Jeffery WB-66 hog. Homogenized fibre flows onto another conveyor which takes the material to the MEC drum dryer.

Dried material passes through two de-stoners before it is processed through two 60-inch Andritz hammer mills. A series of screw conveyors transport the dry fibre to dry fibre bins over top of five Andritz pellet mills. Pellets are then conveyed by belt to the cooling building where a Law-Marot MilPro counter-flow cooler and screener are located. The final product is conveyed to overhead storage and loadout bins, ready for shipping.

A CBI Magnum Force chipper on site is used to process low-grade round wood – a mix of poplar and various softwood species. Chips are then added to the pellet mix at the infeed. 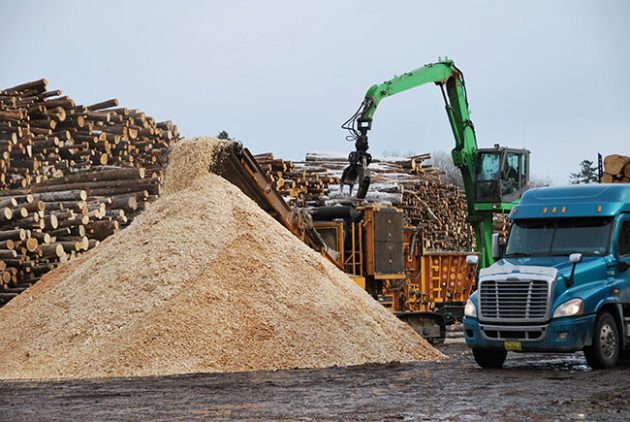 A CBI Magnum Force chipper on site processes low-grade round wood – a mix of poplar and various softwood species.

Future plans
Now that the plant is up and running at full capacity, with 27 staff members in place for a 24-hour operation, the team has been able to look at new ways to improve the process. A recent focus is lowering the pellet ash content to increase its production of premium pellets.

“We’re in the middle of an ash reduction project on our furnace. We’re re-routing the air flow so we can better collect the dust and fines from the furnace,” Wright says. The equipment is already in place and the team was testing and measuring the results in February.

Once the project is completed, the plant should be able to produce a much higher volume of premium wood pellets.

Further plant improvements are on the horizon, Wright says. “There are always projects. We’re going to work at improving our process and our run time. We’ve done a good job on that already but there is always room for improvement,” he says.

Support from Great Northern Timber Resources’ other branches – the woodlands division and the chipping and shipping facilities – is a huge component of the pellet plant’s new identity and will likely contribute to its future success. The company has deep roots in the province’s forestry community, and long-standing relationships with fibre suppliers such as sawmills and wood lot owners.

In January, Nova Scotia’s forestry supply chain took a hit with the hibernation of Northern Pulp – a large pulp mill in Pictou County, N.S. In spite of this, Wright says he’s confident the supply chain will stabilize and Great Northern Timber will continue to play an important role in it.