August 18, 2015 - The City of Prince George is helping clear the air in the city with help from its biomass-fuelled district energy system (DES), originally thought up in 2000 and eventually fully commissioned in 2012. 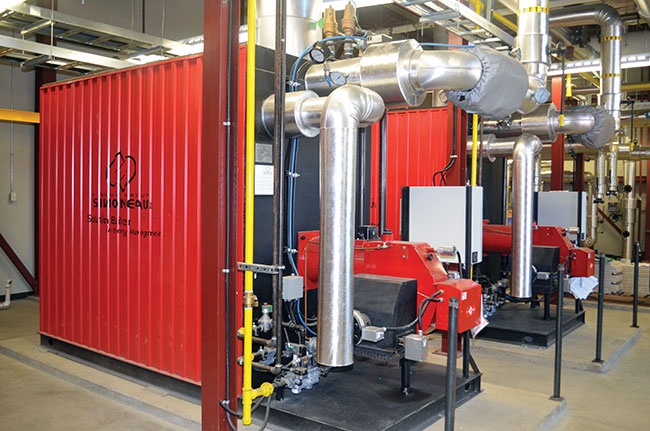 The DES system’s backup boilers are fuelled by natural gas and are designed to only turn on to top up the hot water coming from Lakeland Mills during the coldest winter weather or during routine maintenance. They have a combined capacity of 5-MW. The City of Prince George is helping clear the air in the city with help from its biomass-fuelled district energy system (DES)

Approximately 96 per cent of the total energy used in the DES system is supplied by waste heat generated by burning hog fuel from Lakeland Mills, with the remaining power coming from two 2.5MW natural gas back-up boilers that are used when the mill shuts down for maintenance, or if the system requires additional heat during harsh winter months.

“Currently, we have a 5MW capacity for thermal energy,” says Todd Angus, engineering assistant, Utility Plants, with the City of Prince George. “On the coldest days this past winter, we never went above needing more than 2MW, so we’ve got plenty of capacity.

The DES displaces 36,400GJ per year of natural gas previously being burned in the buildings’ individual boilers, which corresponds to a reduction in carbon dioxide emissions of 1,820 tonnes of CO2 emissions per year, according to Angus.

In addition to the direct savings generated by the DES, Lakeland Mills now no longer needs to haul a large portion of its biomass from its River Road location to offsite locations. As a result, truck traffic was reduced by approximately 45,000 kilometres per year, resulting in approximately 70 tonnes per year in particulate matter reductions.

The total cost of the project was just approximately $15.5 million. Over $10 million of the costs were funded by a variety of grants, including the Municipal Rural Infrastructure Fund Grant ($5.33 million); Green Municipal Fund ($800,000); and the FCM Grant Community Works Fund – Gas Tax Grant ($5.36 million). The remaining funds required were borrowed by the City of Prince George.

How it works
After the residuals are collected through various points of the sawmill operations at Lakeland Mills, the hog fuel is fed into the mill’s energy system. This part of the process has been done for decades at the mill to heat the kilns and the sawmill itself.

The new addition is that the hot oil from the original energy system and heat from an electrostatic precipitator (ESP) – installed to capture the heat created from the flue gas and reduce particulate emissions – now transfers to a glycol loop that travels along a pipe bridge to Lakeland’s energy transfer system (ETS) building. This building is equipped with glycol-to-hot water heat exchangers and metering to provide the heat energy required by the DES. The system then transfers thermal energy to the buildings’ space heating and domestic hot water systems through the use of each building’s energy transfer station (ETS).

The system design for the DES was created by the city with help from FVB Energy Inc.’s Vancouver office.

The City of Prince George installed approximately 5,350 metres of underground supply and return insulated steel hot water pipe – at an average depth of 1.25 metres – connecting Lakeland Mills to the downtown buildings that are hooked up to the DES system. The return pipe carries cooler water back to the Lakeland DES Interface or ETS.

“Lakeland is sending us anywhere from 90°C to 105°C hot water that goes into the system,” says Angus.

The ESP that was installed at Lakeland allows the mill to meet a contractual emission guarantee of 20 mg/nm3 at eight per cent O2 during the life of the heat supply agreement.

To ensure everything runs smoothly, a software program was created that allows maintenance staff to observe all the points in the DES, including the back-up plant, Lakeland Mills and all eight customers.

The DES system’s backup boilers are fuelled by natural gas and are designed to only turn on to top up the hot water coming from Lakeland Mills during the coldest winter weather or during routine maintenance. They have a combined capacity of 5-MW.

Saving the supply line
When the tragic accident occurred that destroyed the mill in the spring of 2012, Lakeland Mills was forced to outsource the sawmill residuals required to run the DES. Luckily, they were able to find a partner willing to do an equivalent fibre swap fast enough that the DES was not functionally affected by the tragedy.

“We were very fortunate we partnered with Canfor,” says Stewart, “When the mill went down, Canfor stepped in and provided the hog fuel.”

Biggest challenge
Stewart says that on the implementation end of the operation, the only new technology added to mill’s system was the ESP – and that install went quite smooth.

He says the real challenge is about trying to understand the objectives of your partners and making sure all parties have the right terms and an understanding.

“We have one objective as a business and they have another as a city,” says Stewart.

Stewart believes partnerships like the one that exists between the City of Prince George and Lakeland Mills can definitely be worthwhile.

“From my perspective it’s been a great partnership with the city,” he says. “It’s a project I would encourage other companies to look at.”