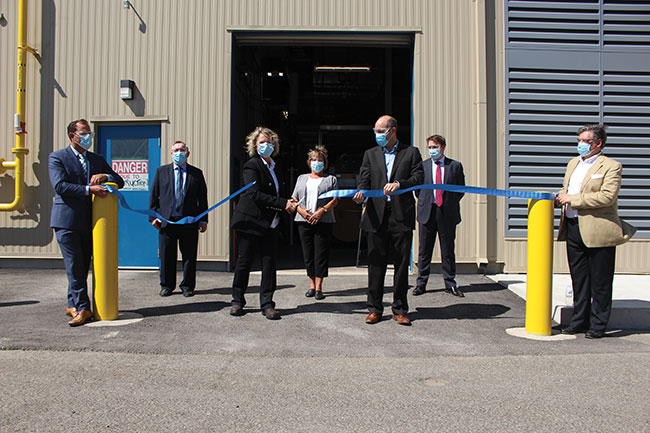 As more emphasis is placed on fostering a green economy, large businesses are investing in new ways to power their operations with renewable sources.

GM Canada is one such business. In August 2020, the company announced it had completed a $28 million cogeneration project that uses renewable landfill gas (LFG) from a local landfill to power and heat its St. Catharines, Ont., Propulsion Plant.

“One of those targets is that we source 100 per cent of our electricity from renewable sources by 2040, to support our overall vision of being a company that has zero emissions,” she says.

The project began in late 2016, when Mike Watt, executive vice-president of Walker Industries – an organics recovery company that runs one of the largest landfills in Ontario – met with Carolyne Watts, plant director at the St. Catharines Propulsion Plant, to discuss the possibility of using gas from the landfill as a source of renewable fuel at the plant.

Carolyne voiced her support and the two companies, along with their partner, Integrated Gas Recovery Services (IGRS), began planning the project. The partners ultimately agreed to build a 3.3-kilometre-long pipeline to carry the LFG from the Walker landfill to GM Canada’s plant.

“Like any good project, there was the initial timeline and then the actual timeline,” she says, laughing.

The partners ran into a few challenges along the way. The pipeline that carries the LFG runs through property controlled by the Niagara Escarpment Commission and the St. Lawrence Seaway Authority. As such, the companies needed approval for the proposed pipeline from these groups. This took much longer than expected – more than three-and-a-half years, Watt explains.

Once all the necessary plans and contracts were in place, construction began on the pipeline in 2019.

But, when COVID-19 hit in March 2020, construction was delayed for a few weeks while the companies instituted the necessary health and safety protocols.

“There were delays at both sites in terms of getting a major green energy construction project completed right in the middle of COVID,” Watt says. “That covered probably most of our construction window here, so we’re pretty happy that we managed to get this up and running through all of that.”

From waste to power
But how does landfill waste become landfill gas, and how is that gas used to power and heat the propulsion plant?

The landfill itself acts as a huge anaerobic digestor, Watt explains.

“You have a lot of organic waste in the landfill and no oxygen,” he says. “That naturally generates an anaerobic digestion process.”

That process produces two gases, methane and CO2, in roughly equal quantities. In the past, Walker burned the methane gas, which would otherwise be vented into the atmosphere.

“But, this project affords us the opportunity to collect it, just like you would with an oil field – you have wells that drill down into the landfill and you essentially just suck out the gas,” he says.

That gas is put into a large pipeline, at which point Walker cleans it up, compressing it and removing the moisture, particulate matter and siloxanes.

“Siloxanes (silicone-based compounds) are prevalent in landfill gas, and it tends to not be great if the siloxanes are burnt along with the gas in engines,” Watt explains. “Siloxanes actually oxidize onto the sides of the cylinder head and will eventually stop the engine working. So, we generally want to remove them.”

Once treated, the LFG is transported to the St. Catharines plant through the 3.3-kilometre-long pipeline. At the plant, the gas goes to what the partners refer to as “energy islands.” These islands are actually four engines that generate electricity to be used on-site. The waste heat from the engines is captured and used to heat the facility.

There are two streams of recovery for heating the facility. One is the waste gas coming off the engines as the methane is combusted. The other is the heat coming off of the engine itself, which gets quite warm during the combustion process.

“Typically, combustion of a fuel like this is about 35-37 per cent efficient. So, of the amount of energy that’s stored in that fuel, you’re recovering only about 37 per cent of it as power,” Watt says. “But, the heat recovery we’re getting at GM with these engines is up in the mid-50’s percentile. So, it’s quite a significant ability to recover as much as we possibly can of that landfill gas.”

This type of system is often referred to as combined cycle recovery or cogeneration.

“It’s worked quite well in many different places, but this is probably one of the few larger-scale applications in Canada,” Watt adds.

Impactful energy
The engines generate about 6.4 megawatts of electricity for the plant, which is just over one-third of the demand for the site, Giroux says. The impact of this is huge for GM Canada.

“It’s displacing what we would have bought from the Ontario grid. And from the recovery of the heat and distribution to the site, we’re able to reduce our greenhouse gas emissions by a really significant percentage – about 70 per cent,” Giroux says.

This, in turn, has reduced the plant’s operating costs. The initiative has also created a circular economy between the plant and Walker Industries.

“They’re our nearest neighbour; they had a waste that they were able to convert into a fuel that we’re able to use, to help make ourselves more sustainable, and that’s also helping Walker create a new business line, helping us to be more successful in the community,” Giroux explains.

It also sends a good signal to the community of continued employment opportunities at the plant, Watt says.

Barriers to overcome
While this venture has been successful for all partners involved, there are some challenges for other industrial users that might want to embark upon a similar endeavour.

“The project may not have been as successful if the landfill had been 40 kilometres away,” Giroux says when asked what factors contributed to their success. “It helped that, in the end, we only had a dedicated pipeline between the two of us that was 3.3 kilometres.

“It’s a combination of finding a good industrial site that’s fairly close to a well-established landfill site that you can find these kinds of synergies.”

“We’ve really solved an energy problem for an adjacent neighbour, rather than just putting green energy into the grid,” Watt adds. “So, to me, this is a much more efficient use of the system, where we have our landfill and a user immediately adjacent. But, those opportunities are not common.”

For smaller landfills or landfills in remote areas that don’t have major hydro connections or gas pipelines nearby, it becomes cost prohibitive, he explains.

Consequently, for more endeavours like this to come online, both Giroux and Watt believe more government support is needed. There needs to be a way to “funnel” some funding to help other projects succeed, Giroux says.

“The federal government is still talking about how they intend to return funds collected under their carbon policies, at least those collected from large industries under the output-based-pricing system. They say that they’re going to return it in order to help generate greenhouse gas reduction opportunities. These are the kinds of projects that they should be looking at,” she says.

Investing in the environment
Despite the financial barriers, both Giroux and Watt believe this is a growing market.

“We’re hoping that this is a good example to others,” Giroux says.

GM Canada is exploring using different types of renewable energy, such as solar and wind, to power their operations around the world. But which source of renewable electricity generation they use depends on location, Giroux notes. Renewable landfill gas is ideal for Canada, with its colder climate.

“Being able to work with partners like Walker and IGRS and get reliable supply of this kind of renewable fuel for a long period of time creates a real opportunity for us,” she says.

“I think that GM’s at the forefront of this in terms of their overall goal with their energy use and where it’s coming from,” Watt adds. “COVID has put plans on hold in many cases, but you’re going to see many more companies making a commitment to invest in the environment.”