June 10, 2015 - The  opportunity to expand and diversify your operation by adding a complimentary business to your portfolio are hard to find. 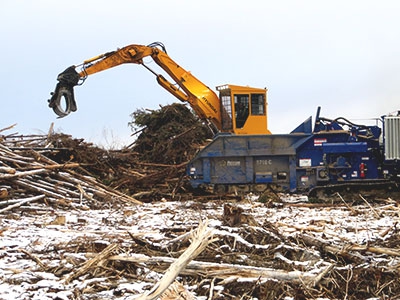 Excel Resources grinds wood in the forests surrounding Prince George for Pacific Bioenergy. The opportunity to expand and diversify your operation by adding a complimentary business to your portfolio are hard to find.

So when the opportunity to acquire a biomass grinding operation presented itself to the team at Excel Transportation Inc., the company took full advantage of the chance to add the complimentary business, in turn adding value to existing customers

Excel has been providing bulk hauling transportation and logistics solutions for customers throughout B.C. and Alberta for more than 30  years. That has included the cost-effective transportation of wood chips and wood waste to pellet plants and cogen facilities throughout the region, while also servicing the oil and gas, mining and forest industries. The company’s base of operations is located in Prince George, with secondary offices located in  Houston and Grimshaw, Alberta.

Excel uses a fleet of chip trailers, 53’ self-unloaders and end dumps to provide the most efficient logistics solutions for delivering fibre resources to the yard or the port, being flexible based on what off-loading equipment is already in place. The company counts many of the biggest companies in the forest industry in Western Canada among its customers, including: Canfor Pulp Limited, Canadian Forest Products, Canfor Green Energy, Tembec Pulp, Daishowa Marubeni International Ltd. Peace River, Sinclar Group Forest Products Ltd., West Fraser, Weyerhaeuser and Pacific BioEnergy Corp.

What has set Excel apart has been its ability to innovate to react to changing conditions in the B.C. forest industry. That includes a customized solution of extended B-trains to accommodate efficient hauling of beetle kill wood, which carries a noticeably lighter weight due to the lack of moisture when harvested.  Maximum load volumes are essential to keep costs as low as possible for customers who compete in the global market.

Opportunity knocks
The constant innovation that’s part of the Excel business model made it a perfect fit for the new business prospect that was presented to the company two years ago.

In 2013, the company was presented with the rare opportunity to purchase in an industry that would compliment its logistics operation: a biomass chipping/grinding operation that already had a supply contract in place. The available company also had the necessary equipment to begin grinding operations immediately.

“The local company was selling out, so there was an excellent opportunity to buy-in,” says Keith Brandner, operations manager of Excel Resources, a subsidiary of Excel Transportation. Brandner was hired in 2013 by Excel to run the new grinding operation as it was imperative that long term expertise support this new venture

The supply contract in place was an agreement with Pacific Bioenergy, which has the capacity to produce roughly 400,000 tonnes of pellets per year. The contract that was part of the purchase made by Excel represents roughly 100,000 oven dried tonnes of fibre. Part of that fibre is part of Pacific Bioenergy’s agreement with the University of Northern British Columbia’s Nexterra bioenergy system.

According to Brandner, the contract involves woodlands in a close proximity to Pacific Bioenergy’s Prince George pellet plant. Brandner and his team of nine run the operations in the forests within an approximate 100km radius of the plant, where there remains a high volume of beetle kill wood residues, along with broken trees and limbs and a solid amount of bush grind.

The equipment solution
One of the first challenges that faced Brandner and his team came right at the beginning of the operation.

The grinder that had been handed over as part of the buy-out was an older grinder that did not meet the needs of the new operation. As a result, Brandner had to look for a new grinding solution for the operation. That, however, was easier said than done.

Based on the semi-remote nature of Prince George in the northern half of British Columbia, some types of heavy equipment can be difficult to obtain. That includes biomass grinders, which are in limited ready supply in northern B.C.

But the research done by Brandner led him to the one company whose grinders are readily available in the region: Peterson. Peterson grinders are sold and serviced in B.C. by Woodland Equipment, which has a distribution hub right in Prince George.

Brandner worked with the team at Woodland Equipment and purchased a Peterson 5710C grinder for the Excel Resources grinding operation,

“The Peterson grinder was the right size for our operation,” says Brandner. “So we worked with the local dealer, Woodland Equipment, which is the only biomass operation in town.”

The 5710C tracked grinder features a feed opening of 60’ x 44’, capable of taking a large range of forest fibre including stumps. It includes the company’s Impact Release System, which allows the operator to switch from a consistent product-sizing mode to the floating anvil mode for primary reduction operations where accurate sizing is a less critical factor but fuel consumption is a concern. The 5710C carries an operating weight of 83,000 lbs. and it fitted with either a Caterpillar C27 or C32 engine at 1050hp.

In the forest, the Peterson has performed as expected for Brandner and his operation. On the day we joined the team, the crew was deep in the forest west southwest of Prince George. The resource roads leading to the jobsite were thin and in fairly rough shape, which must have made it difficult for Excel’s fleet of chip trucks to navigate their way to the site. However, with an average snow depth of approximately 18 inches and an air temperature around minus 15, the equipment was able to function without any difficulty.

A Hyundai forest machine was feeding branches and brush into the Peterson 5710C, grinding the wood to the spec size demanded as part of the contract with Pacific Bioenergy. The chips were being stacked along the roadway for easy access for the chip trucks, which cycled through when full loads were ready for transport to the pellet plant.

Since taking the contract in 2013, Brandner and his team at Excel have been successful in meeting the demands of the contract, and have purchased a second Peterson grinder now that the original grinder in operation has neared the end of its usable life. Both Peterson’s have been sold and serviced by the team at Woodland Equipment, which has also supplied additional equipment for the operation, including the Hyundai forest machine used in tandem with the Peterson grinder.

Without question, the relationship between Woodland and Excel has kept the grinding operation working successfully in the woods surrounding Prince George. And while there is no indication that Excel plans to expand its operation at any point in the near future, the company’s constant ability to provide innovative solutions for fibre-based operations in northern B.C. provide plenty of opportunities for future investments should the right opportunity arise.