Oct. 3, 2016 - Talby Mckay knows all about working the daily grind, literally. He has been working with biomass grinders for 18 years. 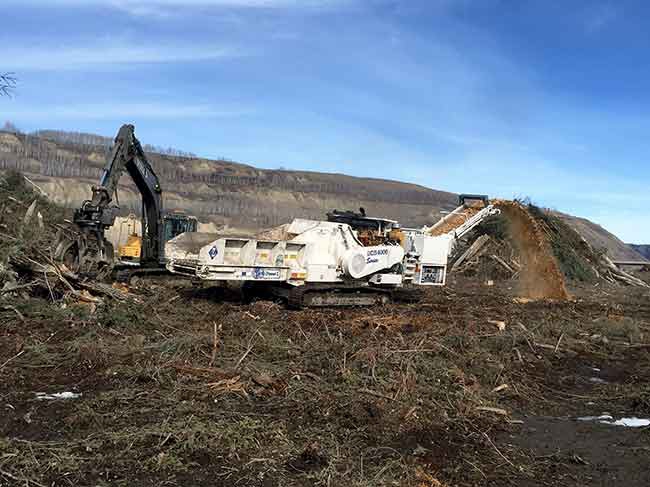 Northern Biomass Consulting has 24 sub-contractors it uses in its grinding operations and has employed upwards of 50 in its busiest seasons. Talby Mckay knows all about working the daily grind

Mckay got his introduction into grinders while working for his family’s business in northern Alberta. After securing his first biomass-grinding contract, he decided to purchase his first grinder and started managing a grinding operation in Prince George, B.C.

In 2013, he started up his own company, Northern Biomass Consulting. Mckay quickly identified a need for training and management services for grinding companies across Western Canada.

“There was a real lack of trained professionals,” Mckay says. “When you just grab an [inexperienced] operator and toss them on a machine, that’s when your operating costs go way up.”

Mckay spent a great deal of his time over the next few years training other companies’ employees on how to maintain and operate equipment for grinding operations. Eventually his company grew and he was able to obtain bigger contracts to do bigger jobs for a variety of companies across the biomass industry.

“I’ve been working with Enbridge and Trans-Mountain and just finished the first phase of Site C Dam,” he says. “I had six grinders on site grinding all at once.”

One challenge Mckay has encountered on some of the larger projects he works on is finding a home for the biomass he grinds up.

“On [Site C Dam] there was no market for it, but we are working on projects to get rid of that biomass up [in Northern Alberta],” he says. “One markets is to grind it and sell as absorbent in the oil patch. Working with biochar companies is an option as well.”

Mckay and his crews are also doing some work for landfills, one being the Municipality of Wood Buffalo in northern Alberta.

“The Municipality of Wood Buffalo has done a lot of good stuff trying to create a biomass market for biomass as absorbing materials in the oil patch,” Mckay says.

Sawmill services
Another market Mckay has been able to tap into is offering sawmill sites a few different processes that allow for significant fibre recovery for the mills.

“We’re currently doing a project for Lakeland Mills right now, taking their old waste and putting it through a different screening process,” Mckay explains. “We’ve had three grinders in the last few years that have been beat up. So we brought in a few processors that can separate the rock out of the wood. We’re getting about 65 per cent recoverable fibre out of the wood going in and reclaiming their old legacy piles, trying to get a return on that material.”

“We’ve been doing projects with Pinnacle Pellet and Pacific Bioenergy,” Mckay says. “With the shut down in Quesnel, Pinnacle has curtailed a few of its operations and we’re waiting to get back in the bush. With Pacific Bioenergy we have done some fill-in work for blocks.”

Trucking system
As any biomass harvester or pellet producer will tell you, managing logistics costs are vital for operating an economically viable biomass operation.

Northern Biomass Consulting pre-loads all of its trucks to reduce transportation costs.

“Trucks go pin-to-pin and it allows for an extra two to three loads per day,” Mckay says.

Northern Biomass Consulting has 24 sub-contractors it uses in its grinding operations and has employed upwards of 50 in its busiest seasons.

Grinding tech
One of the reasons for the success of Northern Biomass Consulting is because its contractors invest in the latest grinding technologies.

“People don’t know the true production of their operations,” Mckay says. “The scanning capabilities open up the eyes of the grinder and the suppliers.”

Frontline’s Sensortechnik optical belt scale (SOBS) is a non-contact belt and conveyor scale for the measurement of bulk materials and production for the construction, mining, mulch and biomass, quarry and sandpit and waste and recycling industries. The heart of the Sensortechnik optical belt scale is an electro-optical sensor, which performs the material volume measurement in a totally contact-free manner. This feature completely eliminates wear-and-tear, unlike traditional scales where replacing load cells create down time and reduce your operations productivity.

Mckay says the grinder’s scanning capabilities has allowed him to bid for jobs with far better accuracy.

“We bid according to cubic metres – I just put bid into District of Shuswap. They pay by the bucket load and pay a cubic metre based on a bucket load.

“I’m using Diamond-Z because they brought in those scanners, it’s a heck of a machine, very good grinders,” Mckay says. “The machines we use now all have the scanners that are on the Diamond-Z. A grinder has to have to have a scanner on it to work for Northern Biomass now. It also helps us know full costs per cubic metre to grind wood for each machine – fuel consumption, production, etc. It’s an easy way to keep track of production rates.”

In addition to Diamond-Z, Northern Biomass Consulting has a collection of Peterson Pacific, Bandit Industries, Vermeer and Doppstadt grinders and shredders at its disposal to tackle a variety of operations.

With his eye on the latest technologies, Mckay is ensuring that Northern Biomass Consulting will be grinding for years to come.