August 10, 2015 - When Groupe Savoie opened its wood pellet plant in Saint-Quentin, N.B., five years ago, the company was producing 42,000 tonnes of wood pellets per year. Approximately 90 per cent of that production was being shipped overseas for industrial use in the U.K. 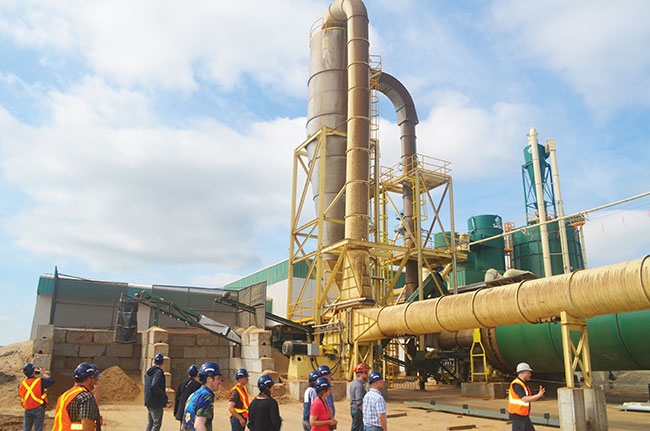 Since the inception of the plant, the European industrial grade pellet market has continued to be Groupe Savoie’s biggest customer. However, this year’s long, harsh winter created a shortage of residential grade domestic pellets for heating applications and left homeowners across New Brunswick scrambling for pellets. This left some homeowners frustrated at the fact that some companies were continuing to generate pellets to fulfill contracts overseas, while residents were experiencing a shortage on the domestic side of the business. This is despite the fact that pellet companies’ overseas contracts would have been negotiated long before one could know that a harsh winter was approaching and that ash contents for residential grade pellets in Canada differ from industrial grade pellets being shipped overseas.

In an effort to fill the gap and help avoid future shortages close to home, Groupe Savoie decided to dedicate a percentage of its industrial production to producing more residential grade pellets. The company will now have a fifty-fifty split between domestic pellet production and exported industrial pellets.

On a typical day, the plant runs seven days a week, 24 hours a day. The company currently produces 70,000 tonnes of pellets annually for use domestically and overseas, and plans to produce an additional 20,000 tonnes, or more, after the plant completes the installation of its new burner.

The company is almost completely self-sufficient with its raw materials – sawmill and harvesting residuals.

“We only purchase a small amount of softwood sawdust,” says Jonathan Levesque, Groupe Savoie’s vice-president of marketing and development.

The plant was shut down this past June for the installation of a new Wellons FEI burner, which can generate upwards of 55 million BTUs of heat.

“Over the years we did some modifications to improve production, and right now the bottleneck of the plant is the burner,” explains Levesque.

Pellet process
The wet fibre begins its journey from the yard courtesy of either the company’s 644K series John Deere wheel loader, which is dedicated solely to pellet plant operations, or one of the company’s Volvo L90 or L110 series wheel loaders, that are used as backup when the John Deere is up for maintenance or is too swamped to keep up with production. Here, the wood chips are loaded into bins and are sent to one of the plant’s three Wellons FEI walking floors – one for feeding the bark to the burner, one for providing hardwood and another for mixing in small amounts of softwood to aid in binding the hardwood, depending on the grade of pellet being produced.

“That way we can control the mix for whatever is needed for the pellet recipe,” explains Levesque.

The biomass from the forest isn’t separated after it is chipped, which can create some challenges.

“This is tricky to pelletize because you don’t know the amount of hard maple, birch and aspen,” says Levesque.

To help with the process, Groupe Savoie keeps track of the recipes it uses and where the biomass is coming from.

The wood fibres are then sent through an Oliver destoner, and into a screw conveyor to the plant’s MEC dryer. Once in the dryer, the fibre runs the length of the dryer three times for a “triple pass,” then goes into the drying cycle, where the water from the wood is converted into steam and exhausted out a stack through the use of a fan, while the remaining dry fibre goes into a Schutte Buffalo hammer mill.

“The hammer mill is basically making wood flour, really tiny pieces,” says Levesque. “Ninety-nine per cent is under four millimetres and the majority of it is two millimetres.”

After the wood fibres leave the pellet mill, they are sent to one the plant’s three Andritz pellet presses, which use extrusion wheels that pressurize the fibre into its wood pellet form.

Each press can generate approximately four tonnes per hour.

The pellets are then screened to remove unwanted fines and dust; and are sent to the cooling tower to reduce the chance of pellet breakage during the handling phase. Afterwards, they are sent to the company’s Premier Tech bagging line, where a Fanuc robot stacks the bags of pellets on skids and they are wrapped and ready to be shipped.

Dust management
To manage dust in the pellet operation, the company decided to place the hammer mill in a separate building, away from the rest of the operation.

“The risk factor has been put outside,” explains Levesque. “We haven’t had any issues in the past five years. We have a detection system in place.”

“If there’s a spark, the spray system acts right away,” says Levesque. “And if the spray system doesn’t extinguish the spark, there’s a deluge on top that will flood the whole system. It may have gone off two or three times in the past five years, but we’ve never had any major issues. A well-designed pellet mill will significantly reduce the risk of a fire.”

With Groupe Savoie doubling its domestic pellet production, the province’s wood pellet-consuming residents will be better prepared to battle the next harsh winter that comes to New Brunswick. No matter what the frigid temperatures might be next year, these residents are likely in for a much more comfortable and warmer winter.

A major player
Groupe Savoie is a major employer in New Brunswick, employing more than 600 people with the majority of its operations in northern New Brunswick, where it has felling rights over a vast expanse of hardwood forest.

Keeping on truckin’
Another investment the company made recently for its pellet business is the purchase of a Western Star 15-ton capacity, vacuum delivery truck to service its domestic market across the province.

“This is the first real vacuum delivery truck in Canada,” says Levesque. “It’s basically a grain truck to blow grain, but this one is designed to handle pellets more gently.”

The truck features a vacuum system that has neutral pressure when it delivers pellets to silos and hoppers, reducing potential breakage of the wood pellets upon delivery. The truck’s tank system was built in Maine.

“We want to supply customers via a ‘milk run’ style,” says Levesque.