Jan. 5, 2017 - The past few years have been challenging for wood pellet producers and pellet production project developers. A temporary plateau in demand growth for new co-firing or full conversion power plant projects in the industrial pellet market has led to an excess of production capacity. A series of warm winters in Europe compounded by low fossil fuel prices have depressed demand for pellets and new pellet stoves and boilers in the heating pellet markets. What will the future bring to the wood pellet markets? This article will try to answer that question. 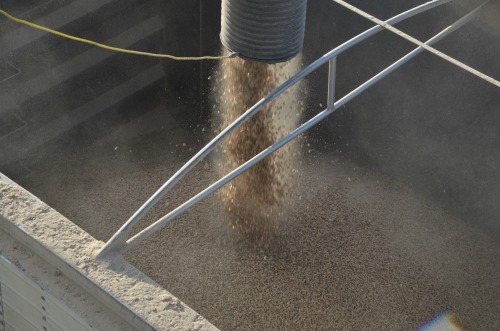 Wood pellet markets comprise two primary sectors: industrial wood pellets that are used as a substitute for coal in power plants, and premium pellets used in pellet stoves and pellet boilers for heating.

The industrial wood pellet market is expected to grow significantly. The chart below shows the historical actual demand and forecast potential demand for the industrial wood pellet markets. Current (2016) aggregate demand for industrial pellets is estimated to be about 13.8 million metrics tonnes per year. That is the equivalent of a large bulk carrier ship carrying 40,000 tonnes about every day. 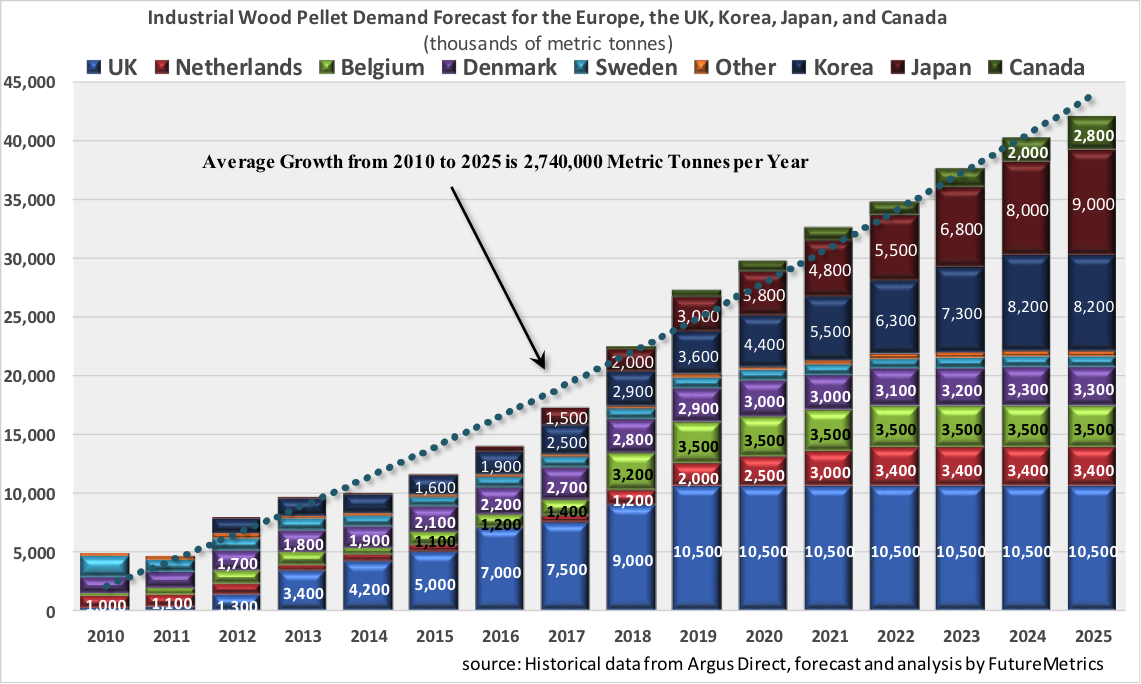 Future demand in the U.K. and E.U. is expected to plateau by 2020. However major growth is expected in Japan, and Korea in the 2020s. Canada has the potential to experience increasing demand for industrial pellets. That is due to decarbonization policies from the Canadian federal government and specific policies in provinces such as Alberta. FutureMetrics has two recent presentations with details on the forecasts for Canada and Japan. The presentation on the Canadian markets with a specific focus on Alberta is HERE. The presentation about the Japanese markets is HERE.

Over the 15 years from 2010 to 2025, the average annual increase in demand for industrial wood pellets is expected to be about 2.7 million metric tonnes per year.

Presently, there are too many pellets chasing too few buyers. The buildup of production capacity based on demand forecasts from a few years ago has resulted in a current state of excess supply in the industrial wood pellet sector. As a result, spot market prices for industrial wood pellets have hit historical lows. 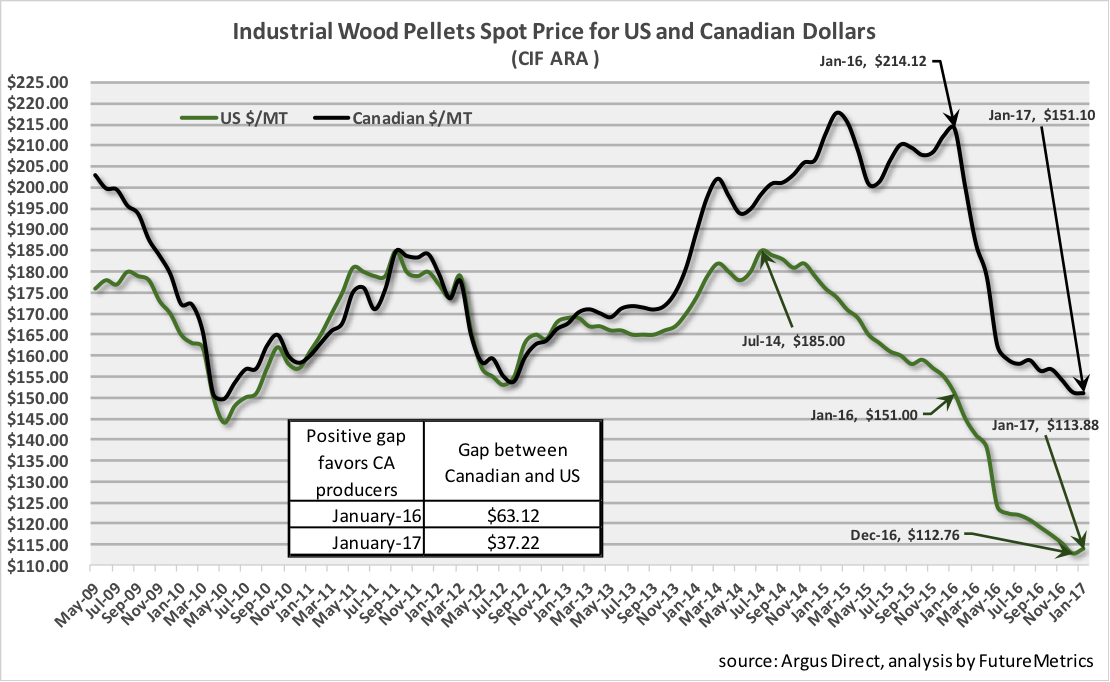 The industrial pellet oversupply is compounded by increased production in eastern Europe and decreased demand for heating pellets in Europe due to above average temperatures the last three winters. But with several large power stations – Lynemouth and MGT in the U.K. and Langerlo in Belgium – coming online in 2018, the oversupply will be soaked up by the new demand. Drax’s unit 1 will be full-firing (from 85 per cent co-firing) very soon, adding about 330,000 tonnes per year of increased demand. As of early January 2017 it is still unclear if the Dutch markets will begin co-firing. If they do, new industrial pellet demand could increase by an additional 3.5 million tonnes per year.

That new demand, combined with growth in the Japan and South Korea, will soak up the current excess capacity and is expected to bring CIF ARA (cost, insurance and freight in the Amsterdam-Rotterdam-Antwerp area) spot prices back into line with the long-term averages. 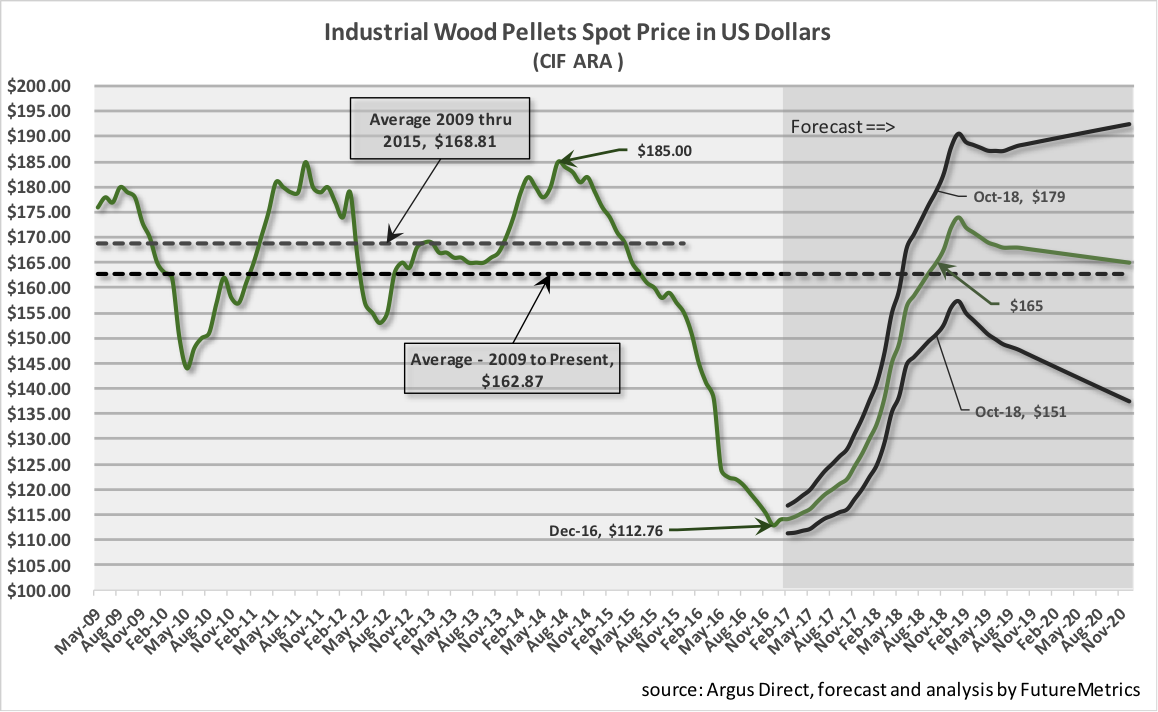 The forecast assumes that the supply/demand disequilibrium that currently exists is corrected after several large pellet-consuming projects described above come on line. The forecast also assumes that production capacity will not exceed demand and that the heating markets absorb normal quantities (i.e., normal winter temperatures).

Using ag-waste for pellet fuel has many challenges. The big issue is that ag-wastes are high in abrasive silica and corrosive chlorine. Both are highly problematic for utility pulverized coal boilers. At low co-firing levels, those issues might be diluted to a level that is acceptable. But at higher co-firing rates non-purpose built boilers that are not designed for ag-wastes cannot use ag-pellet fuel.

The 2016 to 2020 five-year plan has explicit support for pellets. If China were to embrace co-firing of wood pellets, even at modest ratios, the internal demand would be very large. The chart below shows that at a five per cent co-firing rate, in 2020 if only 16 per cent of China’s coal power plants are co-firing, demand would be almost 40 million tonnes per year.

What will happen in China over the next few years with respect to wood pellet demand is very uncertain. If that market opens up to foreign imports of wood pellets, it will not only be massive, but depending on their requirements for sustainability (or not) it could be disruptive.

The heating pellet sector has grown steadily in the past decade. Unlike the industrial pellet sector which is policy driven, the heating pellet markets are primarily driven by the comparative costs of heating fuels. Pellets have historically been the lowest cost fuel for heating in most regions. Low crude oil prices and therefore low heating oil and propane prices have recently challenged pellets’ position as the lowest cost heating fuel. The chart below shows the recent price history of crude oil and heating oil and further shows that at about $62.50 per barrel, heating oil prices will be about at breakeven with wood pellets for the equivalent energy (assuming $245 per ton pellet price). Retail heating oil prices are at least $0.50 per gallon higher than the NY harbor spot price shown in the chart. In some jurisdictions retail heating oil prices are nearly $1.00/gallon higher than the NY harbor prices. 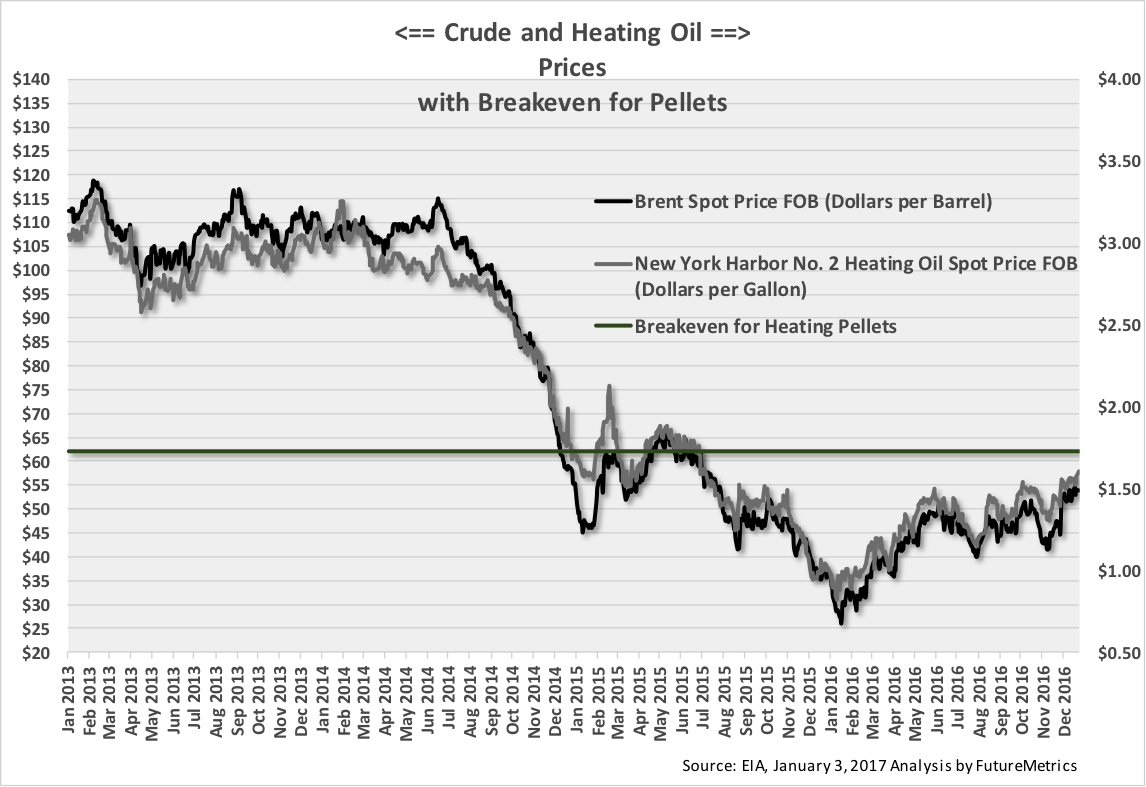 The final chart in this article shows historic and forecast demand for heating pellets in the major countries that use pellets for heat. The chart shows the current and expected below trend growth in the global premium heating markets for 2015-2017. The below-trend growth is a result of several warmer-than-average winters and low crude oil and heating oil prices.

Based on expected petroleum prices from 2018 onwards it is likely that the heating pellet markets will resume their traditional growth. The heating markets are forecast to have an increase in demand of about 9.5 million metric tonnes per year from current levels by 2025. 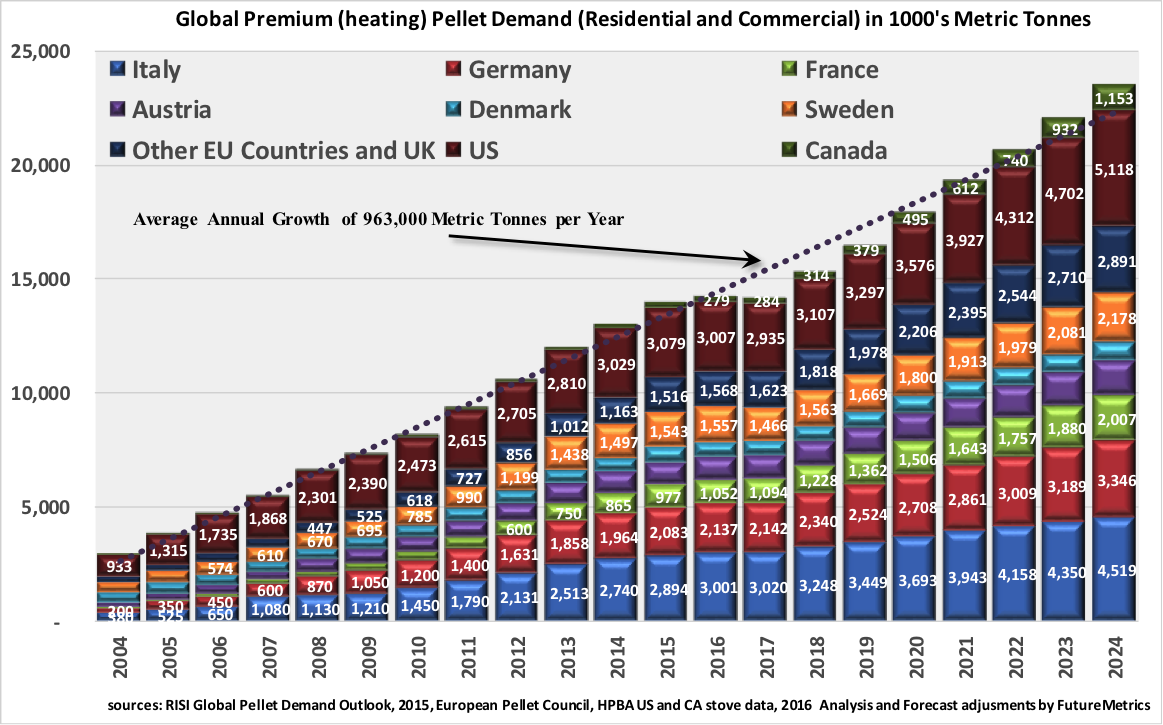 The fundamentals for significant growth in the heating markets are sound. The near-term challenge is the cost of alternative heating fuel.

In most of Europe, where many countries have high taxes on heating oil, demand is more driven by weather than by oil prices.

In the U.S., heating pellet market growth is highly correlated to heating oil prices (and to propane prices in the Midwestern states). The larger the gap between the breakeven price of heating oil versus pellets the more demand for pellets grows as pellet stove and boiler sales increase. Weather always will create variation around the mean annual demand; but higher growth depends on oil prices rising above about $63 per barrel.

The Canadian heating pellet markets are relatively small. But in a few provinces, there is potential for significant growth. FutureMetrics published a paper on the subject that can be downloaded HERE.

The industrial pellet markets are all about carbon emissions and renewable energy policies.

The E.U. and U.K. markets are expected to plateau in the early 2020s. The industrial wood pellet market needs to look beyond U.K. and E.U. demand to find growth in the next decade.

The areas in which 2020s and beyond offer significant industrial pellet demand growth are Japan, Korea, and potentially China.

A press release from Argus Direct on Jan. 4, 2017 notes that South Korea plans to increase investment in alternative energy sources by about 25 per cent to almost 14 trillion won ($11.6 billion) this year. South Korea is the Asia-Pacific’s biggest importer of wood pellets. According to the Korea Forest Biomass Association, its imports may climb from 1.5 million tonnes in 2015 to more than 8.5 million tonnes in 2022.

The U.S. had the potential to generate tens of millions of tons of pellet demand by 2030 if the Clean Power Plan had been implemented. Under the Trump administration, the CPP is expected to be abandoned. There is still a chance that the U.S. could implement policy that would support the use of pellets in coal-fired power plants. A recent white paper explains how and can be downloaded HERE.

The expectations for the future of wood pellet markets are optimistic. If our forecasts are correct, more than 30 million tonnes per year of new demand by 2025 will drive more than $7 billion of investment in new production capacity worldwide.

William Strauss, PhD, is the president of FutureMetrics. Download all FutureMetrics presentations, white papers and dashboards online for free at www.futuremetrics.com.