Jan. 9, 2017 - Almost three years ago, the Old Massett Village Council operating on the north shores of Haida Gwaii in British Columbia made a decision to set an example in the community and the region by reducing their dependence on expensive, carbon-emitting fossil fuels to heat their community buildings. 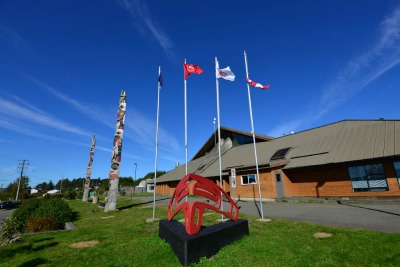 At the time, all their community buildings were heated with a mixture of propane, oil and electricity from diesel-fired generators. If council wanted the community to start switching to renewable energy sources and reducing their carbon footprint, it was felt that they should set an example and take the lead.

At this time the council had bought a 50 per cent ownership share of the only sawmill of note on Haida Gwaii. In addition they had worked with their new partners to add a briquette plant to deal with the wood waste. This presented an opportunity to use these briquettes to fire a high tech wood biomass boiler by way of a centralized heating system for their main community buildings. These building comprised of a community hall, the band office, a health center, the social development and child family services building and an elementary school. Also both the school and the health center had expansion plans in the works and so an appropriate sized unit was required.

The result of an intensive investigation of boiler options led us to Fink Machine Inc. located near Vernon, B.C. We found Fink assembles a high tech set of boilers to fit all needs and their reputation was solid from discussions with their customers. Our discussion with them led to the selection of a Viessmann boiler large enough to heat all of the above and also accommodate some additional needs of council; a community swimming pool and some commercial green houses to provide fresh vegetables to our remote location where these are prized and sought after.

Once we had tabulated our present use and identified our needs it was determined that we should install a 720kW Pyrtec biomass boiler that would be fuelled by the wood waste from our sawmill. This would give us ample heat to accommodate all of the above including the expansions and the greenhouses and swimming pool. At the same time we would reduce our heating costs for the present buildings by more than $130,000 per year and our carbon footprint from more than 260 tonnes of C02 each year to 10 tonnes of C02 per year, which is about the same as if we’d left the wood waste in the bush to naturally decompose. Once we add in the demand from the expansions, swimming pools and greenhouses these savings and emission reductions only increase exponentially and the business and environmental case becomes stronger.

Today, we are approaching the commissioning of this $1.3 million initiative. We have accessed more than half form clean energy funding programs and have financed the balance. Once we committed to the bank that we would be prepared to keep paying the traditional heating costs but divert the balance saved by the new biomass boiler to financing a loan, the bank immediately agreed. We have determined the payback would be less than 10 years.

In addition we have all but eliminated our carbon footprint, become self sufficient as far as heating goes, reduced demand on Hydro’s diesel fired generators thus reducing tanker traffic to Haida Gwaii. Above all we’ve set the standard to our community and the region to move to clean renewable energy and greatly reduce our impact on the environment.