October 13, 2015 - Mathieu LeBlanc is passionate about restoring the Acadian forests in New Brunswick. So passionate, that he quit his job at a forestry consulting firm in Western Quebec, sold his home, and moved himself and his pregnant wife to the Moncton area. Once there, he started up his forestry restoration and management business, ACFOR – an acronym for “Acadian Forest” – and so far, the gamble has paid off. 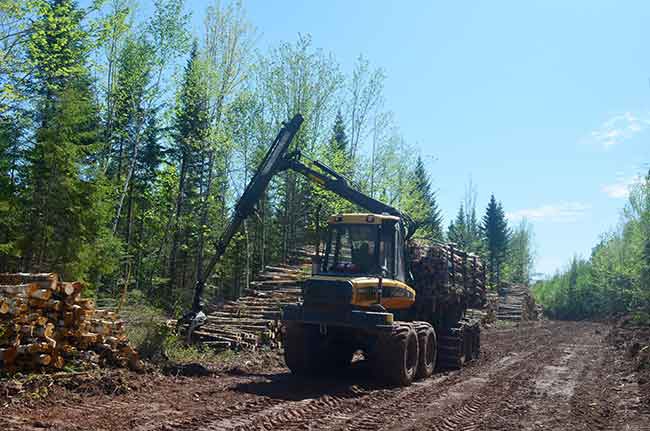 One of ACFOR’s two Ponsse Wisents piles logs at the company’s Turtle Creek operation in Riverview Mathieu LeBlanc is passionate about restoring the Acadian forests in New Brunswick.

ACFOR performs integrated wood harvesting as part of its restoration and management services, where they harvest wood for a variety of purposes for private wood lot owners and the local municipalities in the Moncton area – Moncton, Dieppe and Riverview. The company harvests stud saw logs, poplar for OSB and firewood, in addition to harvesting the waste for biomass-to-energy projects in P.E.I.

ACFOR moves all of its wood through the Southern New Brunswick Forest Products Marketing Board (SNB).

“They negotiate contracts with all the local mills,” LeBlanc explained, while offering a tour of his operation at Turtle Creek in Riverview, N.B.

His goal is to make woodlot management a pleasurable and enjoyable experience for woodlot owners; ensuring that they get the maximum return on their forests for generations to come.

How it all started
While living in Gaspe, Que., LeBlanc and his then-girlfriend-now-wife graduated post-secondary schools their respective degrees – LeBlanc with a degree in forestry and his wife with a degree in environmental sciences.

“She was trying to save the trees and I was cutting them down,” jokes LeBlanc.

After graduating, the couple moved to Montebello in Western Quebec and LeBlanc went to work for a forestry consulting firm that specialized in multi-resource planning in recreation, wildlife and forestry management.

“We were in charge in the Outaouais region, the Laurentians, Montérégie and the Ottawa region,” he said. “We mainly worked with private wood lot owners.”

LeBlanc really enjoyed the hands-on, project management experience he obtained while working for the company.

“They put you there with 25 harvesters and said, ‘Listen, you’re going to be in charge of this project,’” he said. “That company gave me a lot of experience in this field. The philosophy of the company was to always improve the quality of the wood lot [through selective harvesting].”

During his six years with the company, LeBlanc went back to school part-time and obtained a certificate in project management.

When his wife got pregnant in 2006, they had a serious talk about where they want to raise their family and work.

“The sawmills were closing down, all the companies were going bankrupt, and I said to my wife, ‘There’s nobody restoring the Acadian forest [in the Moncton area]. Why don’t we both quit our jobs, sell the house and I’m going to try and start a forestry management company,’” he said. “Without hesitation she said ‘yes.’ I was very lucky that she supported me from the get-go.”

Of course, the fact that Moncton was his wife’s hometown didn’t hurt.

The opportunity LeBlanc saw for his forest management company stemmed from wood lot owners in the area having limited options for their forests.

“Basically the wood lot owners had two options: clear-cut or conservation, nothing in-between.” he says. “For me, it was the best time to start the business because machinery was cheap, although financing it was a challenge.”

LeBlanc started by managing one wood lot where he performed selective thinning and the business quickly grew ‘like wildfire.’

“People who hadn’t cut their wood lots when the prices were high, those were the people that called me,” he recalls. “They said, ‘You’re doing what we wanted. We’ve been waiting for someone like you for a long time – that cares about the forest and manages the ecosystem, wildlife and recreational [activities].’”

Through word-of-mouth the company was successfully obtaining contracts from a variety of wood lot owners, and eventually landed a three-year contract to manage the municipal forests in Dieppe, Riverview and Moncton.

Switching gears
Most of the forest residuals ACFOR collected in its first few years of operation were sold to pulp mills. This changed in 2010, shortly after Ponsse designed a new harvester called the Ponnse Fox. LeBlanc says he was the second one to buy the vehicle in North America.

“I knew that machine was a great tool to do thinnings, so I called up Alpa Equipment and said ‘I want that machine.’ Then convinced my banks it would increase productivity,” he said.

It turned out to be a more sound investment than LeBlanc expected.

“A month after I bought the machine the pulp market crashed and my pulp prices were cut by 50 per cent,” he says. “But with the new Ponsse Fox we increased our productivity by 40 per cent.”

Even with the reduction in pulp prices not affecting him as much as it could have, prior to his Ponsse purchase, LeBlanc knew he needed to find an alternative to selling his residuals for pulp.

“I was walking around the forest looking at all the waste and thought, ‘This is energy here,’” he says.

So LeBlanc called up KOB, a biomass boiler manufacturer now owned by Viessmann, and inquired about recent installations in the Maritimes.

“They said ‘Yeah, we just installed a boiler in P.E.I. at Evangeline School,’ so I went to see the system,” he says.

The timing of the tour worked well for ACFOR. P.E.I.’s government was looking for ways to move away from dependence on fossil fuels and become energy independent. In 2012, the P.E.I. government decided it would replace fossil fuel-powered equipment with biomass-fuelled boilers in facilities across the province. The government released a tender to install biomass boilers in more than 20 facilities across the province.

“We got a lot of those contracts, I think 12,” recalls LeBlanc. “We’re installing those now. So far, we’ve installed eight.”

The business model for the projects is that LeBlanc’s company pays the capital to install each system then the facilities buy the heat back from ACFOR based on a 20-year contract.

“This gives us stability,” explains LeBlanc.

“I’m trying to promote more young people to get into the field,” he said. “What we look for are young people with good attitudes that want to restore the Acadian forests. That’s the starting point.”

People who are passionate about restoring the forests have a tendency to learn the necessary skills for the jobs relatively quickly, adds LeBlanc.

In addition to helping sculpt the forest industry’s next generation of harvesters and managers, ACFOR is technologically savvy, which is another good reason to hire a younger generation of workers.

ACFOR offers wood lot owners a real-time web platform they can use to see the progress of operations in their lots without being in the field. The company’s online project management system, allows the lot owners to see photos, deadlines, wood delivery reports and more. The web platform also allows for individuals to leave comments regarding the operations that can be shared with family and friends.

Powered by Ponsse
LeBlanc loves using Ponsse equipment in his selective harvesting operations, and it shows in his lineup.

Ponsse make an active effort to listen to its customers and hear about ways to improve the equipment.

“We have a good relationship with the engineers at Ponsse, they always listen to us,” says LeBlanc.

Getting owners involved
LeBlanc likes to get the wood lot owners heavily involved in his company’s operations. He calls it, “The ACFOR experience.”

“We’ll invite the family and do a course in the woods about why we are trying to regenerate the forest, and what are the tolerant species. Basically we use the lot owners as our marketing, so they can educate their neighbours about why we are doing this and why it’s important.”