Paul Stevers with Think Renewables Group explains how combining complementary technologies can result in a profitable transition to a low-carbon economy. 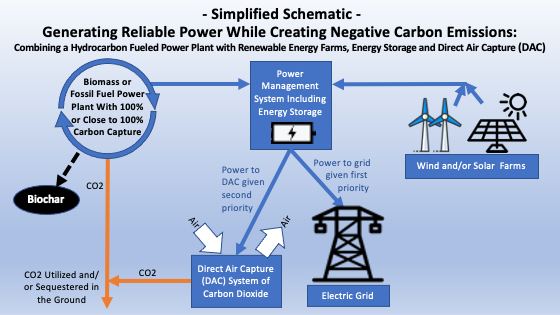 A major opportunity has emerged to generate reliable power while capturing and sequestering carbon dioxide (CO2) from the atmosphere and can be implemented on a global scale. This is now possible due to advances in four key technology areas that can be combined into one larger system. Biomass or fossil fuel power generation with carbon capture, direct air capture (DAC), energy storage, and renewable energy can be combined to provide reliable power to the electrical grid and generate substantial negative carbon emissions at the same time.

In addition to scaling up renewable energy, this will help the hydrocarbon-based energy sector transition to and participate in a low-carbon economy. If implemented around the world, this approach could reduce carbon emissions by billions of tonnes per year, while creating major economic opportunities.

Utilizing biomass for power generation enables an even greater negative carbon emissions than when using fossil fuel in this type of facility since the biomass is already carbon neutral. As well, while generating energy via biomass, another valuable product can be produced called biochar. Several commercial-scale systems are now available that can produce both energy and biochar at the same time. The biochar is produced by heating the biomass in an oxygen-limited environment using some of the energy released from this biomass. After this biochar is produced, it has many uses including significantly increasing the productivity of soil for growing food.

Since producing biochar from biomass and incorporating it into soil is an internationally recognized way of removing carbon from the atmosphere, substantial money can be earned by creating this biochar. Even more beneficial than creating biochar is combining it with nutrients and utilizing it in soil. For example, one study found that biochar combined with compost increased average crop yield significantly by 40 per cent compared with the control, which was soil with only compost.

Facilities that enable long-term carbon storage have been rapidly growing and there is now increased availability of climate finance such as carbon-tech funding.

This, combined with the technologies mentioned above, has created many new business opportunities. To view a 3.5 min. animated video along with links to more information about these opportunities, see: Business Opportunities Creating Large-Scale Carbon Emissions Mitigation.

Several funding sources are available to accelerate technology development and scale-up, such as venture capital, government grants and related incentives, private grant funding, crowd-funding, and loans. To help companies obtain capital to build a facility, online platforms like Puro-Earth help facilitate long-term off-take agreements for the carbon that is expected to be captured and stored by this facility. If a project is sufficiently large, it can be refinanced with a Green Bond after it becomes operational and generating income, which will make it even more attractive to investors.