Aug. 10, 2016 - The Prince George Civic Centre filled with bioenergy professionals from around the world to take in a host of sessions at the seventh International Bioenergy Conference and Exhibition in Prince George, B.C., this past June. 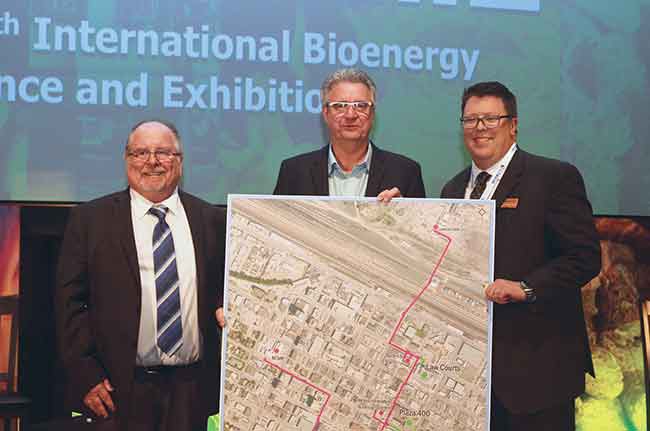 Prince George announced the expansion of its district energy system to include the heating of two more provincial buildings – the province’s courthouse and the Plaza 400 building. The Prince George Civic Centre filled with bioenergy professionals

Prince George Mayor Lyn Hall welcomed the 260 delegates in attendance to the conference. Hall discussed the importance of the forestry sector, including the bioenergy sector, to the city’s culture and its community.

“For us in Prince George, there’s no question that the forest industry is the foundation of our community,” he told the crowd. “We have upward of 3,000 people employed in those industries.”

Opportunities and challenges
“Where do you see opportunities and risks for the bioenergy sector in the next decade?” That was the question posed to the participants of an executive panel session during IBCE 2016.

Gordon Murray, executive director of the Wood Pellet Association of Canada, stated that the wood pellet sector remains the most successful and vibrant sector in the bioenergy industry. However, the sector’s historical biggest challenge still remains an issue that needs to be addressed.

“Domestically here in B.C., fibre supply does continue to be our No. 1 issue,” he told the crowd.

Although the B.C. government has put together a 13-point fibre action plan, Murray said it has yet to assist bioenergy producers in securing additional fibre.

“We do acknowledge that they’ve had good intentions and put a lot of effort forward, but the implementation of this has been frustrating and it has not resulted in any more fibre for us,” he said. “We’d like to see a ban on all slash burning with an exception where the producers can prove that there is no viable option for the residuals.”

As for new opportunities for the wood pellet sector, Murray discussed overseas growth markets such as Japan, which has abandoned nuclear power and has been building biomass-fuelled power plants.

Doug Hooper, director of policy and regulation at Advanced Biofuels Canada, discussed the opportunities for the bioenergy sector related to carbon pricing.

“There’s a large stimulus coming from the carbon funds back into our sectors,” he said.

Hooper added that there would be a long-term reliance on energy dense liquid fuels, including lower carbon renewable biofuels; however, he added that the bioenergy sector needs to improve telling its story on how the sector offers a reliable and versatile source of energy.

“Bioenergy has really got a strong story to tell and I think one of the challenges is how do we tell our story better,” he said.

Carrie Annand, executive vice-president of external affairs for the Biomass Power Association discussed biomass policy in the U.S. She said that one challenge in the U.S. bioenergy sector is getting the different states to acknowledge the positive impacts of a strong biomass industry, including keeping foresters employed, keeping forests intact and creating homes for residuals. She added that you could see the positive affects of the sector in the U.S. states where bioenergy has been embraced.

Michael Weedon, executive director for the B.C. Bioenergy Network added that the bioenergy sector in B.C. needs to realize that the province doesn’t live in isolation and has to acknowledge global competition.

“We have to offer cost-effective, competitive solutions,” he said.

Weedon added that by focusing on finding “negative carbon” solutions, the province of B.C. will help allow the bioenergy sector’s innovators to come up with profitable solutions.

Business case for managing wildfires
One speaker during the panel sessions put forth an interesting wildfire strategy that also has the potential to provide an economic stimulus for the region while servicing home heating needs for people in northern B.C.

David Dubois, chief of engineering and technical outreach specialist for the Community Energy Association, told the crowd that there is great potential for local managing of high-risk wildfire areas in northern B.C. communities while simultaneously harvesting biomass in a sustainable manner for use in residential heating.

“There’s a real opportunity and need to increase the amount of work being done,” he said.

Dubois offered a few examples of successful projects already completed in the region, including Telkwa’s biomass district heating system, which is fuelled by wood chips and materials from their own wildfire mitigation management system.

Telkwa is a small village with a population of about 1,350 people located just southeast of Smithers, B.C., about 350 kilometres northwest of Prince George.

From a life cycle cost point of view, biomass is competitive with many of the other energy options in communities with little or no access to natural gas pipelines. One major benefit for adopting a local biomass system for residential heating is that the jobs generated for installing and maintaining these types of systems, and harvesting the biomass, would mean a large portion of the money spent on fuelling residents’ home heating needs would stay in the local economy.

“I think biomass can be a real benefit to rural and remote communities,” he said.

Another example of a town that could benefit from this type of system is Sicamous, B.C., which has a high risk of wildfire.

DuBois said that after the initial thinning for wildfire prevention is performed, the Sicamous area could manage the regrowth of those areas through harvesting for residential heating. He said that area has anywhere from 26,000 to 32,000 tons of biomass available from managing regrowth that could be used as a base case for fuel for a district energy system to supply 80 to 90 per cent of the total heat load with other fuels used for meeting peak heat demand.

He added that putting these types of systems in place in remote communities aren’t without their challenges.

“The biggest challenge for small communities is capacity,” he told the crowd, adding that sorting out ownership of fibre is another issue that needs to be addressed for these types of systems to be successful.

Prince George announced the expansion of its district energy system to include the heating of two more provincial buildings – the province’s courthouse and the Plaza 400 building.

Prince George expands DES
Another highlight of the conference was the announcement that Prince George is expanding its district energy system (DES), which fuels many of its downtown buildings. The expansion will include heating of two more provincial buildings – the province’s courthouse and the Plaza 400 building.

Ninety-six per cent of the energy used in the DES system is supplied by waste heat generated by burning hog fuel from Lakeland Mills, with the remaining power coming from two 2.5MW natural gas back-up boilers that are used when the mill shuts down for maintenance, or if the system requires additional heat during harsh winter months.