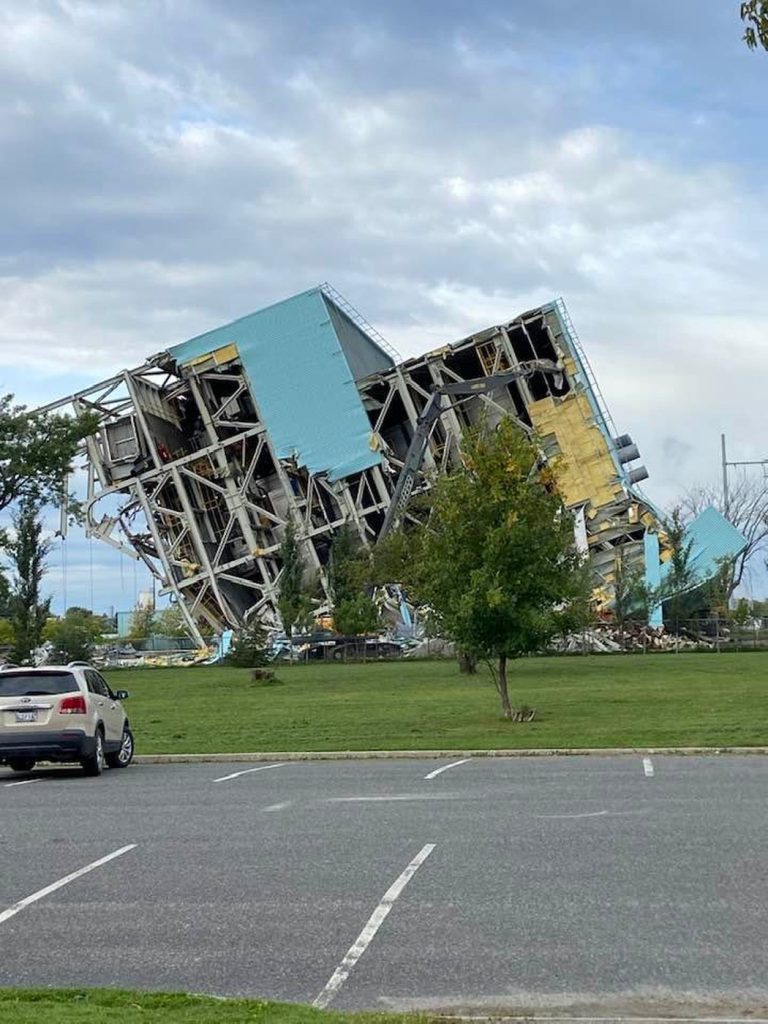 The biomass boiler at the former mill in Fort Frances was brought down by controlled explosives on Friday Sept. 23, 2022. Photo: Robin Keller.

The detonation of explosives and subsequent collapse of the biomass boiler took just seconds as part of the process to dismantle the shuttered mill in Fort Frances, Ont.

But for some residents, that moment evoked the end of the former Resolute mill’s century-long history, along with the site’s uncertain future.

The boiler came down at 5 a.m. on Sept. 23 by a controlled implosion process, according to Mitch LePage, a general manager for the BMI group, which owns the property.

“The professionals that we engaged to detonate the building tied dynamite to the main columns,” he explained, adding the process was very similar to the one used to take down the co-generation building in 2021.

Ken Hawrylak was hired as one of the security guards stationed around the site to ensure the public stayed a safe distance away, but he said not many people were present.

“It was too early in the morning, everybody was asleep. It probably woke them up and scared them,” he said with a chuckle.

“It was probably as loud as when trains slam into each other, when they are picking up cars,” he added.

Hawrylak said public notice of the work had been provided.

Robin Kellar, who lives about a block away from the site, said the implosion had still made an impression.

“No matter how prepared for it, you never imagine something that loud and that earth-shaking,” she said.

Kellar shared on social media a picture she took of the biomass unit after the implosion, showing it resting on its side. A crane then took down the collapsed structure piece by piece, she said.

Kellar called it sad to see the mill, which played a major economic role in the community, disappear.

“There were cars lined up all along the parking lot watching it come down,” she said. “A lot of them were older gentlemen who probably spent their whole life working in that facility.”

She said that was their life, and now it’s gone.

The shuttering and demolition of the facility proved controversial, in part because the Ontario government had contributed almost $23 million to the 54 megawatt co-generation facility that Resolute completed in 2009.

The government later backed off of its initial position that the company would have to repay the funds after Resolute closed the facility in 2014.

Friday’s implosion is expected to be the last one required for demolition of the site.

“The rest of the dismantlement will be through conventional methods,” said LePage.

The company has a strategy for the future of the mill property that has been shared with the town, he added.

“It’s important that as a team we continue to push forward to try to create a new development in Fort Frances,” he said.

Eric Shih is a Local Journalism Initiative Reporter for the Thunder Bay Source.