Aug. 10, 2018 - Over nearly 20 years, Premium Pellet in Vanderhoof, B.C., has established itself in Canada and globally as a provider of high-grade white wood pellets for the heating market. The brand is a recognized pellet leader, competing with the likes of Pinnacle Renewable Energy and Pacific BioEnergy in northern B.C. 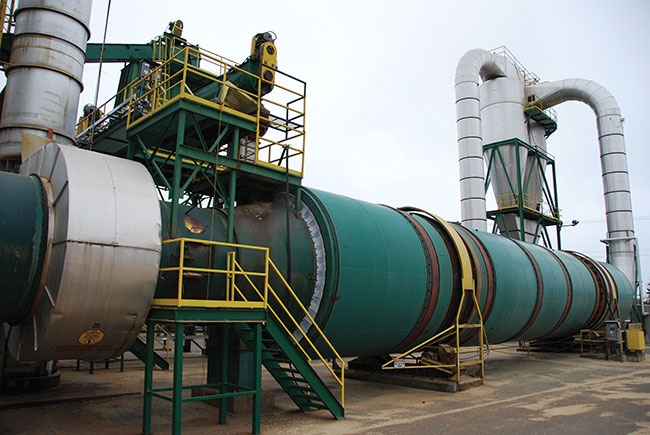 Behind the scenes, Premium Pellet operates as one cog in a well-functioning wheel of value-added production at the Nechako Lumber site on which it resides.

“Being an integrated site, we consume our own residues which provide electricity for the site and pellets for the domestic and international markets, which is good for us but ultimately it’s good for the community. This model works really well,” says Nechako site manager Dave Herzig.

Nechako Lumber was originally built in 1969 as a planer mill. A sawmill, L&M Lumber, was constructed on the same site in 1972. Premium Pellet was added in 2001, and Nechako Green Energy — an Organic Rankine cycle (ORC) Turboden generator — in 2011.

All companies operated separately until last year when Sinclar Group Forest Products out of Prince George, B.C., purchased them and merged the sawmill and planer mill under the banner of Nechako Lumber. Premium Pellet is retaining its name.

Located on a 112,000 square foot site, pneumatic conveyors connect each of the facilities and are continually transporting sawdust, shavings or hog to its respective end use. The sawmill pumps out about 245 mmbf a year, while the pellet mill produces about 165,000 tonnes, and the energy system consumes 56,000 dry tonnes of hog.

The pellet plant ingests about 185,000 oven-dried tonnes of sawdust and shavings a year. The bulk of the fibre diet is white wood from Nechako’s sawmill and planer mill, but the plant also consumes sawdust trucked in from other suppliers in the area.

“Premium Pellet has strategic partnerships with Nechako, Premium, Canfor, and Conifex,” Herzig says. “These partnerships help all of the organizations keep their transport freight costs down, and maximizes the use of residuals in the region.”

Premium Pellet exclusively produces high-grade white wood pellets for the residential heating market in Canada and globally to support the move to a more environmentally friendly fuel source. Located in northern B.C. and on a rail line, the plant is ideally situated to ship to markets in Asia.

Plant flow
Baum pneumatic conveyors spanning nearly half a kilometre bring sawdust and shavings to the pellet plant from the planer mill or sawmill, which are then stored in hoppers. A truck facility allows the plant to unload trucks full of shavings or sawdust directly into an infeed area for storage, and a separate section allows loaders to feed directly into the hoppers if needed.

For the planer shavings the production cycle begins with two Bliss 4460 hammer mills to break down the fibre, while the sawmill sawdust is treated to a MEC 56000 pounds/hr WB dryer to remove the moisture. The fibre is then stored in silos before heading down to one of five Pioneer pellet mills.

“The original build was with three pellet mills, then they added the other two over the years,” says Tammy Scott, controller for Nechako Lumber and Premium Pellet.

Pellets exit the pellet mills onto a BM&M shaker screen, and are then sent to a Bliss cooling tower before storage in a Westeel silo. “We can hold up to two days of product in the silos, and they feed directly into the rail cars,” Herzig says.

While the pellet markets are strong, Herzig says there are no current plans to expand the mill’s production. “We’re having conversations about what the future looks like in terms of expansion. How do we get bigger? Can we get bigger? Is there more fibre? And what’s the cost?” he says.

The greatest value of Premium Pellet for Nechako is its role in extracting the full value of each log that enters the site. “From log in the gate to finished goods out, we have a fully integrated site that has a sawmill and planer mill, and then I can take my residuals and create heat for the facilities on site and generate electricity to offset our Hydro cost, and then sawdust and shavings are made into pellets that are going back into communities or internationally to help move away from coal and diesel,” Herzig says. “To have that full integration on site is pretty unique.”

Nechako’s original boiler was built in 1999 — a thermal oil/wood residue boiler that replaced a beehive burner. “The original boiler was a big initiative to start using all the residuals from the bush on this site so we were leaving a better environmental footprint,” Scott says.

In 2011 Nechako Green Energy was brought online, the first system of its kind built by Turboden at a forest products facility in North America. Hog from the mill is burned in a (GTS) boiler, which is attached to an ORC or organic rankine cycle turbogenerator that uses heated thermal oil to produce electricity. The 2.2 megawatt hour produced by the ORC offsets the site’s power requirements. Heat produced by the boiler is also used in the kilns and to heat the planer mill in the winter.

Partnerships
Along with its production flexibility and value-added products, Nechako’s strength is in its partnerships, whether it’s with the community, other producers, customers or First Nations in the area. Much of the mill’s volume is purchased from upwards of 60 private contracts.

“This is something Sinclar has put a lot of effort into. Whether it’s partnership around fibre or around key customers, our goal is to continue those solid relationships,” Herzig says.

Under its new ownership group, Nechako is in a transition phase. “As part of a larger organisation we have an opportunity to ask ourselves, ‘what is that way forward and what does the future look like?’” Herzig says.

What’s not going to change is the mill’s importance to the Vanderhoof community, both as an employer and as an economic driver.

“We are just a bigger family now,” Scott says. “We have more people, more resources, more expertise brought to the table. We’re keeping the mill’s community culture as it has been, but working under the same Sinclar umbrella with the same end goal.”

VIDEO: Watch a video tour of the Nechako site at www.woodbusiness.ca/tag/video.