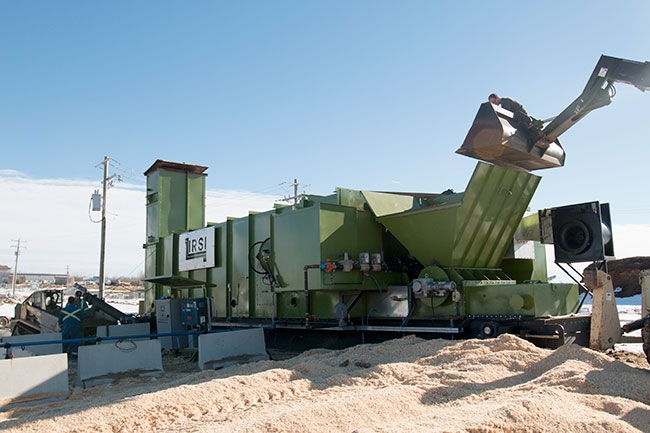 Incorporated June of 2014, IRSI is the industrial equipment designing and fabricating company started by Chris Olson and Bruce Saunders.

The pair met while attending school at the Northern Alberta Institute of Technology (NAIT), where they were part of the alternative energy (AE) program.

With diverse backgrounds, the idea of what is now known as Ulysses, came about following an eye-opening work experience where Olson was the environment manager for another Edmonton-based company.

“I realized that about 60 to 70 per cent of the waste that company was taking into the landfill was either wood waste, or mixed C&D waste, which, in most situations, is predominantly wood waste,” Olson says.

With this idea in mind, during the last semester of the AE program, Saunders and Olson began a capstone project that allowed them to evaluate the application of pyrolysis for the purpose of waste reduction.

Through the use of an existing updraft gasifier, the two students were able to test their theories, garnering positive results and eventually leading to the cornerstone of their business.

“It was pretty clear that with a well-built system that could operate fairly efficiently you could save anywhere from $300,000 to $600,000 a year in reducing fees,” Olson shares. “So that was the jumping off point for us.”

The Ulysses pyrolysis system
Through experimentation, as well as experience gained through Saunders’ previous work with similar machines, IRSI was able to simplify the pyrolysis system and address a number of the issues facing current designs.

According to Olson, a continuous feed, and a wider acceptance of feedstock characteristic is one of the things that gives Ulysses an upper hand compared to other machines that thermally treat wood waste.

“Seeing some of the issues with these other types of systems we worked that into the design of our system so that we could get a consistent end-product through the process,” he states.

Ulysses operates by using a conveyor to pull material through the system, where it is met with indirect heating from above and below creating the temperatures necessary for pyrolysis.

A draft affect pulls any syngas coming off the material through the system where it is fully combusted in the thermal oxidizer. Working in tandem with the syngas, propane burners help to produce the proper temperatures to cook materials.

According to Olson, IRSI chose to reuse rather than capture any wood vinegar or syngas because it can be used by the machine and helps to bring down the cost of running the system.

He points out, however, that these byproducts could be used in additional ways.

“One of the possible additions to our system with future iterations would be a combined heat and power option,” he explains. “Right now electrical energy generation really makes no sense in Alberta because of how cheap everything is, but like a district heating loop, if you were on a site where they had a large thermal requirement our system could combine with that and provide some heat and power there.”

With the engineered ability to run five tons of feedstock an hour, the Ulysses system burns at roughly 450C to 500C and creates an output that is essentially an 80 per cent mass reduction in waste volume.

The length of time required for the material to cycle through Ulysses depends on the moisture content of the feedstock and this information is currently being investigated by IRSI as they work with National Resources Canada (NRCan) and other partners, during their demonstration period in Drayton Valley.

Feedstock opportunities
Currently, IRSI is testing how the system works, and the quality of biochar produced, through the use of baled forestry biomass.

Simultaneously the company has also been working with Weyerhaeuser Lumber and processing planer shavings produced by the lumber mill.

“I just think the flexibility and options available for the machine is the selling point,” says Tim Keddy, a wood fibre development specialist with Canadian Wood Fibre Centre, a part of NRCan.

According to Olson, Ulysses is able to produce biochar from a wide variety of biomass, but the operating parameters and quality of the char may vary, which is why they are working in Drayton Valley to test the machine’s ability to operate with each type of feedstock.

The three main sources available in Alberta from which the pyrolysis system can produce char are:

“A lot of technologies that I’m aware of looking to specifically produce biochar do it in batch systems, so they operate a kiln or some version of that that they load up, cook their material and then empty it out, and then load up and recook again,” Olson says.

“Our system runs in a continuous fashion, so with that comes more consistency in how the end product is produced, and it gives us the ability to treat a wider variety of feedstock characteristic,” he explains. “Essentially only wood is what we would make biochar out of, but we could do it with anything under three-inch nominal sizing, so we could get right down to very finely ground up sawdust or up to three-inch chips of material.”

From waste management to biochar
Once the tests are complete and IRSI has all the information it requires to consistently produce high-quality biochar the company will become a large producer in Canada.

This is something Olson says was not necessarily expected when the company first got started as the market was not where it was today.

“We have made a fairly significant pivot in the last six months to a year and our focus as a company is now on producing biochar,” he shares, adding that waste management was a reliable focus for the company to start with because the benefits and versatility of biochar were not yet fully recognized on a commercial scale.

“All of the reports that I’ve been reading over the last six months to a year are saying that the compound annual growth rate for the biochar market is going to be anywhere from 15 to 20 per cent for the next five years,” Olson shares. “So we’re going to see a fairly significant growth in that market and that has kind of developed as we’ve gone through the process.”

Keddy says that the biomass and biochar industry has been getting a lot busier these days as governments, companies, and citizens look at things differently.

“There’s a lot of interest in this industry right now,” he says. “And as we move forward with the bioeconomy, a green economy, and a low-carbon economy so I’m sure it’s a positive for the future.”

A future of commercialization
With biochar now being the main focus of IRSI and Ulysses, Olson says the system will go through some changes as they look at downscaling due to reduced feedstock, explaining that a waste management focus didn’t always mean that the quality of the biochar was at its best.

“Realistically the process and the design of the system would stay very similar to how we have it now, just tailored a little more specifically to those wood feedstocks,” Olson says. “Whereas our initial design was to accept a wide variety of feedstock to reduce the waste rather than produce a valuable end product.”

According to Olson, some of the process changes will be small, such as air-fuel ratios, and will continue to be worked out over the next few months as the company focuses in on production in hopes of finally entering the biochar market.

“We have a few people interested in purchasing biochar from us based on meeting certain testing results, which we have met with our initial runs of the planer shavings,” he says. “So from here we want to be able to increase our throughput, if we can, and start building up an inventory, then we’ll be looking to sell that at wholesale in the biochar market hopefully here in Alberta.”

When it comes to Ulysses itself, Olson says the system will take longer to get to market as they continue to test its capabilities, and areas that need improvement.

“In terms of getting another system out and operating, within the next six months would be a good goal to at least to be getting to that area,” he says. “We’ve got a few more months running through the demonstration here and we’ll have to confirm our throughput and show that we can produce consistent reliable biochar and I think once we get to that point, in the next six month to a year, we’ll be looking at getting another system out and improving upon the things that we’ve learned with this system here.”

And these developments are what peaks the interest of NRCan researchers, who say they will continue to monitor the work being done at IRSI with Ulysses, possibly making use of it in the future.

Olson says the types of businesses interested in the Ulysses system itself are those that require or will produce a large amount of biochar and then when the time comes when IRSI is ready to begin releasing individual units they will take a hands-on approach that could be personalized for businesses.

“With the production of biochar and a reduction on what we want to run through the system, we’re now thinking that it makes a lot more sense to be a bit more involved in the actual operation of the system,” he shares. “So realistically what we could see ourselves doing is instead of an all-out sale of the system, we work with the site to set up more of a joint venture type of application.”

Learn more about the Ulysses system at www.irsi-inc.com.