Aug. 24, 2016 - Enerkem Inc., a waste-to-biofuels and chemicals producer, announced it has obtained certification from the International Sustainability and Carbon Certification (ISCC) system for the biomethanol production of its Enerkem Alberta Biofuels full-scale facility in Edmonton. This biorefinery therefore becomes the first ISCC certified plant in the world to convert municipal solid waste into biomethanol. 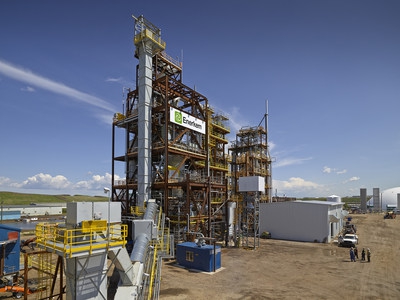 Enerkem’s facility in Edmonton becomes the first ISCC certified plant in the world to convert municipal solid waste into biomethanol.

“This reputable third-party certification confirms that Enerkem meets high ecological and social sustainability requirements. Enerkem already sells its biomethanol as a renewable chemical in North America and, with the ISCC certification, we are now adding flexibility to export it as a biofuel in Europe, said Tim Cesarek, Senior Vice President, Business Development. With the addition of a biomethanol-to-ethanol conversion module in the second half of 2016, this biorefinery will also become the first to sell multiple renewable fuel and chemical products made from waste.”

Biofuels used in Europe, such as biomethanol and ethanol, must prove, through third-party certification under an approved certification scheme such as ISCC EU, that they comply with stringent criteria in terms of greenhouse gas savings, sustainability and traceability of the entire supply chain and are compliant with the European Renewable Energy Directive (RED). Under the RED Directive, all EU countries must ensure that at least 10 per cent of their transport fuels come from renewable sources by 2020. The RED Directive also gives waste-based biofuels such as Enerkem’s methanol and ethanol the advantage to count double towards this 10 per cent requirement.

Enerkem makes biofuels and renewable chemicals from waste. With its proprietary technology, Enerkem converts non-recyclable municipal solid waste into methanol, ethanol and other widely used chemical intermediates. Headquartered in Canada, Enerkem owns a full-scale commercial facility in Alberta as well as a demonstration plant and a pilot facility in Quebec. The company is developing additional biorefineries in North America and globally, based on its modular manufacturing approach. Enerkem’s technology and facilities help diversify the energy mix and make everyday products greener while offering a sustainable alternative to landfilling and incineration. www.enerkem.com