May 9, 2017 - It’s been almost six years since the Island Lake Biomass Harvest Experiment was established in the Martel Forest region near Chapleau, Ont., and though the project is still in its early stages, researchers have begun to share some surprising findings from their ambitious harvesting experiment. 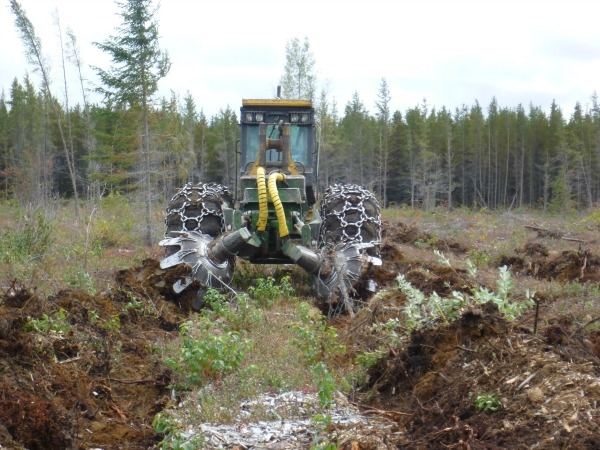 The goal of the project is to determine what effects different levels of biomass harvesting intensity might have on boreal forest biodiversity, soil properties and stand productivity, and to provide a venue where interested stakeholders can learn more about intensive biomass harvesting.

Now, nearly six years on, they have begun to share some of their early findings with the public.

Biodiversity is key
One of the most important considerations going into the Island Lake experiment is what effects more intensive biomass harvesting practices might have on future forest growth and biodiversity, since forest harvesting residues provide valuable nutrients for growing trees, as well as a wide variety of habitats and food sources for organisms that call these forests home.

And while it will be some time before researchers can definitively say what effects more intensive harvesting has on stand growth, they have nonetheless managed to generate some interesting findings on the effects this kind of harvesting has on microbial communities, which are important indicators of the nutrient processing that goes on at the site.

In all, Tembec used four increasing levels of biomass removal when initially conducting a harvest of the site in the winter of 2010-2011:

In addition, researchers have been studying three nearby “natural” forest conditions – a recently burned wildfire site, a mature fire-origin stand, and a 40-year-old second-growth forest – in an effort to compare results to reference conditions.

In terms of the harvested plots, research led by Professor Nathan Basiliko and graduate student Emily Smenderovac of Laurentian University found that, while any level of harvesting created changes in the microbial community, there were no observable differences between different levels of harvesting intensity in the first two years after harvest.

“There wasn’t any difference in terms of the intensity of harvest and its effect on the microbial community,” explains Paul Hazlett, a forest soils scientist with the Great Lakes Forestry Centre (GLFC) (a NRCan-CFS research centre in Sault Ste. Marie, and a co-leader on Lake Island research activities). “So whether we left a lot of the tree material on the site after harvesting – what we call a stem-only harvest – or we conducted a biomass harvest and removed all of the woody material to the roadside, we didn’t see any difference in the microbial community. It didn’t seem to matter how much material we removed.”

In contrast to the relative homogeny of the microbial communities observed in harvested plots, researchers found clear differences between the microbial community composition in harvested plots, the recently burned site and the uncut forest stands, indicating for this specific burned site that in the short-term harvesting has different effects than wildfire.

“The harvested sites were different from the uncut sites, and from the forest fire sites, as well,” notes Hazlett. “It is important for us to understand to what degree our harvesting practices emulate natural disturbances in these forests.”

An experiment led by Lisa Venier, a research scientist at GLFC focusing on the effect of the different harvest intensities on biodiversity in soil invertebrates yielded similar results.

“Another element that we looked at in the biodiversity realm was soil invertebrates, so beetles and spiders and other organisms that live in the forest floor. Similar to the microbial community, we did see some differences between the recently burned site and the harvested and uncut sites,” says Hazlett. “But again, the amount of biomass left on the site didn’t seem to be the important factor in terms of affecting these populations. Instead, it seems to be that the disturbance of the forest floor is important when it comes to the distribution of these organisms.”

The wonders of wood ash
One other area of the Lake Island project that has produced compelling early results is in researchers’ experiments amending soil at the site with wood ash produced from Tembec’s wood-fired thermal electricity generating facility in nearby Chapleau. Though often seen as a waste byproduct in bioenergy production, wood ash is nutrient-rich, and has the potential to enrich soil and replace nutrients removed by biomass harvesting.

“There are several reasons why someone might do this on an operational basis,” explains Hazlett. “It’s not currently being done operationally in Canada, but it is done in Scandinavia. Wood ash is high in some important plant nutrients, which you can apply back on the site to augment what you’ve removed during a biomass harvest. Wood ash also has a high pH, which can help to restore soils that have been acidified due to acid rain.”

Due to its relatively high pH, researchers have been closely monitoring any potential effects that the use of wood ash might have on biodiversity. Professor Zoë Lindo and graduate student Paul George from Western University focused in particular on nematodes, microscopic roundworms that live in the soil and are important to organic matter decomposition.

“One of the potential challenges with wood ash is the question of whether it harms site biodiversity,” says Hazlett. “You’re adding something quite different in terms of its nutrient levels, and it’s a bit caustic, because of its high pH. So far, though, what we’ve found is that there is no impact on the nematode populations.”

In addition to their work monitoring the effect that using wood ash as a soil additive might have on biodiversity, researchers have also been exploring the potential for trace metals contained in the ash to contaminate nearby water sources.

“One other thing we’ve been looking at is whether the trace metals concentrated in the wood ash—things like cadmium and chromium—might leach into the soil, and then into the surrounding groundwater and surface water. The good news at this point is that we’ve yet to see any high levels of trace metals in the soil water.”

With all their testing so far yielding positive results, Hazlett remains hopeful for a future where wood ash may be a matter of added value, rather than added cost.

“The reality is that most of the wood ash that comes from bioenergy boilers is actually landfilled” he says. “It’s an organic material with several different nutrients, and forest industry and bioenergy companies are paying to landfill this material that could actually be used as a forest soil amendment.” Hazlett and colleagues have developed AshNet, a network investigating forest soil applications of wood ash in several different ecosystems across Canada.

Time will tell
While the Island Lake Biomass Harvest Experiment is still in its early stages, there is reason for optimism based on the research team’s preliminary findings. Even as their research to this point would seem to indicate that both intensive harvesting and using wood ash as a soil additive are both potentially valuable and sustainable practices, Hazlett cautions that it will take time, and scientific rigour, before stakeholders can know with certainty whether this is the case.

“One question that we’re asking is, if we test this again in five years, or seven years, will there be differences then that we couldn’t see immediately? Will the early results carry through the stages of development as the stand grows into a mature forest? Those are important questions.”

“The true evidence of a research project like this won’t be known until 20 or 30 years after, only because it takes that long for seedlings to grow into mature trees,” he explains. “That’s when we start to see some really important differences.”

For his part, Hazlett recognizes that, so long as their efforts are generating knowledge that will allow Ontario – and Canada – to assure the future viability and sustainability of its growing renewable energy sector, the results are worth the wait.

“When we started this, part of the idea with this project was to get ahead of the curve,” he says. “Intensive biomass harvesting isn’t something that’s done to a great degree in Canadian forests, but if we continue to move toward renewable forms of energy, then burning forest biomass is a great step in that direction. We wanted to do some of these more intensive removals, and find out what effects those kinds of removal might have on the Canadian forest landscape.”

“That’s been an important goal for us, and I think we’re moving in the right direction.”