The growing biomass market in Japan is driven by an increase in the number of power plants using woody biomass, including wood pellets, wood chips and waste wood, to generate heat and electricity.

Around 18 dedicated biomass plants with a combined capacity of 282MW became operational in 2015, burning a range of woody biomass fuels. And large power producers have increasingly looked towards co-firing coal with biomass.

Pellet consumption has grown rapidly since the government’s feed-in-tariff (FIT) scheme was expanded to include biomass and other renewables in July 2012. Japan has diversified its power mix since the suspension of the country’s nuclear generation following the Fukushima disaster in 2011. And it has set ambitious emissions reduction targets. Under the FIT scheme, generators receive ¥17-32/kWh (14¢-27¢/kWh) depending on the wood source they use.

Canada remains Japan’s biggest source of imports, supplying 146,000 tonnes last year, up by 61 per cent from 91,000t in 2014, and accounting for 63 per cent of total wood pellet imports. Canadian producers have become increasingly active in the growing Japanese market as they struggle to compete in South Korea with cheaper Vietnamese supply.

Japanese buyers have stricter criteria for pellet sustainability and quality than their South Korean counterparts, and are concerned with reliability of supply. Japan’s willingness to sign long-term contracts makes it a more attractive market for producers that are able to guarantee supply quality and stability, a benefit to Canadian exporters.

China accounted for 25 per cent of Japan’s pellet imports in 2015, supplying 58,000 tonnes. China had not shipped wood pellets to Japan since a 5,000-tonne cargo in September 2013. Utility Soma Kyodo Power began receiving 5,000 tonnes/month from China in February for co-firing in its 2,000MW Shinchi coal-fired power plant in Fukushima.

Vietnam accounted for 12 per cent of Japan’s wood pellet imports, or 27,500 tonnes in 2015, up from just 2,000t a year earlier. Although Vietnamese pellets are very price competitive, Japanese buyers require forest management certificates for imports, which not all Vietnamese producers can provide.

But wood pellet deliveries are still some way behind Japan’s imports of palm kernel shell (PKS). Japan imported 456,000 tonnes of PKS last year, up by 87 per cent from 244,000 tonnes in 2014 — supplied entirely by Indonesia and Malaysia. Further demand growth is expected as new capacity comes on line, market participants said.

Rising Japanese demand for wood pellets and other woody biomass is also expected in the coming years. A further 585MW of dedicated biomass-fired generation capacity should come on line in 2016-17. 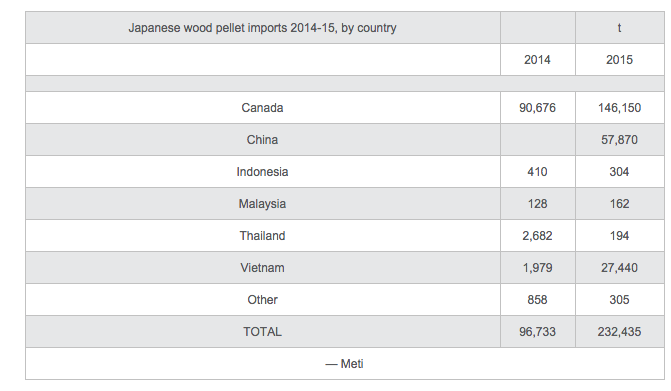