Dec. 7, 2018 – Forge Hydrocarbons Corp. has received a $4 million USD investment from Lockheed Martin under the Industrial and Technological Benefits (ITB) Policy. This investment enables Forge, a Canadian small and medium-sized enterprise (SME) company, to further the development of its Lipid-to-Hydrocarbon (LTH) technology and to construct a first-of-its-kind commercial plant with a production capacity of approximately 19 million litres per year (ML/y). 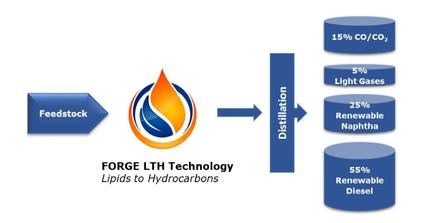 Lockheed Martin’s investment is in direct support of its ITB obligations associated with Canada’s purchase of 17 CC-130J Super Hercules aircraft, which were delivered to the Royal Canadian Air Force in 2010. Lockheed Martin also delivers continued In-Service Support for the CC-130J fleet.

The LTH process emerged from decades of high temperature chemistry research and was invented by Dr. David Bressler, a professor in the Faculty of Agricultural, Life & Environmental Sciences at the University of Alberta in Edmonton, Alta. Early research and the construction of the first pilot facility was supported through grants from the Natural Sciences and Engineering Research Council of Canada, the Province of Alberta, MITACS and Alberta Innovates, as well as large investments by the Alberta Livestock and Meat Agency and Western Economic Diversification Canada. The Sombra LTH Facility is being supported by a $4.2 million contribution by Sustainable Development Technology Canada.

“Forge is extraordinarily pleased to have this investment from Lockheed Martin under the ITB Framework. Lockheed Martin’s investment not only adds to the validation received to date for the LTH technology but also provides a necessary monetary boost to Forge’s commercialization pathway,” said Forge CEO Tim Haig. Thanks to Lockheed Martin’s investment, Forge has begun final engineering design and site preparation for the first LTH plant to be built in Sombra, Ont. Forge expects to break ground on this first LTH plant in 2018. This project funding will also contribute to the continuation of research and development at the University of Alberta and Forge’s pilot facility in Edmonton, Alta., to increase the efficiency of the technology and to broaden the scope of the application to a wider range of feed stocks that can be transformed into a broader range of renewable fuels.

“We are very pleased to see our Investment Framework grant going to such a highly innovative SME like Forge,” said Charles Bouchard, CEO of Lockheed Martin Canada. “We are impressed with Forge and its contributions to providing this advanced, renewable fuel technology to the global community. The success of this investment is an example of how large international aerospace companies such as Lockheed Martin can collaborate with smaller businesses in Canada to create opportunities for lasting growth in the Canadian economy.”