March 2, 2018 - L’Oréal USA has announced plans to achieve carbon neutrality in 2019 for all 21 of its U.S. manufacturing and distribution facilities with a financially sustainable approach that could potentially serve as a model to support new renewable natural gas (RNG) projects in the future. 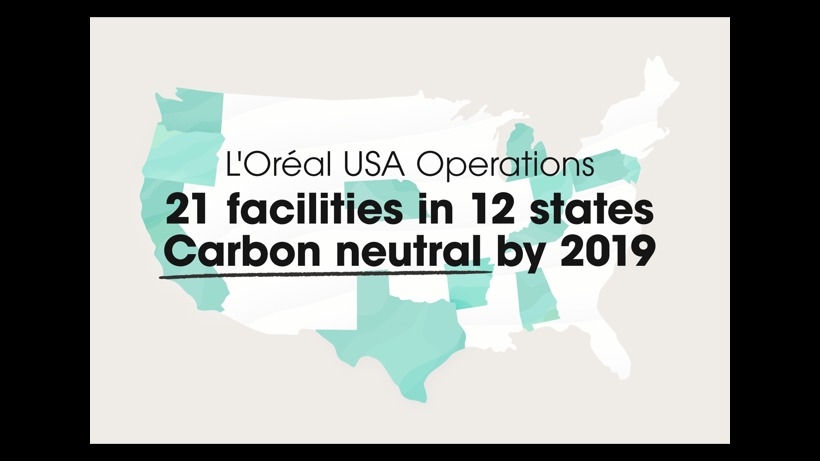 In order to reach this milestone, L’Oréal USA is adding to its diversified energy portfolio with RNG purchased from a new processing facility in Kentucky. The company currently has 17 renewable energy installations across the country, including large on-site solar arrays in Arkansas, New Jersey and Kentucky as well as wind turbines in Texas. The RNG purchased from the new project alone is expected to eliminate the carbon equivalent of 1.8 million gallons of gasoline consumed per year.

“Achieving carbon neutrality for all of our Operations facilities furthers our commitment to being a sustainability leader in the United States,” said Frédéric Rozé, president and CEO of L’Oréal USA. “We have seen that a dedication to sustainability fosters innovation, inspires creativity and builds a strong team spirit. This new milestone can be credited to our passionate teams and their vision in finding a new renewable energy approach that benefits one of our local communities while being a long-term, financially viable solution.

Guided by L’Oréal’s Sharing Beauty with All global sustainability program, L’Oréal USA had already surpassed the company’s 60 per cent carbon emissions reduction goal in absolute terms in 2017, reaching an 84 per cent reduction from a 2005 baseline and achieving 100 per cent renewable electricity use for all 21 U.S. manufacturing and distribution facilities.

After an 18-month research phase, the team identified a potential renewable energy production solution utilizing landfill gas (LFG) from the Big Run Landfill in Ashland, Kentucky, which is 135 miles from the L’Oréal USA plant in Florence, Kentucky. At the Center for Climate and Energy Solutions (C2ES) Climate Leadership Conference in Denver today, L’Oréal USA announced that it has signed a 15-year agreement to purchase approximately 40 percent of the RNG produced from the Big Run Landfill. The RNG L’Oréal USA purchases will be directed into the interstate natural gas transmission system. L’Oréal USA’s long-term purchase commitment of the RNG was a key underwriting component that led to the financing of the project.

This spring, Ultra Capital-owned Big Run Power Producers will break ground on a new processing facility that will process the LFG from the landfill and condition it for use as pipeline quality RNG. Instead of flaring and destroying the LFG, it will be cleaned for use as RNG. Construction of the processing plant will begin in March 2018 and is expected to be completed by the end of the year. The project will generate 7-10 permanent jobs at the facility and utilize roughly 100 construction jobs during the buildout.

“This accomplishment would not have been possible without our team’s determination to tackle the carbon emissions from our own heating systems, a difficult challenge shared across industries,” said Jay Harf, Vice President of Environment, Health, Safety and Sustainability for L’Oréal Operations Americas. “We are proud to have found a local solution and approach with the potential to be replicated at landfills across the country.”

While the Big Run Landfill project satisfied L’Oréal USA’s key principles of being local and providing a new renewable energy source, the project also needed to be financially sustainable for the company. High production costs and demand for RNG drive the market cost up significantly – up to eight times the cost of non-renewable natural gas. In order to offset the cost differential between RNG and non-renewable natural gas, L’Oréal USA will sell its environmental attributes into the transportation fuels market for approximately five years, which will help fuel producers to comply with the EPA’s Renewable Fuel Standard. During this time, the company plans to purchase carbon offsets from an EPA award-winning RNG site. After approximately five years, L’Oréal USA plans to use the environmental attributes to maintain its carbon neutrality for all 21 of its manufacturing and distribution facilities.

This use of directed biogas after the initial five-year period is unique in its approach and scale. LFG has traditionally been used to generate electricity or for direct use at a single site. Today, the highest value use for RNG is in the transportation fuels sector. L’Oréal USA’s approach enables the company to purchase enough RNG to achieve carbon neutrality for all 21 of its manufacturing and distribution facilities, spread across twelve states, with a single solution. Given the number of landfills in the U.S. that have the potential to convert LFG to RNG, L’Oréal USA’s approach could potentially serve as a model to support new renewable natural gas projects in a way that is both environmentally and financially sustainable.