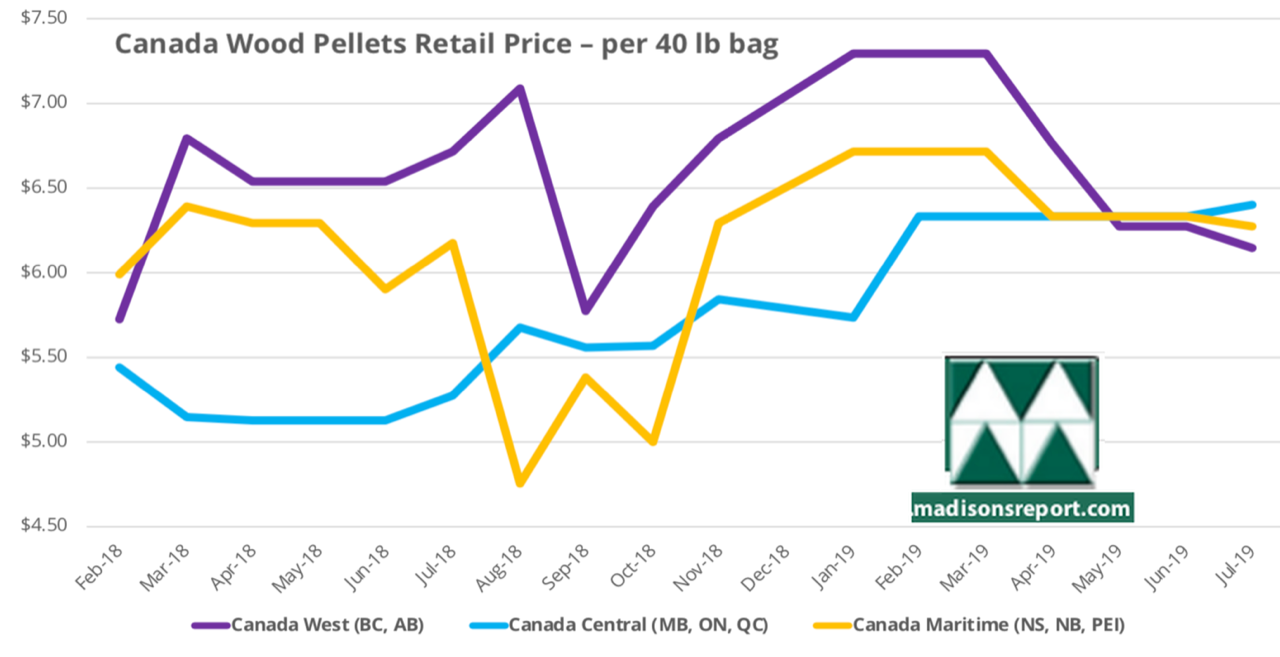 Follow-through from unstoppable demand for solid wood products at the end of 2017 lead to robust lumber sales through last year, with prices rising accordingly. At sawmills across Canada and the U.S., hungry sawblades consumed robust amounts of logs, providing good volumes of chips and sawdust as feedstock for wood pellet producers. By the end of 2018 shocked customers decided to hold off any extra lumber purchases until absolutely necessary, in the hopes that prices would drop.

Forest operators are adjusting to the changing demands of primary sawmills. When lumber demand is soft and falling lumber prices lead to lowered production levels, timber harvesting activity in the forest slows by a similar ratio. This reduces the volume of forest residuals, which pellet manufacturers in many jurisdictions use as feedstock together with the usual kiln-dried sawmill residue. – Madison’s Wood Pellet Report

A recent report from the United Kingdom’s Department for Business, Energy and Industrial Strategy (BEIS) showed that 35.8 per cent of electricity used in 1Q 2019 was generated using renewable sources, up from 30.5 per cent over the same period in 2018. Total electrical energy generated by renewables reached 31.1 terawatt hours (TWh) in the first quarter of this year, amounting to an increase of +9.2 per cent over 1Q 2018.

The proportion of electricity generated by renewable sources in the UK has been steadily increasing over the past few years, and the trend appears to be continuing in 2019. Bioenergy – which includes biomass – generated 8.76 TWh in the first quarter, up +13.3 per cent from 1Q 2018. Bioenergy also accounted for 28.2 per cent of total electricity generated by all renewables, well ahead of hydro and solar and second only to onshore wind.

* Be ahead of these data releases … Don’t delay, this month’s North America Madison’s Heating Wood Pellet Report market update has been emailed to subscribers.

At least 11 million people globally were employed directly or indirectly by the renewable sector in 2018, with solar photovoltaics, bioenergy, hydro, and wind power being the largest employers, said the sixth edition of the International Renewable Energy Association’s (IRENA) Renewable Energy and Jobs Report.

The other key takeaways: