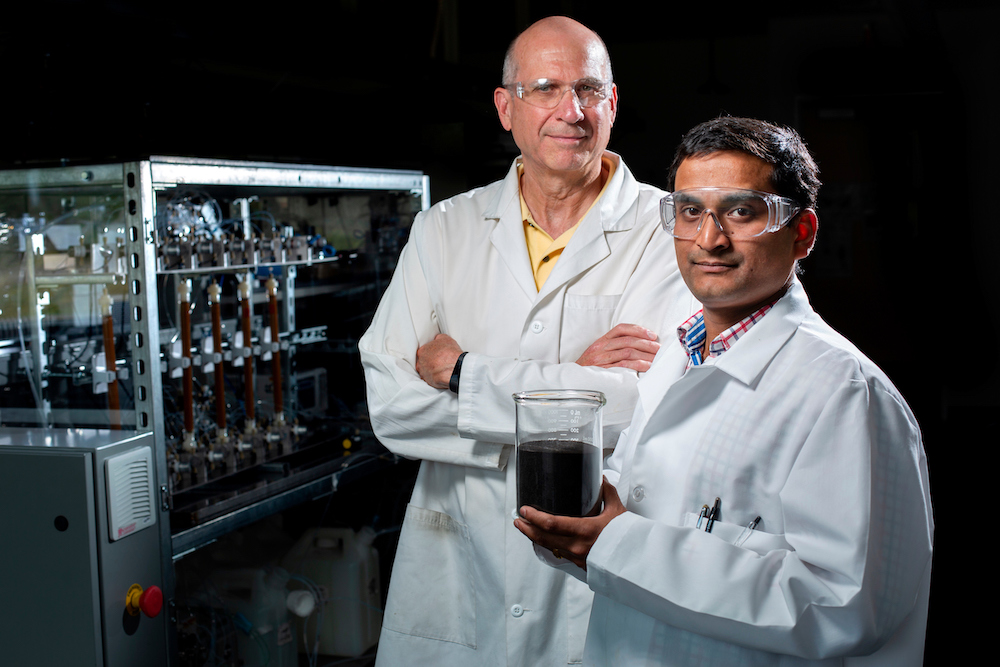 Robert C. Brown, left, and scientist Santanu Bakshi of the Bioeconomy Institute, are working to add value to the biochar (charcoal) that’s also produced when pyrolysis is used to convert corn leaves and stalks into a bio-oil. The biochar could be an excellent way to slowly release phosphates and nitrates – a good way to feed plants while keeping the nutrients out of water. (Christopher Gannon/Iowa State University)

Researchers at Iowa State University are using treated biochar to absorb nutrients from liquid manure and repackage them as slow-release fertilizer pellets.

“Our concept starts from there – can we capture nitrogen and phosphorus and transfer these in a solid form so farmers can easily apply it?” says Santanu Bakshi, an environmental research scientist and biochar expert at the ISU Bioeconomy Institute.

Researchers have long understood that the use of biochar – obtained from burning biomass in a process called pyrolysis – replenishes soil carbon. That has the added benefit of increasing crop yields while decreasing needed fertilizer volume, along with reducing greenhouse gas emissions by sequestering carbon dioxide in the ground.

“And not only trap it,” says Bakshi. “When we tried to release the phosphorus from the system, we noticed that this is a very slow process.”

The team had hit upon a potentially novel use for biochar as a slow-release crop fertilizer.

“We’ve been looking at biochar as a byproduct [of pyrolysis] for many years, but we didn’t get a lot of interest from the U.S. Department of Energy,” says Robert C. Brown, director of Iowa State’s Bioeconomy Institute and principal investigator of the biochar research project.

Pyrolysis is traditionally an oxygen-free process. Brown’s innovation was to add a tiny amount of air to encourage combustion of the biomass and generate heat in the reactor, which speeds up the conversion of biomass to bio-oil and biochar while also producing sugars.

Brown says there was already governmental and corporate interest in bio-oil as a diesel substitute and a greener component of asphalt. Using iron-rich biochar to extract nutrients from raw manure adds even more value to the pyrolysis process, since where once biochar was almost an afterthought to the bio-oils, the carbon-rich powder now has added value in its own right.

The team is working to eliminate the “competition” posed by other nutrients in swine manure and isolate phosphorus in a biochar-based bioreactor system. Adding zeolite – a common, inexpensive, clay-like mineral – to the manure in a separate process traps the nitrogen. Finally, the nutrient-rich biochar and zeolite would be processed into solid, slow-release fertilizer pellets. 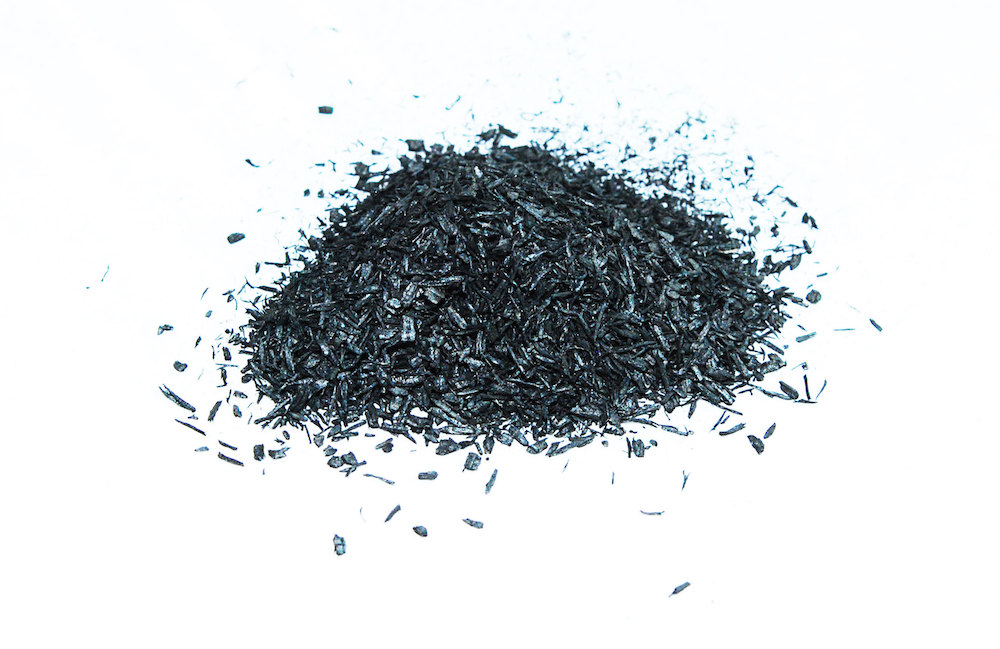 Biochar has been used in rainforests for thousands of years, but its use in modern agriculture is ever-expanding. Photo courtesy Iowa State University.

Iowa State’s research into biochar could have many benefits for farmers and the environment alike.

Better nutrient management improves water quality by reducing runoff and the need to ship and store large quantities of manure. That lowers gaseous emissions from manure pits and air pollution from transport vehicles.

It can appear counter-intuitive, says Brown, that a process involving heat is a net gain for the environment, but the charcoal produced through pyrolysis sequesters the carbon dioxide in the biomass and keeps it from entering the atmosphere had the organic material been open-air burned or left to decompose.

Biomass contains about 30 per cent carbon, while in biochar, carbon is concentrated to between 55 and 70 per cent, Bakshi says. “So you are adding carbon to the soil, which is another way to say that you are removing carbon dioxide from the atmosphere,” he says.

Farmers are not financially compensated for having greener operations, and Brown notes there are currently no regulations in the United States preventing farmers from “draining nitrate and phosphate into the rivers and lakes.”

“But [farmers] have an economic incentive to keep those nutrients on the field as a productive unit,” he says. “If they can be retained as a slow-release fertilizer, that’s very attractive to them.”

Along with being more environmentally friendly than raw manure, the fertilizer pellets are easier for farmers to apply. They would be plowed into the topsoil, allowing for a slow, uniform release of the nutrients they contain. Better still for farmers, switching from liquid manure to pellets will save money and improve nutrient efficiency, as they can use less fertilizer without seeing any reduction in their crop yields.

“You are reducing the amount of nitrogen and phosphorus and you are getting the same yield, or even more,” Bakshi says, adding that over the long term, restoring carbon levels makes for healthier and more productive soil.

Getting buy-in across the industry might take time, but Bakshi says farmers are getting wise to the potential benefits of biochar.

“Farmers are showing interest. They have started thinking [about how] to reduce tons and tons of inorganic fertilizer,” he says. “We’re improving water quality, we’re reducing greenhouse gases, we are reducing transportation problems of voluminous manure, and we are improving the economics [of manure].”

Biochar is also getting attention north of the border. In a March 2022 report for Agriculture and Agri-Food Canada, soil scientist Vicky Lévesque says adding carbon compounds to soil “can have a positive effect on Canadian soil health and productivity and help to reduce greenhouse gas emissions.”

Biochar, Lévesque pointed out, is not a new concept. People living in the Amazonian rainforest thousands of years ago added carbon – in the form of charcoal from cooking fires mixed with manure, animal bones and broken pottery – to produce “exceptionally fertile soil.”

Turning maple bark, pine chips and other organic residue into a carbon-rich soil additive has helped regenerate soil and boost productivity in warmer climates, and Lévesque’s research is focused on applying that same technique in higher latitudes. She used biochar while growing sweet peppers and greenhouse tomatoes in soils typical of northern farms. The results were impressive, with biochar increasing the size and volume of the vegetables and adding beneficial bacteria to the soil, while also cutting fertilizer use by up to half the recommended application and reducing nutrient runoff.

“All of that is good news for farmers and the environment,” the report read. “Significantly, the use of biochar could also provide an opportunity to help agriculture lands better recover from extreme weather events linked to climate change, and support food security.”

Working out the details

Brown hopes having a practical use for biochar in agriculture will make farmers more enthusiastic about pyrolysis as a whole, thus expanding the use of the green technology. “We now can improve the economic prospects of pyrolysis by using it as a way to actually remove carbon from the atmosphere and sequester it for potentially thousands of years,” he says.

Logistical questions remain. While Brown says it would not be practical for each farm to house its own pyrolysis system since there is no economy of scale, neither does he think it makes much sense to ship biomass over long distances to centralized biorefineries. He advocates for a solution where farmers or subcontractors would only have to move biomass “a very short distance” to regional hubs where “small, modular reactors” have been assembled onsite.

“We think the answer is not an on-farm system, not one gigantic centralized system, but a system that’s just right,” says Brown. “Instead of trying to pull biomass from hundreds of miles, let’s look at something that’s more on the scale of a county. That notion is it doesn’t sit on a single farm. It’s actually more like a co-operative enterprise, like you see in some of the grain elevators.”

Farmers could be paid in cash for the biomass they provide or receive biochar for their later use on the farm, he mused.

Down the road, Bakshi envisions an automated bioreactor system that would move manure through biochar and zeolite chambers where nutrients are separated, captured and processed. “I’m very confident that we will be successful,” he says. “If it works on a small scale, we can obviously increase the scale.”

Another challenge researchers must confront is the cost of biochar, which at present is highly prized by home gardeners. “You can sell it on eBay for $1,000 a ton, and that’s because consumers get a little bucket of it to put in all their pots or their plants in the house,” says Brown. But at that price, he added, “it’s not going to work scaling it to conventional agriculture.”

Brown suspects farmers could be swayed by biochar’s ability to build soil carbon and reduce nutrient runoff if it sold in the $100-per-ton range. “It may be significantly less than that,” he says. “We still need to have a business model that is not based solely on selling biochar.”

In tandem with the university’s work on biochar, Iowa State has ongoing research focused on finding markets for the other main pyrolysis byproducts – bio-oils and sugars – to make the entire process more economically feasible.

Lévesque also identified cost as a potential limitation for biochar’s wider agricultural use. “The current high cost for farmers to purchase biochar might make it more suited for high-cost value crops, such as orchards and vineyards,” she says.

However, Agriculture and Agri-Food Canada predicts Canada is poised to expand well beyond the 50 or so biochar producers currently active in the country, and it is hoped the added volume could lower costs. “It might take some time before we see the profound effect that biochar could have for Canadian farmers and the environment, but the future is burning bright,” the AAFC report says.

Armed with a $1-million USDA grant, the next step for Brown’s team is to dramatically scale up biochar production and take the research out of the laboratory and into a small-scale industrial biochar system during a three-year pyrolysis “demonstration project.”

The project has an influential backer. Iowa businessman Harry Stine, founder and owner of Stine Seed Co., is financing the construction of an industrial autothermal pyrolyzer near Des Moines that can process 50 tons of biomass per day, producing roughly 10 tons of biochar.

For comparison, Iowa State’s pyrolysis pilot plant can process about half a ton of biomass daily.

The more complex field environment will bring new challenges, but once researchers demonstrate how a commercialized pyrolysis system can work at the volume needed by industry, Brown is confident buy-in will come from farmers who recognize the potential value of biochar to their operations.

“That also is key, to show we have the capacity to produce the biochar that would be used,” Brown says. “The pre-treatment is straightforward, the post-treatments are straightforward. It’s a matter of being able to say somebody can afford to build one of these pyrolyzers and generate at scale.”

Related
B.C. wood pellets a hit in Europe, but not Alberta
Quebec pyrolysis plant to produce bio-coal products
Biochar: growing a sustainable medium for horticulture
How to profitably create carbon-negative energy from biomass