Aug. 3, 2016 - Martin Engineering has introduced a technology that uses the kinetic energy from a moving conveyor belt to generate enough power to run a wide variety of electronic systems. The Martin Roll Gen System is a self-contained mini power station that allows operators to run electrical monitoring systems and safety mechanisms. Able to be retrofitted on existing idler support structures, operators are not required to maintain a special stock of conveyor rollers, as the generator can be employed on virtually any steel roller. The device is considered a first step toward eliminating power production obstacles, as conveyors move into the next generation of “smart systems” that are predicted to be more sustainable and autonomous. 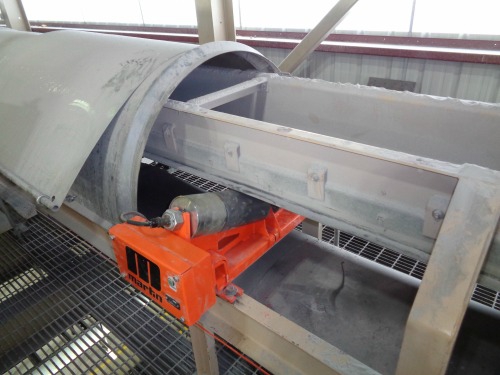 Running auxiliary power can be both complicated and costly, requiring expensive labor and oversized cables to accommodate the inevitable voltage drop over long runs, as well as transformers, conduit, junction boxes and other components. Using even a small conventional generator to provide power introduces a different set of issues, including flammable fuels. In many operations, this lack of available power means that any monitoring of the conveyor must be done by technicians physically walking the length of the structure, which can be a difficult and time-consuming task when the systems are long and span difficult terrain.

A more efficient approach is to employ sensors to transmit important data from remote points to a central location where it can be monitored in real time and recorded for later analysis. But intelligent monitoring systems for any conveyor system require power for extended operation. Due to the distances involved, cabled communication systems are not ideal, and therefore wireless communication systems are more advantageous. Options such as solar power are not well suited to the general conditions of a conveyor system, as monitoring devices are often required in an enclosed structure without access to sunlight, or for continuous operation during both day and night.

“We found that we could draw energy from a moving belt by attaching an independent generator directly to one of the rollers,” said Paul Harrison, Global Engineering Manager. “This way, the conveyor could produce power without altering the structure of the system or affecting its physical configuration.”

Being able to add a generator to a roller delivers the benefit of utilizing the proven reliability of existing roller designs, while drawing power from the belt for a wide variety of electronic devices. Product engineers developed a design to accomplish this through the use of a magnetic coupling that attaches to the end of an existing roller. The outside diameter of the generator matches the diameter of the roll, but places the generator outside the material path to avoid the heavy loads and fugitive material that tends to damage existing design attempts. The roll generator is held in a fixed position by the roll support system, but is not normally required to bear any of the material load.

In the new, patent-pending design, a “drive dog” is attached to the end face of the roll that is resting on the generator, using magnets. The drive dog engages the generator through the outer housing’s machined drive tabs. The magnetic attachment ensures that electrical or mechanical overload does not force the roll to stop; instead the magnets will slip on the roll face.

The conveyor roll loads are carried by the large support shaft in the generator, which does not rotate and is rigidly mounted to the idler support structure. The generator forms a lightweight driven unit that does not affect the existing roll in any way, except to be rotationally engaged via the magnets, and so draw a small amount of mechanical

power in order to generate the electrical energy. The generator is sealed from fugitive material and forms an integral unit independent of the conveyor roll. The bearings of the generator are able to handle the conveyor belt load, as they are of similar size to the roller.

On conveyors that already employ Martin Trac-Mount Idlers outside of a loading zone, installation is as easy as removing the wing slide on one end and replacing it with the Roll Generator slide, a two-minute procedure. The TMI design is particularly well-suited to tight spaces, with just 8 inches (203 mm) of clearance needed for 6-inch (152-mm) rolls. While standard rollers can be difficult to replace without ample clearance, the slide-in/slide-out roller frames allow quick service, without the need to raise the belt or remove adjacent idlers.

“The generator can also be installed on its own mount or on other existing support structures, such as a belt tracker,” added Harrison. “All components to ‘condition’ the power to a steady 24VDC are enclosed in a protective cabinet, typically mounted directly on the idler support slide.”

The reliable power supply helps bring a new level of sophistication to conveyors, allowing designers to equip their systems with devices such as weigh scales, proximity switches, moisture sensors, pressure switches, solenoids and relays, as well as timers, lights and even additional safety mechanisms. Wireless communication can be used to transmit directly to a central controller, giving operators a cost-effective way to access data that has not been readily available in the past — and taking another step toward “smarter” conveyor systems.

“The capability to store power in a small battery bank is already in development,” Harrison added. “This will allow the generator to produce 5-10x higher amperage for short periods to power higher-wattage devices.”

Martin Engineering, based in Neponset, Ill., develops and manufactures flow aids and conveyor products around the world for a wide variety of bulk material applications, including coal, cement/clinker, rock/aggregate, biomass, grain, pharmaceuticals, food and other materials. The firm offers manufacturing, sales and service from factory-owned business units in the U.S., Brazil, China, France, Germany, Indonesia, Mexico, South Africa, Turkey, India and the UK, and under exclusive license with ESS Australia. For more information, visit www.martin-eng.com