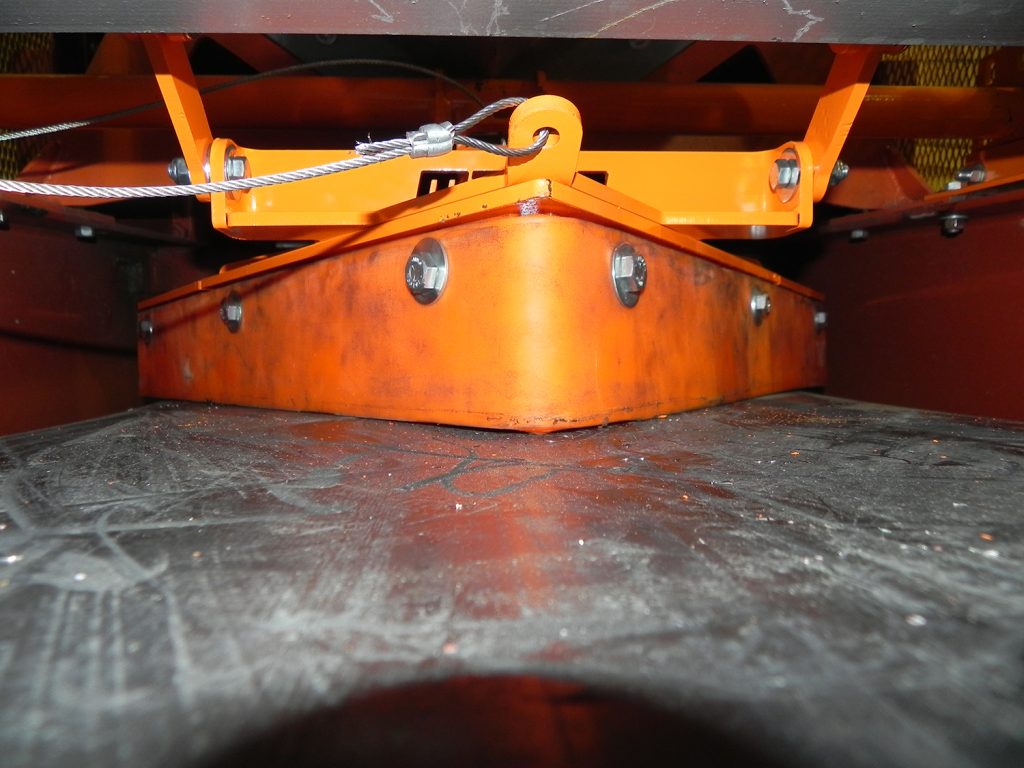 Martin Engineering, a global leader in bulk handling conveyor accessories, has redesigned one of its most popular tail protection devices to be a lighter weight, modular unit delivered in a compact package for improved safety and convenience. The re-engineered Martin V-Plow HD achieves the gains with no compromise in performance. “The heaviest section of the previous design was about 21 pounds, while the new modular unit’s heaviest component is just 13 pounds, a reduction of about 48 per cent,” explained conveyor products manager Dave Mueller. While the previous welded design’s largest dimensions were 17.5 wide x 38 inches long, the new modular design’s widest component is less than eight inches and the longest is approximately 31 inches.

“The result is a package that fits most local delivery trucks and can be easily carried by workers to sites that may have accessibility issues, with the components assembled as they are installed to reduce the risk of injury,” Mueller said.

“Tail pulley protection is essential to efficient conveyor operation, but because of their size, the components can be cumbersome to ship and install,” he continued. “In most designs, the wide V-shaped unit is typically delivered with mounting equipment in a large box that can pose a logistical problem to both air and ground transport, due to the weight and size. This can lead to frustrating delays during tight installation schedules.”

Mueller further pointed out that, once the previous design was delivered, getting it to the installation point could be a challenge with potential safety issues. Often workers needed to carry the oddly-shaped box by hand up several flights of stairs, through corridors, or to areas with limited accessibility. According to OSHA (U.S. Occupational Safety and Health Administration), workplace injuries caused by lifting, carrying and falling/dropped debris are among the most prevalent.

The Martin V-Plow HD prevents tail pulleys from becoming fouled and damaged by spillage traveling on the return side of the conveyor belt. Fugitive material commonly migrates from the cargo side to the return side during normal operation. If this spillage reaches the tail pulley, two things can happen. One is lumps getting caught between the pulley and the belt, gouging and damaging both the belt and pulley face. The other is spillage being crushed by the pressure between the pulley and the belt, adhering to the pulley face and the return side of the belt, causing pulley slippage and fouling of idlers along the system.

Engineered for belts as wide as 120 inches with speeds up to 900 feet per minute, the Martin V-Plow HD redesign has made the equipment modular, segmented into a few pieces that are arranged in a box that fits almost any form of delivery transport. This also makes the equipment easier and safer to carry to the installation area.

With easy-to-understand instructions for the tongue and groove assembly, the rugged painted steel parts can be snapped and securely bolted together in minutes, creating a strong structure. The time saved on delivery to the facility and the work area more than makes up for the few minutes of assembly time.

Mounted to hanger bars by clamps or welding, the unit glides on the return side of the conveyor belt using hinge system, deflecting any fugitive debris off of the belt. The assembly holds an easily replaceable four inches wide, one-inch-thick blade, which provides two inches of wear life. Blades are available in 60 Shore A durometer nitrile rubber or long-wearing 90 Shore A durometer urethane and can be ordered with specialized blades that are chemical resistant or designed for high temperature applications.

The Martin V-Plow HD mounting system and security cable assembly is safer, longer-lasting and less damaging to the belt than competing units. The return side of conveyor belts is generally more prone to damage and wear than the cargo side. Most plows on the market are attached to the stringer by a chain and ride the return side of the belt using the weight of the unit to apply pressure. Beyond severe bounce and instability issues, which can allow debris to pass, the chain acts as both the mounting and the safety system. If the chain breaks, the unit will detach and rattle indiscriminately, damaging the belt and potentially injuring workers. If the Martin V-Plow HD detaches from one mount, the other mount and safety cables keep it in place, protecting the belt and workers until the system can be stopped and the unit can be repaired.

“What makes the Martin VPlow H-D a popular choice is the safety and performance, but the ease of installation and maintenance are an added benefit,” Mueller concluded. “I think one of the traits operators are most surprised by is how competitively priced they are, which further improves the return on investment.”