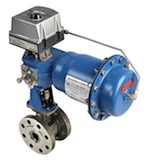 October 10, 2012, Norcross, GA – High efficiency of the production and operational reliability are the key performance indicators for an innovative plant that will be equipped with Metso's valve and field instrument solutions.

Metso has received an order to supply valves and smart instrumentation for the innovative GoBiGas project in the Rya harbor, Gothenburg, Sweden. GoBiGas is a major project for Göteborg Energi AB that is starting a biomass gasification plant. The plant is currently being built by Metso Power and is the first of its kind in the world. The plant converts biomass into renewable biomethane gas, using the existing natural gas grid for distribution.

Metso has been selected to supply the state-of-the-art control and on-off valves together with intelligent and safety valve controllers for both the Gasification and the Methanation part of the GoBiGas project, phase one, to help the plant maximize process reliability at all times. The Metso offer was selected in a procedure following the Public Procurement Act, fulfilling all the technical and environmental requirements accordingly.

Reliable valve performance in demanding conditions is the key to ensuring safety, flow control accuracy, and reliability together with reduced process variability, which are key challenges in the gasification process. With the intelligent valve controllers featuring performance diagnostics and the safety valve controllers providing extensive safety valve testing and improved diagnostics data, predictive maintenance is possible, thus resulting in improved plant safety and minimizing the operational and maintenance costs of the valves.

GoBiGas focuses on producing biomethane through gasification of biofuels and forest residues. The gasification system, together with the subsequent methanation and gas up-grading system, will produce high-calorific gas, biomethane, for distribution in the existing gas grid. This is the first plant of that kind ever and gas of this quality has never been produced continuously before from gasification.

The GoBiGas gasification plant will be built in two phases, the first being scheduled to be operational late 2013, and the second phase to be accomplished after the first phase has been evaluated.