June 16, 2015 - Depending on how many years separate you from your last chemistry class, you may or may not remember the definition of a catalyst: a compound that facilitates a chemical reaction without being consumed by the reaction. Many reactions can’t happen efficiently – or at all – without catalysts. 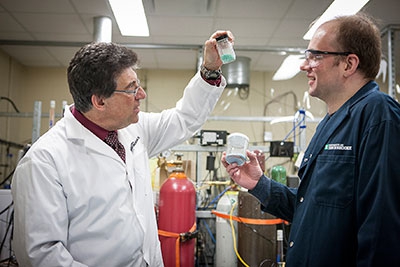 One such reaction is the conversion of hydrocarbons, such as the methane found in natural gas, to hydrogen and “syngas,” a gaseous mixture used to produce liquid biofuels. The catalysts typically used for this conversion process have two strikes against them: they’re quite costly, and they get deactivated during the chemical reaction. This means “you have to continually supply more catalyst to keep the reaction going, which further increases the cost,” says Nicolas Abatzoglou, director of chemical engineering and biotechnology at the University of Sherbrooke. In business terms, this means less efficient production.

For the past several years, Abatzoglou, who also serves as BioFuelNet’s Conversion Theme Leader, has been working to make the conversion reaction, called “reforming of natural gas,” more efficient and thus commercially viable.

At the heart of his mission: creating a better catalyst. After the requisite trial and error at the lab bench, he and his research team hit pay dirt in 2010, with a “more robust and resistant compound than the products used in the industry,” he says. When he compared his new catalyst to commercially available alternatives, he found it not only increased yields but stayed active for longer periods of time. That’s because his catalyst is much more resistant to “catalytic fouling,” a process that gradually degrades the compound. As Abatzoglou explains, a longer-lasting catalyst has the two-pronged benefit of saving costs and sparing the environment from the impact of discarding fouled catalyst. The US patent for his creation came through in 2012.

With the basic research behind them, the researchers set out to test the new catalyst on a wider scale. They found the perfect testing ground in Enerkem Inc., a green chemical company that uses advanced gasification technology to convert a variety of feedstocks into biofuels and other chemicals.

Enerkem’s laboratory in Edmonton, the company’s first full-scale commercial “waste-to-alcohols” facility, is in the midst of testing the novel catalyst, and results to date do not disappoint. “The catalyst did just as well at the Enerken laboratory facilities as it did in our lab,” Abatzoglou says, adding that “we’ve now established, in our own laboratories, the high yield and stability of the catalyst for over 500 hours of operation within a range of conditions which result in no coke formation”

Although Abatzoglou has no plans to market the product himself – as a researcher, he finds his greatest comfort zone in the process lab and in technology transfer – he says that BioFuelNet could play an important role in bringing his work to industry’s attention. “Any company that makes biofuel is a potential client, as well as companies producing hydrogen,” he says. Given that more than 80 per cent of hydrogen production worldwide comes from natural gas, the catalyst’s use can extend to this sector.

If his catalyst yields its chemical secrets

Better yet, “the added efficiency of our catalyst could make it commercially viable to produce hydrogen and syngas not just from natural gas, but from almost any methane-rich gas,” Abatzoglou says. He includes biogases produced by anaerobic fermentation, such as landfill gas, in this category. “Methane-rich gases can often be environmental nuisances, and finding ways to transform them into useful fuels and products is a very important research priority right now,” he notes.

If the cost of using biogas as a “starter” becomes comparable with the cost of starting from fossil fuels, the possibilities for green biofuel production multiply – an obvious boon for the environment. Industrial applications could include solid oxide fuel cells (SOFC) for efficient production of electricity and third-generation liquid biofuels like green diesel and gasoline.

In the meantime, Abatzoglou and his research associates are back at the lab bench, exploring the mechanisms that allow the novel catalyst to work so well. He has enlisted several of his students to work on the effort, and takes his role as their mentor very seriously. “They’re society’s future technological leaders,” he says.

If his catalyst yields its chemical secrets, Abatzoglou hopes to keep tweaking the molecule to achieve still greater improvements in efficiency. “There’s no reason to stop where we are now.”