Feb. 19, 2019 - In an effort to improve the feasibility of a renewable energy source, Montana State University researchers are exploring a potential breakthrough in producing biofuel from algae. 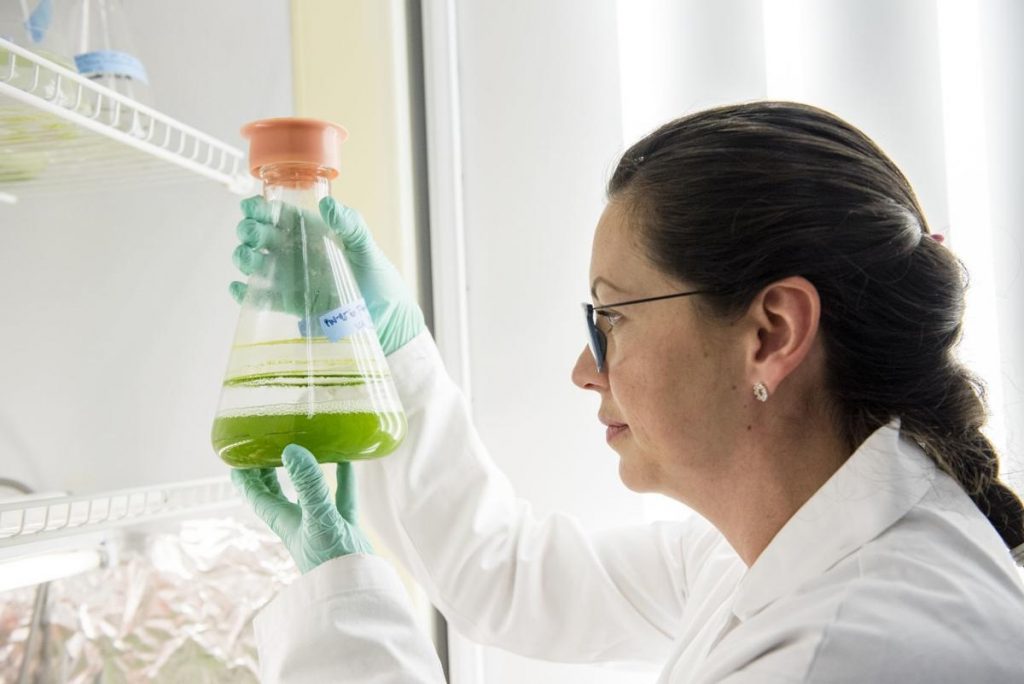 A researcher at MSU’s Center For Biofilm Engineering examines a flask of cultivated algae as part of a biofuel experiment in April 2018.

Backed by a US$3-million grant from the U.S. Department of Energy, the research team — which includes scientists from University of Toledo and University of North Carolina — is in the early stages of a three-year project aimed at developing a biofuel process that could bypass a limitation that has long hampered the industry, according to Robin Gerlach, professor in the Department of Chemical and Biological Engineering in MSU’s Norm Asbjornson College of Engineering.

“This could transform the algae biofuel industry,” said Gerlach, one of the project’s principal investigators.

Like soybeans, camelina and other crops, algae contain oily substances that can be extracted and refined into biodiesel, which differs from ethanol and other alcohol-based liquid fuels produced by fermentation. Typically, algae are cultivated in large water tanks where carbon dioxide is injected to stimulate the growth of the tiny, photosynthesizing organisms.

Interest in algae biofuel peaked during the 1970s energy shortages and has since ebbed and flowed in response to oil prices. But the costs associated with supplying the algae with supplemental carbon dioxide from sources such as coal-fired power plants have discouraged commercial production, according to Gerlach.

Now, the researchers think that a recently discovered strain of algae could be cultivated using only the ambient carbon dioxide of the atmosphere.

“We’re really excited about this,” said Brent Peyton, professor of chemical and biological engineering and director of MSU’s Thermal Biology Institute. Together with Gerlach and others, Peyton has studied algae biofuels at MSU for more than a decade.

The algae, called SLA-04, was discovered by the project’s University of Toledo researchers in an eastern Washington lake containing high levels of carbonate minerals similar to baking soda. In the lake’s unique environment, these algae have been shown to metabolize ambient carbon dioxide very efficiently, Peyton said.

“In the past we’ve found some algae and tried them out (with making biofuel),” Peyton said. “Now we’re using state-of-the-art tools to move the technology forward. This is really quite advanced for a project on algae biofuel.”

For instance, the team will sequence the algae’s DNA and then use a process called metabolic mapping to identify which genes correspond with the algae’s biochemical strategies under a variety of conditions.

“Ultimately, we want to optimize those strategies for biofuel production,” said chemical and biological engineering professor Ross Carlson. For example, the results could be used to fine-tune the amount of carbonate mineral added to the cultivation tanks.

Using the metabolic models, Blake Wiedenheft, associate professor in the Department of Microbiology and Immunology in MSU’s College of Agriculture and the College of Letters and Science, will explore the use of the genome editing technique called CRISPR for enhancing the algae’s ability to produce the oils desired for biofuel.

“I feel fortunate to be part of such an accomplished research team,” Wiedenheft said, adding that the project could also provide insights into algae biology because much remains unknown about the genome of the aquatic organisms.

Project member Matthew Fields, director of MSU’s Center for Biofilm Engineering and professor of microbiology and immunology, said he has long been familiar with the economic headwinds facing the algae biofuel industry.

“If we can find a way that is more cost effective, we could have a big impact,” he said. “This is a major societal challenge, and we’re motivated to contribute to a solution.”

MSU’s portion of the funding is $1.3 million.