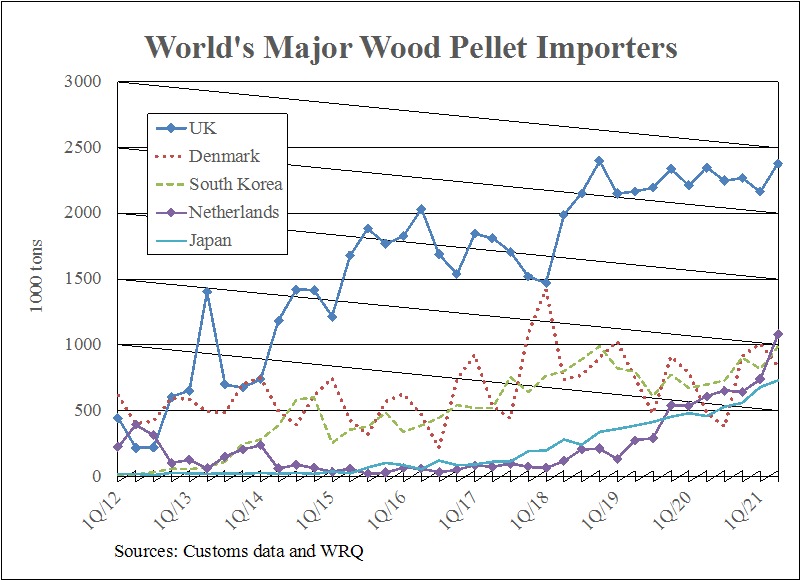 In 2020, wood pellet production in Europe was up four per cent y-o-y and was 34 per cent higher than in 2016, according to data just released by the UNECE. Despite this increase, production has not kept up with consumption, resulting in higher net imports to the continent over the past few years. To fill the supply deficit, Europe has imported almost 10 million tons of pellets annually from the U.S., Canada, and Russia in 2019 and 2020.

Overseas supply to Europe has been on an upward trajectory, doubling between 2013 to 2020. North America’s pellet production rose from 6.5 million tons to 12.2 million tons during this period, primarily driven by European demand.

Russia, while still producing less than the U.S. and Canada, has dramatically expanded capacity over the last seven years, going from 700,000 tons in 2013 to almost 2.3 million tons in 2020. Shipments in 2021 may reach closer to 2.6 million tons, with most of the volume exported to power companies in Europe. Beyond Europe, the only other market that absorbed a significant amount of these additional shipments has been South Korea, which accounted for about seven per cent of the Russian export volume in the first eight months of 2021.

Global wood pellet trade has steadily increased over the past decade, reaching an all-time high in late 2020. The United Kingdom has been the primary destination for wood pellets globally since 2012, but import volumes have stagnated over the past three years (see chart). Instead, the Netherlands, Denmark, and Japan have increased imports substantially in recent years and, for the first time, imported more pellets than the UK in the 1H/21. Five years ago, the UK was the world’s largest market for wood pellet shipments, accounting for over 50 per cent of global trade; in the 2Q/21, its market share declined to 34 per cent.

Import prices for industrial wood pellets ranged between $160-200/ton in the 2Q/21 and were generally higher than in the same quarter in 2020 (see the latest issue of the WRQ). Denmark and the United Kingdom, the world’s two largest importers, had the highest pellet prices. The Netherlands, which increased imports dramatically from 2017 to 2021, has seen annual import prices rise from $150/ton to $190/ton over the past four years.

Are you interested in worldwide wood products market information? The Wood Resource Quarterly (WRQ) is a 75-page report established in 1988 and has subscribers in over 30 countries. The publication tracks sawlog, pulpwood, lumber & pellets prices and reports on trade and wood market developments in most key regions worldwide. For more insights on the latest international forest product market trends, please go to www.WoodPrices.com