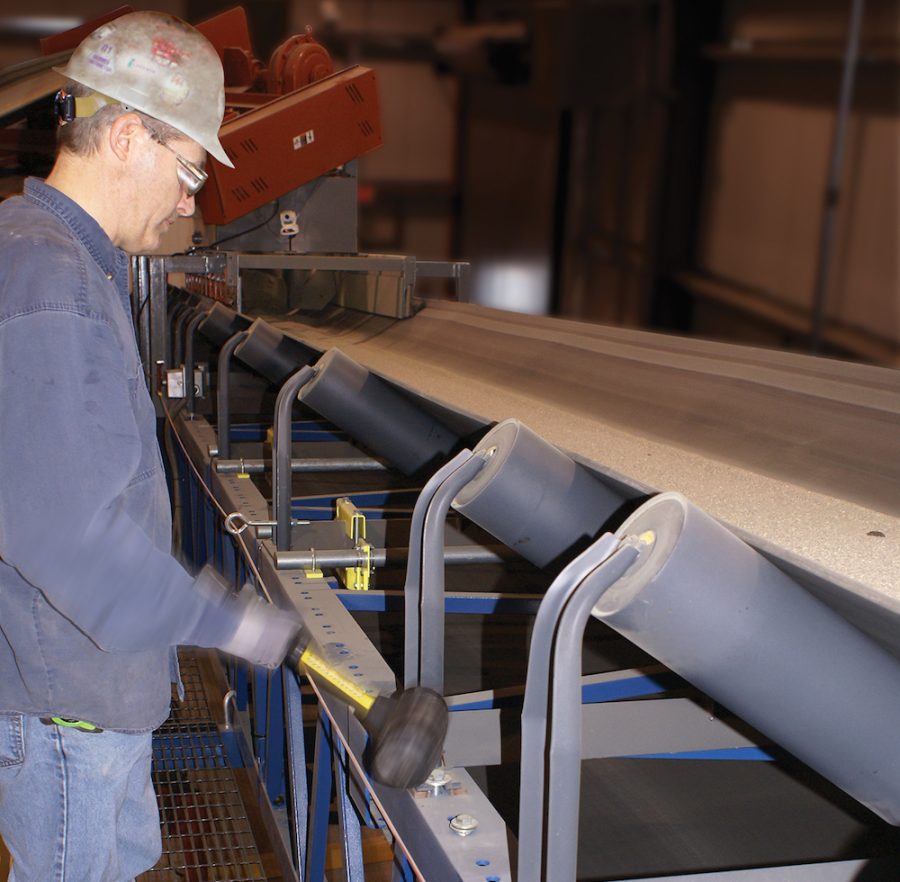 On any belt conveyor system that moves bulk materials, the belt must run straight and true to maximize its life, minimize fugitive material and safety hazards, and achieve high system efficiency. There can be many consequences of a mistracking belt, but all result in higher costs and increased maintenance. Even a slight belt misalignment can lead to a variety of issues, from small annoyances to full-blown catastrophes.

The most obvious effects include spillage and dust that require personnel to do cleanup, which is unproductive work that introduces risks from activities in close proximity to the moving conveyor. Spillage from non-centred cargo often gets into idlers and pulleys, reducing bearing life and causing them to seize, leading to friction damage on the belt and potentially starting a fire.

A misaligned belt can also come in contact with the stringer, causing fraying, shredding or splice damage. Great lengths of valuable belting can be destroyed with surprising speed, and even the support structure itself can be damaged. A compromised bracket or support can cause a catastrophic idler failure, which could damage other components of the system and require extensive downtime to repair. Further, there is potential for injury from a damaged belt or loose idler not to mention the increased exposure to injury from too frequent a need to clean.

“I’ve been working around conveyors for 20 years, and I’ve seen thousands of belts,” observed Martin Engineering Process Engineer Dan Marshall. “I’ve seen just about every problem that can be caused by a mistracking belt, but one thing I’ve never seen is a belt that runs true right out of the box. All conveyors, no matter how well designed and built, have some belt wander.”

A wide variety of circumstances can lead to mistracking, and operators have tried many things to correct the alignment. Some have elected to place an obstacle such as a block of wood in the belt path, so it won’t travel too far out of line. This occasionally improves the situation, but more often it’s just temporary and the belt will eventually slice through the obstacle.

Many operators have realized that pivoting an idler is a quicker and more effective way to steer a belt. This common approach is called “knocking an idler,” striking it with a hammer to move it slightly and realign the belt.

Equipment manufacturers have also designed components to help align a belt, and these solutions can be successful in specific applications. They include specially-shaped rollers, angled idlers and devices that apply pressure to the belt edge to push it back in line. 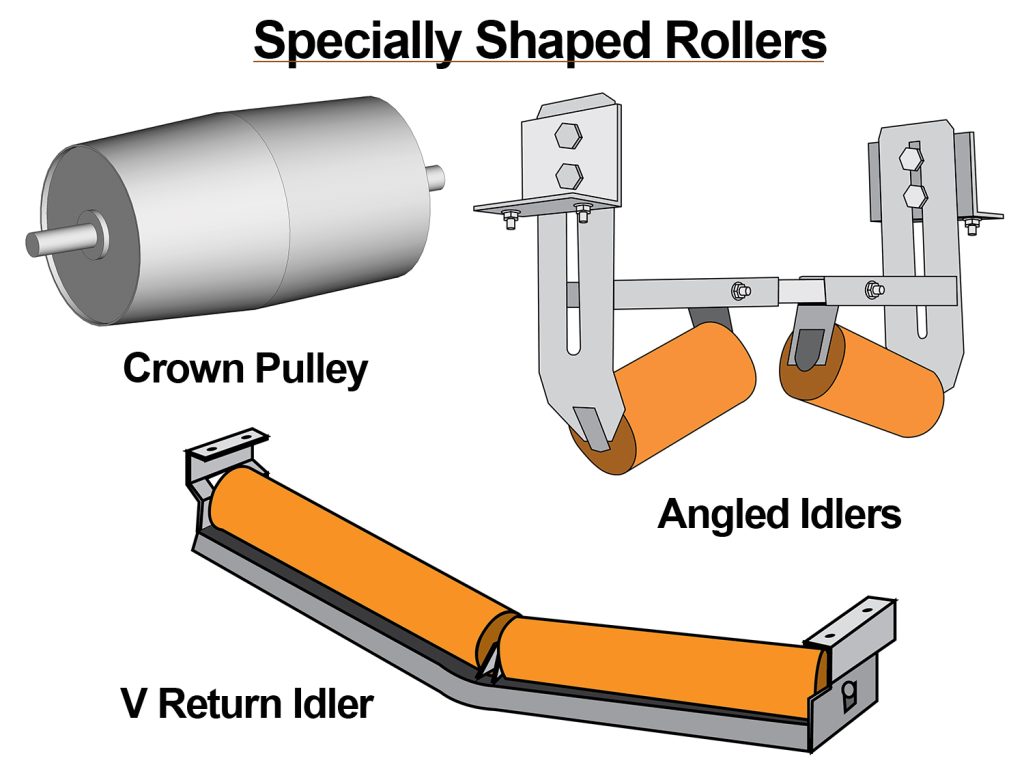 “While these mechanisms can improve a belt that’s consistently off-centre in one direction, they do not react to dynamic belt movement, meaning that they don’t correct intermittent belt wander,” Marshall continued. “To combat such changing conditions, engineers designed the tracking idler. Unlike the edge correction approach, the device senses belt movement in either direction, and pivots the idler slightly to steer the belt back into position. It doesn’t apply a great deal of force to the edges, which can damage a belt and splices. When the belt is running true, it remains centred, and when it senses a misaligned condition, it gently corrects the belt.”

Unfortunately, to accommodate limited space availability, tracking idlers typically have short sensing arms. This requires a fairly large belt displacement to create a small movement of the idler. While these designs do tend to improve tracking, there are limits to how much correction they can deliver, and short sensing arms can actually pinch a belt if the idler pivots too far. To combat this, some operators choose to “tie off” a tracking idler to limit its movement. While the practice can help preserve the belt, it doesn’t address significant mistracking.

To overcome the limitations of existing belt alignment devices, Martin Engineering has invented and patented a Multi-Pivot Belt Tracker, which employs sensors, pivoting idlers and geometry to align a wandering belt. The sensors avoid pinching the belt, and the engineered geometry amplifies any detected misalignment to create a greater pivot. 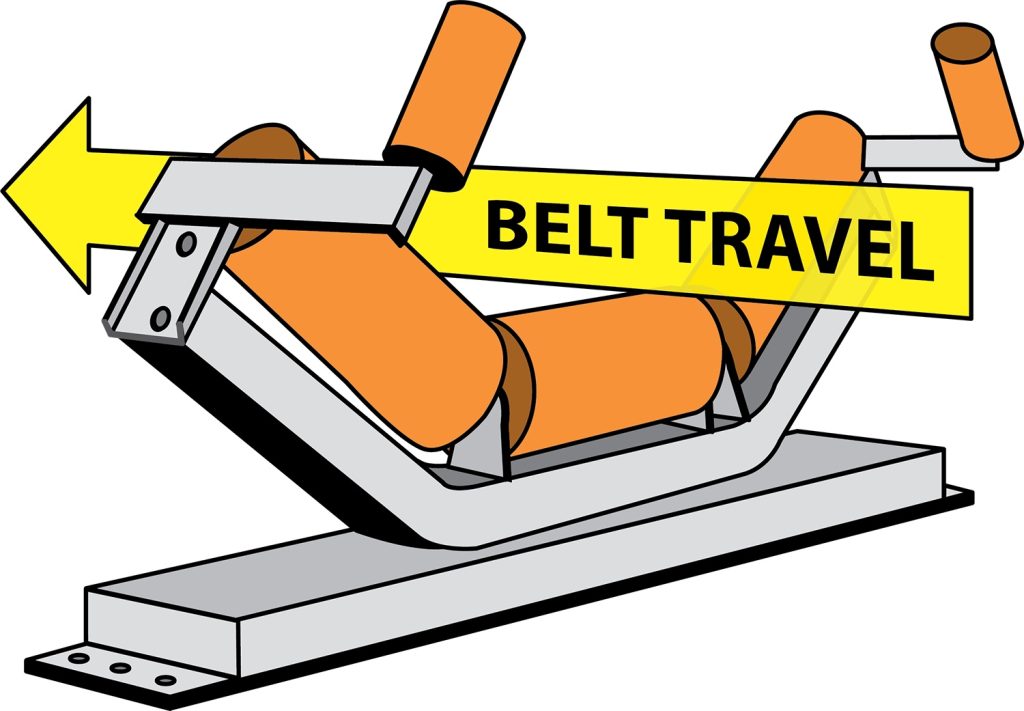 Multi-Pivot Belt Trainers use longer arms than other designs, positioning the guide rolls further from the pivot roller, as well as closer to the belt edge. The closer proximity allows guide rolls to sense very slight misalignments and make immediate corrections. Rather than waiting for a powerful mistracking force, the longer arms require considerably less pressure to move the pivot roller. The result is better correction with no pinch points and less wear on conveyor and tracking equipment, for longer and more efficient service life. Specific designs are available for both the load-carrying belt path and the return run.

“Installing trackers is the economical solution, but operators should do a full analysis and consider also addressing other causal issues,” Marshall added. “By focusing solely on belt alignment, plant personnel may miss other opportunities to increase production and relieve some of the burdens on their system.”

Keeping the belt centred and moving quickly is the key to high production, controlled operating cost and a safer workplace. “Misalignment causes downtime and costs money,” Marshall concluded. “But nothing causes more downtime and expense than a destructive belt fire or other catastrophe as a result of inattention to mistracking problems.”

R. Todd Swinderman, P.E., is the CEO Emeritus of Martin Engineering. R. Todd Swinderman earned his B.S. from the University of Illinois, joining Martin Engineering’s conveyor products division in 1979 and subsequently serving as vice-president and general manager, president, CEO and chief technology officer. Todd has authored dozens of articles and papers, presenting at conferences and customer facilities around the world and holding more than 140 active patents. He has served as president of the Conveyor Equipment Manufacturers’ Association and is a member of the ASME B20 committee on conveyor safety. Swinderman retired from Martin Engineering to establish his own engineering firm, currently serving the company as an independent consultant.