Nov. 2, 2017 - For more than 100 years, biochar, a carbon-rich, charcoal-like substance made from oxygen-deprived plant or other organic matter, has both delighted and puzzled scientists. As a soil additive, biochar can store carbon and thus reduce greenhouse gas emissions, and it can slow-release nutrients to act as a non-toxic fertilizer. 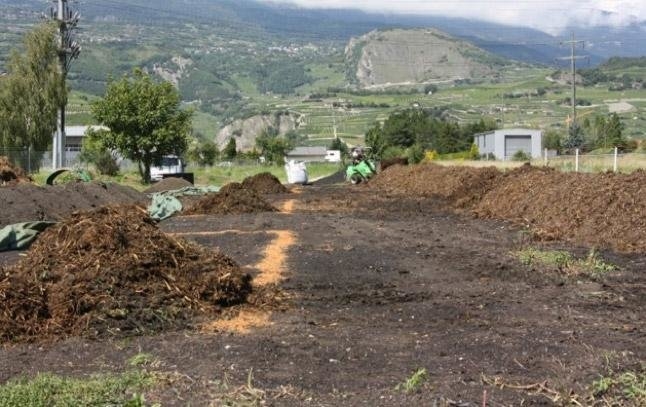 This is a field experiment in Switzerland

But the precise chemistry by which biochar stores nutrients and promotes plant growth has remained a mystery, so its commercial potential has been severely limited.

Now, an international team of researchers, with key contributions by Colorado State University experts, has illuminated unprecedented detail and mechanistic understanding of biochar’s seemingly miraculous properties. The Nature Communications study, led by Germany’s University of Tuebingen and published Oct. 20, demonstrated how composting of biochar creates a very thin organic coating that significantly improves the biochar’s fertilizing capabilities. A combination of advanced analytical techniques confirmed that the coating strengthens the biochar’s interactions with water and its ability to store soil nitrates and other nutrients.

This improved understanding of biochar’s properties could trigger more widespread commercialization of biochar fertilizers. Such a change could reduce global dependence on inorganic nitrogen fertilizers that have served as modern food-production workhorses for more than a century.

“To characterize a super-thin carbon coating on a carbon substrate is nearly impossible,” Borch said. “Our international team used many different advanced techniques to perform the analyses. Robert Young led our group’s contribution of ultra-high resolution mass spectrometry to investigate the coating and probe its elemental makeup.”

The study was led by Andreas Kappler, of the Center for Applied Geoscience at the University of Tuebingen, and geo-ecologist Nikola Hagemann. The authors set out to investigate biochar before and after composting with mixed manure. Using a combination of microscopic and spectroscopic analyses, the researchers found that dissolved organic substances played a key role in the composting of biochar and created the thin organic coating.

“This organic coating makes the difference between fresh and composted biochar,” Kappler said. “The coating improves the biochar’s properties of storing nutrients and forming further organic soil substances.” Hagemann added that the coating also developed when untreated biochar was introduced into the soil — only much more slowly. Composting experiments were carried out on a small commercial scale using infrastructure and expertise of the Ithaka Institute in Switzerland.

Excessive use of mineral nitrogen fertilizers or liquid manure in agriculture has serious impacts on the environment. Such fertilizers cause the emission of nitrous oxide and result in nitrates leaching into the groundwater. As an eco-friendly alternative, scientists have suggested adding biochar as a nutrient carrier into the soil. But use of biochar on a large scale has not been economically viable because so little was known about exactly how it stores and releases nitrates.

“In agricultural crop production, higher yields usually only occur when biochar is applied together with nutrients from non-charred biomass such as liquid manure,” Hagemann said. “Using biochar without adding nutrients or with pure mineral nutrients has proved to be far less successful in many experiments.”