In the past few years, there has been a sort of war of words between certain environmental advocates and the forest industry about the sustainable nature of Canadian forestry. This is an issue that Ian Dunn, president and CEO of the Ontario Forest Industries Association (OFIA), addressed in his opening remarks at OFIA’s 79th annual convention on April 19.

“Forestry is a solution, not a threat” when it comes to fighting climate change, he said.

“We need more active management of forests, not less, to meet the challenges of a changing climate,” he continued. “There is this misconception that our industry – your industry – is operating without limits, to the detriment of the health of forests. We are here every day sharing the truth.”

And many of the speakers at the event touched upon how the forest industry can help create a low-carbon, green economy. They discussed how to make forestry more sustainable and resistant to the impacts of climate change, future demand for green wood products, new opportunities for the industry, and the role biomass will play in the fight against climate change.

Mahima Sharma, director of environment, innovation and mill regulations with the Forest Products Association of Canada (FPAC), kicked things off by discussing how to reduce greenhouse gas (GHG) emissions in forestry and the potential impact of new environmental regulations coming down the pipeline.

According to Sharma, GHG reductions from the forest products sector can be segmented into five buckets:

But, to effectively fight the challenges posed by climate change, there is a need to grow markets for low-grade wood residues.

“We must find a new path forward for these materials, and Canada’s emerging bioeconomy holds great promise for this,” she said. “It’s promising to see provinces come out with their own biomass plans, such as Ontario Forest Biomass Action Plan. [But] to further enable this, the right federal and provincial funding programs also need to be in place.”

Federal and provincial support is also needed to make lumber and pulp mills net-zero carbon emitters within the next few years, she said.

This will be critical for the future of the industry, as the federal government’s emissions reduction targets will increase the cost of carbon, she explained. The cost of carbon is set to go up from $50 per tonne to $170 per tonne by 2030, and the Clean Fuel Regulation will also increase the cost of fuel because fossil fuel producers will offset their costs by charging customers, such as forest products companies, more. The cost of electricity will also increase once the proposed Clean Electricity Standard is enacted, she explained.

“We’re looking at a cumulative cost from those three regulations of upwards of $1 billion by 2030,” she said.

However, there are also some key opportunities for the forest sector to help in the fight against climate change, including in the federal government’s recently-released Emissions Reduction Plan, new investments in green buildings (especially mass timber), and climate mitigation activities such as Biomass Energy Capture and Carbon Storage (BECCS), she shared.

Chris Mar and Daniel O’Brien, partners at PwC, discussed the opportunities that Industry 4.0 present for forestry.

While government funding is needed to further advance Industry 4.0 in the sector, there are three key challenges to this, O’Brien explained: attracting skilled labour into the workforce; the increasing cost of production and how the industry can remain competitive globally; and the increasingly constrained land base, especially given the old-growth deferrals in B.C.

PwC worked with the World Business Council for Sustainable Development’s forestry sustainability group to understand the key drivers for them in the transition to a new green, low-carbon economy. Ultimately, they discovered two major variables: the future cost of carbon, and the potential of climate technology to be part of that solution in terms of emissions abatement, Mar explained.

Consequently, “the key drivers for the forest sector are really about decarbonizing the value chain and the concept of carbon-positive land-use, where you’re increasing the carbon mitigation of a land base while harvesting products that can play a role in carbon sequestration and contribute to the circular economy, and production innovation as well – getting more value out of the land base,” he said. 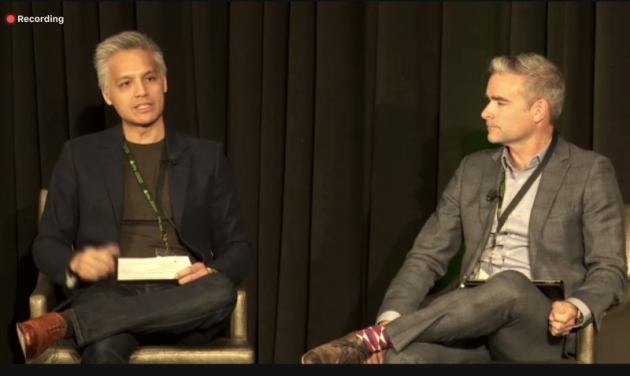 ‘The sky’s the limit’

There are multiple ways the industry can leverage new drone technology, especially once the draft regulations for lower-risk beyond visual line of sights (BVLOS) drone flights are released later this year. These regulations will clear the way for BVLOS flights in areas with less than 0.1 people per square kilometer. “The opportunity [for the industry] is huge,” he said.

“What’s compelling is where [drones] start to squeeze on the carbon market – the impact of emissions with hybrid drones that can start to squeeze out the traditional ways we’re used to looking at forests, like helicopters, which are extremely expensive and carbon intensive,” he added.

Drones are already being used to supplement tree planting, with two companies in northwestern Ontario deploying drones for aerial seedings.

They can also be used for pile measurement and asset management, by accurately and safely measuring piles while minimizing the interruption to operations. One drone, called DGI – a fully autonomous, self-contained box that can be remotely operated from anywhere – is already doing this, which opens up opportunities to deploy it for mill asset management, Bilyk shared.

In the near future, new drones will take autonomous operations even further. For example, a company called AirForestry has developed an 80-kilogram drone that can do aerial thinnings.

“They’re grabbing the trees without having to put in thinning trials and conducting aerial operations by drone,” Bilyk explained. “It does it all automatically – identifying the top, grabbing it, cutting it and lifting it.”

Bilyk concluded his presentation with a call to action: “Whether it’s from a cost angle, a safety angle or a carbon angle, I challenge every organization here to adopt drones rapidly,” he said. “The sky’s the limit.”

The biggest opportunity for the forest industry is the developing bioeconomy. The last few sessions of the day specifically discussed the potential uses for biomass in offsetting GHG emissions and providing heat and power to communities.

According to Stephen, Canada’s forests are no longer acting as carbon sinks, but rather carbon sources, as a result of wildfires and pests.

“A lot of [environmentalists] say we should reduce harvests to solve this problem. But, what’s driving emissions is the ‘other managed forests’ – those not subject to human activity, because of wildfires and pests,” he explained. “Harvests are actually inversely correlated to GHG emissions; the less we’re cutting, the more emissions are going up.”

According to Natural Resources Canada, climate change will triple or quadruple the number of large wildfires and the area subject to wildfires. So, by 2035, GHG emissions from forests will exceed emissions from human activity, Stephen shared.

What can the industry do about this? The answer, Stephen said, is climate smart forestry, which includes active forest management, storing carbon in solid wood products, developing bioheat and biomass energy carbon capture and storage (BECCS).

To do this successfully, Ontario needs to increase its timber levels back up to the levels seen in 2000.

“If you took the timber harvest from where we were in 2000 and brought it up to where we are now, to replace natural gas, it would result in nine million tonnes of GHG reductions per year,” he explained.

But, of course, this will require markets for low-grade biomass. Bioheat is one key market that needs to be developed, Stephen said.

The main opportunity with bioheat is district energy systems. But, Canada is far behind other countries when it comes to district energy. In other northern countries, the population served by district energy ranges from 55 to 95 per cent; in Canada, that number is just one per cent. This needs to change in the coming years, or else Canada will not be able to meet its climate change objectives, Stephen said.

The final session of the event was a panel discussion with Mark Lockhart, general manager of a NRFM Inc./VFM Ltd., which operates a Sustainable Forest License (SFL), and Tony Roberto, manufacturing services manager for Resolute Forest Products’ Thunder Bay pulp mill, about how to transform the forestry value chain in Ontario. Chris Walton, CEO of the Centre for Research and Innovation in the Bioeconomy (CRIBE) moderated the discussion. 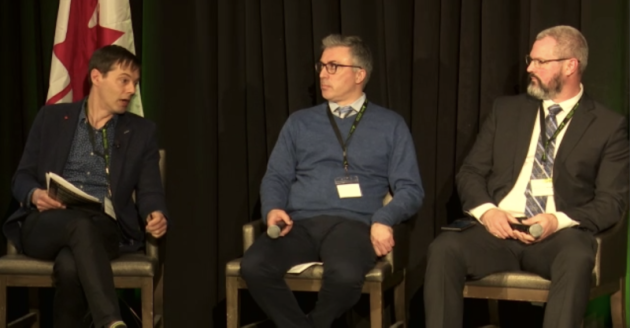 Walton first gave an overview of the work CRIBE has been doing to build out “world-class” value chains, including investing in the commercialization of lignin.

One of the two existing commercial applications to break into the lignin market is from Ontario – a pilot plant in Thunder Bay has successfully demonstrated this technology. But, CRIBE has struggled to commercialize the project, an issue facing the Canadian bioeconomy in general, Walton said.

To solve this issue, CRIBE brought the lignin value chain together, including producers of lignin and potential brand-name users, and identified four to five opportunities to commercialize the product. In 2020, they launched two commercial innovation challenges, asking companies to come up with a consortium that represents the full value chain, with commercial trials in Ontario that CRIBE will fund. Five consortiums, consisting of 24 companies, were ultimately formed.

“This is a good example of what’s required to commercialize and build value chains,” Walton said.

Lockhart and Roberto then shared how the lack of a complete value chain impacts their operations and the work they’re doing to address this.

Lockhart explained how NFRM Inc./VFM Ltd., as an SFL, has been working to develop partnerships that will use low-grade fibre. Without a market for low-grade fibre, SFLs have to leave higher grade fibre on the stump, which confuses the public, he explained. Leaving the wood on the ground also increases the cost of silviculture and the technical difficulty of successfully regenerating healthy forests.

NRFM/VPFM has begun working with governments to create strategies to deal with the unmarketable wood, which helps the SFL’s existing users stay productive. They have also been working with OFIA to talk about forest sector strategies, as well as participating in projects with CRIBE.

Roberto then shared how Resolute’s Thunder Bay operations have been working to use as much of each log as possible. There are three sawmills in the surrounding area that use the sawlogs, while lower-grade fibre goes to the pulp mill, and the biomass and sawdust produce electricity for the mills.

“What I think the industry as a whole has to do is capture every possible ounce of the wood and utilize it as efficiently as possible,” he said. “This model is working very well for us, it’s very efficient.”

Lockhart also shared how using hog fuel from operations in the SFL have helped not only to provide revenue and power, but also reduced the need for silviculturers to treat the areas where biomass was pulled out of the forest, thereby reducing costs.

A new entrant that uses biomass would help the SFL “complete the circle, reach that point we’ve written and talked about for years and years,” he said.