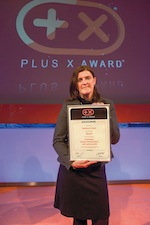 May 29, 2012 - OkoFEN, a leading producer of pellet-heating systems in Europe, has been awarded with a series of awards for its new heating circuit controller, including "Best Product of the Year 2012."

May 29, 2012 -OkoFEN is one of the leading producers of pellet-heating systems in Europe and relies strongly on innovative products. The company has now been awarded for its new heating circuit controller Pelletronic Touch in four categories with the “Plus X Award 2012” – the world's biggest innovation prize for technology, sports and lifestyle products – and also honoured with the special title of "Best Product of the Year 2012". "This award is for us and our employees a great recognition and motivation to continue developing innovative products", says OkoFEN CEO Herbert Ortner.

Every year a jury of more than 130 international experts vote the most innovative products for the “Plus X Awards”. This year the awards were given out at a major awards ceremony in Cologne. A new product from OkoFEN has particularly convinced the prestigious committee: The heating circuit controller Pelletronic Touch was awarded for "innovation", "design", "ease" and "functionality". Moreover, the jurors voted the touch screen pellet boiler controller for "Best Product of the Year 2012" in its category. Thereby, the innovative controller ranks among products like the Opel Ampera and Apple's iPhone, which also were awarded the "Plus X Award".

With the Pelletronic Touch, OkoFEN upgrades its heating controller series to a modern touch screen system. The newly designed control panel with clear colour display allows a quick and intuitive navigation, and thereby an optimum user experience. As the logical development of the successful "Pelletronic Plus" series, The Pelletronic Touch continues offering all the proven features of its predecessor, such as individual temperature and time programs for each heating circuits and domestic hot water, antifreeze function, party and screed functions or the solar-yield measurement.

Control with a Smartphone

As a special highlight OkoFEN offers together with the Pelletronic Touch a mobile web app which allows the control of the heating system over Smartphone. The user interface is downloaded from the internet by the browser and is ready to use – without software installation – on your Smartphone or tablet. Of course, the web app works also on conventional computers. Furthermore, additional functions such as the cascade function – the possibility of combining several pellet boilers – and the solar control have been optimized.

With its clear design and excellent user comfort with intuitive user interface and location independent online access, the Pelletronic Touch is currently the smartest product for pellet heating control.

With over 20 years experience in biomass heating, OkoFEN is considered the pioneer and specialist in pellet heating. Much of what is now standard comes from OkoFEN’s R&D department. To date, more than 45,000 pellet heating systems have been sold. The export share of the company is currently 83 per cent. The company has subsidiaries in Germany, France, Italy, Belgium and Switzerland. From its headquarters in Niederkappel, OkoFEN distributes its products to the professionals in the field through regional distributors in 16 countries worldwide.