December 3, 2015 - In northern Ontario, forestry is a way of life. Surrounded by trees as far as the eye can see, much of the province that lies above the 49th parallel is surrounded by lush forests full of jack pine, white spruce and black spruce. 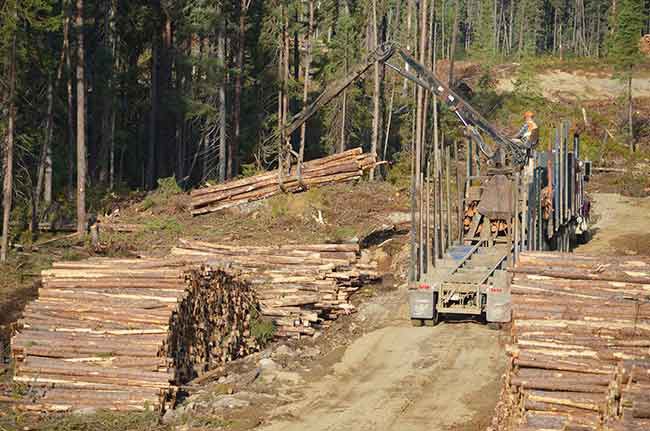 Many children are exposed to the forest industry at a very young age, through school field trips, weekend hikes through the woods and the tales of family members who have toiled their way through the industry.

For Jason Rouillard, it was working the family’s woodlot with his dad that hooked him on working in the forest from a young age. Rouillard’s family owned a private woodlot, and father and son would log the land using a chainsaw and cable skidder. The elder Rouillard was also a staple of the forest industry, working in management with Resolute for 32 years.

For Rouillard to find his way into the forest for his career, with that much sawdust already running through his veins, was a surprise to absolutely no one.

Formally, Rouillard started his career as Jason Rouillard Logging in 2003, working as a subcontractor for a contractor who was logging for Abitibi in Thunder Bay. When he first started, Rouillard owned a single piece of equipment, a harvester. As he became more aware of the needs of the operation, he added a forwarder, then a road machine to start building resource roads, and the business grew from there.

“One machine led to another machine, which led to us taking on the whole job from the stump right to the mill gate,” Rouillard says.

In 12 years, Rouillard has managed to grow his one-man show to a crew of eight in the forest, plus four truckers (all brokers) for hauling the wood.

Slow recovery
It hasn’t always been easy for Rouillard and his team, who endured the devastating recession that knocked so many out of the Canadian forest industry.

What has allowed Rouillard and his team to weather the storm, initially, was the ability to specialize in wood lengths that were still experiencing a reasonable amount of demand.

But the recovery from the crash has been slow, making it difficult to stabilize profit margins and look towards future growth. Also, there has been no significant bump in the price paid for logs from the forest, and some of the lumber cut gets rejected before it even makes it to the sawmill site.

Biomass emerges
But in the last several months, the emergence of a new sector has provided greater stability for logging operations like Rouillard’s; the wood pellet sector.

The arrival of Rentech in Atikokan which, at capacity, is expected to produce upwards of 100,000 tonnes of white pellets per year, has provided a source for fibre rejected by the sawmill.

“It’s a good market that accepts any kind of wood,” Rouillard says. “Like the wood that is not well-suited for the sawmill, for lumber, we can send that to Rentech. It’s value added to any forest that is not good for lumber.”

That’s good news for logging crews in the area surrounding Atikokan, where 45,000 tonnes of Rentech’s pellets are being used as fuel at the OPG generating station. The financial prospect of cutting wood strictly for use by Rentech is not a very profitable one based on today’s pricing structure, but it certainly provides piece of mind in cutting blocks when a significant percentage of thin, broken or bent stems can destroy any chance of a profitable venture for a logging crew.

The logs themselves are chipped onsite at Rentech’s plant at Atikokan, providing another cost savings measure for the logging contractors. Rather than having to chip or grind the wood on site, then transport the chips to the pellet plant, the contractor can instead divert a truck of logs to the pellet mill rather than its usual destination, the sawmill.

With the intake at Rentech, the new opportunity at least provides a break-even outlet for the wood not usable for the mill, which provides financial security for logging contractors.

Challenges remain
Like many harvesters in regions where wood supplies are plentiful, there is still the challenge of getting qualified operators to run the equipment.

“I’ve heard other contractors abroad say the same thing; it’s hard to get good, solid people,” Rouillard says. “We’re not seeing a whole lot of young people coming in to the trade, learning it and sticking with it. Finding good quality people in general is getting harder.”

Rouillard believes that if the entire wood products industry can find stability, whether it be through secondary avenues for products like biomass, or a steady market for Canadian lumber, that will be the most valuable tool in attracting people to work in the woods.

Along with that stability comes a commitment to real education for the sector, not just generic heavy equipment or heavy machinery training. That means setting up formal education based on the equipment and technology that is in use in the forest, including chippers, grinding, harvesters, forwarders and logging trucks. Combined with the new technologies that could appeal to a generation that has grown up with innovations in software and computer engineering, these programs could attract a younger generation to work in the forests throughout Canada.

Thanks to the stability that the emergence of northwestern Ontario’s wood pellet sector has provided for contractors like Rouillard, he and other industry professionals might finally be able to able to spare the time to build a plan to attract the next generation to the industry rather than continue to constantly stress about the bottom line.