Jan. 17, 2017 - The Fraser Institute has published a study that finds improvements in air quality in Ontario post coal phase out are comparable to what could have been achieved by new pollution control systems at the shuttered coal plants. 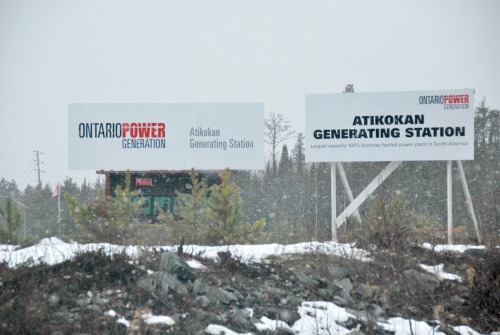 OPG's Atikokan Generating Station opened in 2014 after a two-year conversion to wood pellets from coal.

The study, conducted by University of Guelph economics professor Ross McKitrick and Elmira Aliakbari, argues that the results have, “implications for understanding the costs and benefits of a coal phase-out, such as the one being contemplated in Alberta.”

In 2005, the province of Ontario began a process that would eventually lead to the phasing out of its coal-fired power plants, the largest of which were the Lambton and Nanticoke facilities in southern Ontario. The rationale for shuttering these plants was a 2005 cost-benefit analysis that assumed that about $3 billion in annual savings to the health care system would come from the reduction of smog-related air contaminants. However, that analysis, and another one done for the province the same year on the effects of cross-border air pollution, reported that the phase-out of coal would have only very modest effects on Ontario air quality, which is consistent with emissions inventory data showing that electric power generation was a minor contributor to particulate and ozone pollution at the time. The cost savings estimate came from assuming very large health effects associated with very small changes in air pollution.

In the aftermath of the coal phase-out, and the extremely costly changes to the electricity system this transition required, we examine whether the removal of coal from the grid explains changes in air pollution levels since 2002. We develop statistical models of air pollution concentrations in Hamilton, Toronto, and Ottawa, looking at monthly average levels of fine particulates (PM2.5, or particulate matter smaller than 2.5 microns), nitrogen oxides (NOx) and ground-level ozone (O3). Our explanatory variables include electricity generation from coal-fired and natural gas-fired power plants, NOx and PM2.5 emissions from other sources in Canada and the US, weather conditions, and seasonal indicator variables.

We find the elimination of coal was associated with a reduction in average urban PM2.5 levels by about 1 to 2 mg/m3 (about 6–12 percent from the peak levels), but the effect was not statistically significant in Toronto or Hamilton. We find no evidence that the coal phase-out reduced NOx levels, which were instead strongly affected by reduction in US NOx emissions. We find a statistically significant reduction in peak O3 levels from the coal phase-out, offset by a significant increase associated with natural gas plant emissions.

Overall, we conclude that the coal phase-out yielded small improvements in air quality in some locations, consistent with projections done prior to the plant closures, which were comparable in size to projected air quality improvements that could have been achieved through installation of new pollution control systems rather than closing the plants. This has implications for understanding the costs and benefits of a coal phase-out, such as the one being contemplated in Alberta.

McKitrick told Northern Ontario Business the study is a warning to the federal government.

“Policymakers in Ottawa should note how Ontario’s coal phase-out failed to achieve its stated goals as they promise to impose the same failed strategy nationally,” McKitrick said.