Feb. 18, 2015 - One of the oldest and most prolific pellet producers in Canada, Pacific BioEnergy operates in Prince George at the heart of the mountain pine beetle epidemic that devastated B.C.’s forest region. Though the region is the forestry capital of Canada, the epidemic has wiped out up to 80 per cent of the forest’s live trees. Sawmills have closed and as the dead trees continue to deteriorate in value, the competition for fibre is tightening. 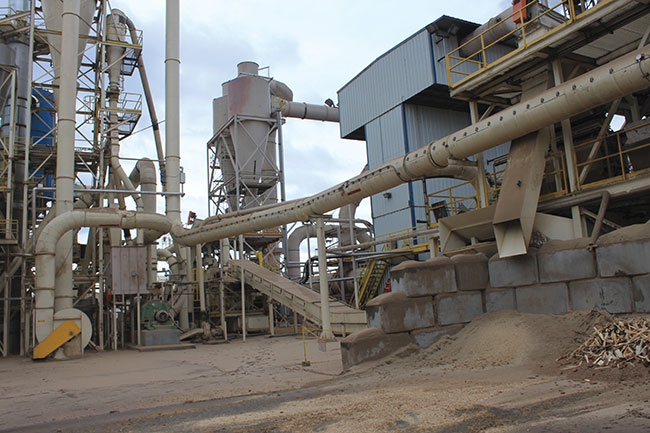 Much of the pine forest is nearing the end of its use as sawlogs and most of the trees left standing are remote, making the logging costly.

Waste not, want not
Pacific BioEnergy’s current pellet plant was built in 2007 to turn unwanted sawmill shavings into sellable wood pellets. But it has been redesigned to accept a full array of feedstock to take advantage of the abundance of dead pine that make up the region’s forests.

“We purposefully designed it understanding we had to be as sharp as we can on buying fibre and be as competitive as we can on processing it. So that’s the philoshophy behind it,” explains Brad Bennett, the vice-president of operations for Pacific BioEnergy.

Selling into the European market means adhering to very strict standards. The pellet mill in Prince George was designed to achieve those standards no matter what raw material was secured as the feedstock. Designed to be versatile, it uses sawdust, shavings and even up to 60 per cent forest residuals.

“If we are versatile in what we can use, we can be selective when we buy from sawmills,” Bennett says.

Finding the right mix of fibre is tricky even when the mill is designed to make high quality pellets out of broken trees, tops and limbs that would otherwise be burned on site. There is a lot of bush grind to be bought, but the company has to be selective in which operations it buys from and how far these residuals are being trucked.

“How much you want dictates what it’s going to cost,” Bennett says. “The more you want – you just keep pushing yourself up the cost curve.”

Theoretically, the mill can run on 100 per cent bush grind with the addition of another Biosizer, but the mix has remained below 60 per cent to date. Its fibre content fluctuates depending on what makes the most economic sense and what is available.

Not all waste is fit for pelletizing
The most important part of pelletizing bush grind is staying on top of the quality of the raw material. It is important to take the time to pre-select the material before it is harvested.

“We’ve learned operating in the field you don’t want to get every last stick. If the guy is picking the dirt out and mixing it into the ground material, it will just end up in our plant.”

Some sites are at a higher risk of contamination and a lot of the company’s quality control includes making sure the raw material is managed properly from the get-go.

Bennet explains, “We’re starting to evolve into a cycle so people are providing us with their plans beforehand so we can select blocks that we think make sense for us. We communicate with them what we need from a quality perspective and ask that they prepare it so we have the best chance of success with the material. The worst thing would be to get good raw material but because it’s been prepared improperly, we turn our nose up at it and say, go ahead and burn it because we can’t use it.”

Rocks, root balls and dirt resulting from pushing the residuals into a pile can cause havoc in the pellet mill. But, the company has started making strides and Bennett believes the primary licence holders are now more attuned to what pellet mills need – which is for them to handle the material as little as possible. The company has three grinding contractors who grind roughly 120,000 tonnes a year in total.

When it comes to affordability of raw material, moisture content and distance can determine the best value. “Forest residuals are actually better in some cases than wet sawdust that’s brought in from a long distance even if they may be cost competitive. Sometimes the pine’s better because it has a lower moisture content,” Bennett says.

Wet sawdust can require as much as a third of its volume to get the other two-thirds dry enough to pelletize. And besides the economic advantage of using the dead, dry pine, there are social benefits to keep the residuals away from the match. Nobody likes to think of all that wood going up in smoke.

Finding the right mix of fibre is tricky

Running the mill
It takes about 40 employees to keep the pellet plant running 24 hours a day, seven days a week, but half the crew is on maintenance duties. In fact, the mill could run on as few as two people: one loader operator to put the raw material into the plant and somebody to operate it. In reality, however, on top of the two essential operators, there are a couple loader operators, a quality control crew, a crew loading the finished pellets into rail cars and those maintaining the machinery and keeping the plant clean.

The forest residuals go through a Brunette Biosizer to reduce them to the required size before joining the sawdust and shavings on the conveyor belt. It goes through a metal detector, which aborts the material by reversing the belt if metal is detected. The mill has an old hammermill that isn’t very efficient but can be used if it’s needed to grind extra forest residuals. When it isn’t needed, the material is diverted around the piece of equipment to conserve power.

The material passes through a SolaGen single pass dryer that isn’t slowed by the wide range of moisture content. “The theory is the lighter, smaller particles will go through the dryer very quickly, the larger and heavier particles will take longer to move through,” Bennett says.

The dryer uses what is called “flighting” to lift the fibre and cascade it through the heated gas stream. It creates suction that draws the material through the dryer and into a cyclone which then separates the air from the fibre, drops the fibre into an airlock and the air flows through a PPC Air Pollution Control Systems electrostatic precipitator.

A lot of the fire explosion risk is within the drying system itself, but if the dryer is tightly sealed, the material is processed in a hot, steamy but oxygen-free environment. Operators need to follow procedures carefully at start-up and shut-down to avoid introducing oxygen into the system, but Bennett stresses the system is perfectly safe in operation.

The system is well monitored to detect any defects or explosion risks (with 40 zones of extinguishment throughout the mill that are all computer-monitored) and there are aborts built in to safely redirect any explosions. There is a burner chamber that runs on wood dust and residual heat is recycled within the system. Particulates from the process are scrubbed out of the exhaust before it is released.

Bennett is well versed on how the particulates are kept out of the atmosphere. “That water attaches itself to the particles and there’s an electric charge that draws the particle with the water to the sides of the tubes. There’s a whole series of tubes and it essentially runs down and flushes it out – pulling it right out of the airstream,.” he says.

Out of the air lock, the fibre drops into hammermills; another high-risk area that is closely monitored. The hammermills pulverize the fibre into a uniform size before it enters the plant.

Inside the plant
Walking in the doors, it’s remarkable how clean the facility is – a lot of time, money and thought was put into developing a system that would ensure the air and surfaces are free of dust. An industrial vacuum system runs around the clock to pull the ambient dust out of the air, but it also takes a crew entrusted with the job of keeping the place clean by manually sweeping the mill.

“We produce dust so we’ve got to be all over it,” Bennett says.

The plant has 10 pellet mills, three of which are older (the company is in the process of replacing all of the mills with new Andritz pelletizers). The pellets drop from the pellet mills into the coolers. Half the pellet mills have their own individual coolers, while the other half share a large one. Once cooled, they are shaken to remove the fines and are then loaded into the silos or directly into the rail cars during day shift.

Watchful eyes
John Gillis is the operator at the helm when Canadian Biomass visits the plant. He’s able to monitor the flow of fibre and the spark detection systems that have been strategically placed throughout the process.

Gillis points out the 40 zones of extinguishment on his screens. “We’ve got 29 GreCons all over the plant. If there’s a spark, some of them will shut down the whole plant, some will take down parts of it,” he says.

Flamex is another system the operator relies on that uses infrared detection. It works well on hot metal and is therefore used for the coolers. A Firefly system is used in the cyclones. The trick is to customize the best control system for the risk point. Of course, the operator has a big red button that will take the whole place down, if necessary, Gillis says.

A quality control person monitors the finished product, looking at things like ash content and the individual particle size within the pellet. Pure sawdust and shavings run about 0.4 per cent ash. Pacific BioEnergy is able to keep the ash content to below two per cent with the addition of quality bush grind, which can be as low as 0.8 per cent. Sand and rock can raise the ash content.

Pellets are conveyed into two silos for storage or directly into rail cars during day shift. The silos can fit 3,500 tonnes of pellets each seven-day production cycle. Its custom fleet of 165 railcars will hold 99.2 tonnes each – just below the 100-tonne limit. From Prince George, the rail cars are sent directly to the port where they are loaded for export.

Designed to be a versatile pellet producer, Pacific BioEnergy is well positioned for success in its pellet mill, but this isn’t the only way the company is preparing for the future. Stay tuned to learn more about the innovative methods it is using to secure the wood fibre it needs.