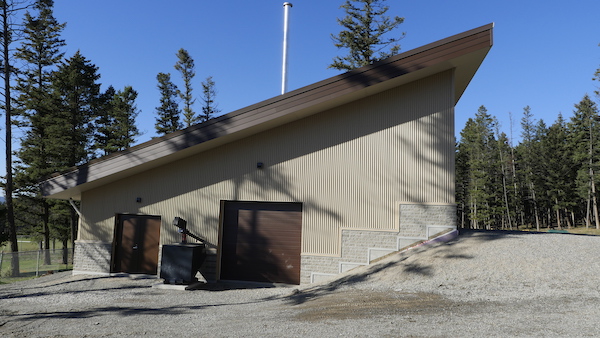 The boiler project required the construction of a separate building on the elementary school’s property. Photos courtesy B.C. Ministry of Environment and Climate Change Strategy.

Cataline Elementary, a school in Williams Lake, B.C., recently collaborated with a neighbouring Thompson Rivers University (TRU) for a mechanical upgrade and a new 400-kW biomass pellet boiler, which have reduced their energy costs for heating.

The elementary school’s own heating system was built in 1972. By 2013, with a cracked heat exchanger, it was inefficient, showing its age and becoming too costly to maintain and operate.

The school district’s manager of facilities and transportation, Alex Telford, identified the opportunity for a comprehensive upgrade. The district already had two pellet boilers in place at other facilities, which were saving about $40,000 per year in heating costs, but each took up more room than would be available at Cataline. So, the HVAC upgrade would require additional floor space.

The solution was to construct a separate building on Cataline’s property, with enough capacity for the pellet boiler, compact gas boilers, heat exchangers and fuel storage. This setup would offer economies of scale for heating not only Cataline, but also the adjacent E.J. Bare Education Centre and TRU, with each of these zones individually metered. 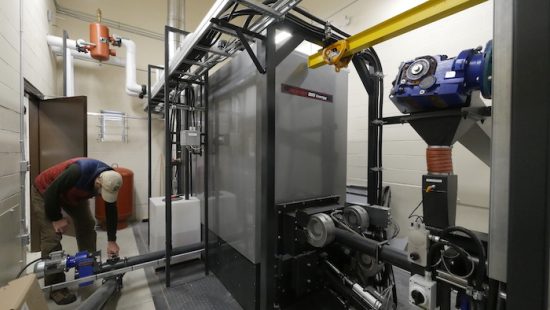 The overall cost was $1.7 million. The cost-sharing partnership made possible what would not have been feasible at a smaller scale.

The pellet boiler, at $416,000, was fully covered by Carbon Neutral Capital Program (CNCP) funding. TRU would pay for its maintenance. The pellets sourced for the boiler are made from local sawmill waste – in the winter, they are only delivered every two weeks, so the storage space is essential.

Rocky Point Engineering of Nanaimo, B.C., designed the system and oversaw implementation. Ventek Energy Systems of Kamloops, B.C., worked on the boiler with manufacturer Ariterm from 2015 to 2016, assembling it in Quesnel, B.C. The school district’s own maintenance team then handled the piping, electrical, plumbing, welding, mechanical work and final tie-in. The three buildings required 760 metres of insulated underground heating piping.

The upgrade continued through September 2016. Crews worked night shifts to minimize disruption for the new school year. The pellet boiler entered operations in October, in time for the onset of winter.

The project reduced the schools’ maintenance costs and improved classroom air quality and comfort. Total utilities costs were reduced by 48 per cent in 2016/2017 compared to 2014/2015. TRU’s heating costs dropped 15 per cent with no capital outlay. And the carbon tax savings for Cataline and TRU combined totalled $7,100.