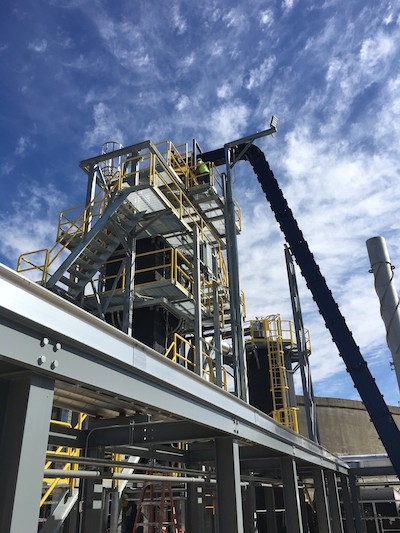 The company already holds eight patents in the biomass and biosolids gasification field – several of which were used to build the world’s largest downdraft gasifier last year in Lebanon, Tennessee.

The newly re-branded company has aggressively embraced a greater innovation role in the clean tech energy segment, adding personnel to its research and development department which is working to prove and commercialize new bio-based energy production technologies.

“Our company can help corporate America, governments, and academic institutions embrace sustainability and the global transition to renewable energy,” said Aries CEO Greg Bafalis. “Our downdraft and fluidized bed gasification projects have proven themselves viable with over 50,000 hours of commercial production. We stand ready to help these institutions meet their renewable energy, zero landfill waste, and emission reduction goals.”

Unlike older disposal systems that include a burning or incineration step, Aries Clean Energy’s downdraft gasification process uses a sustainable thermo-chemical process to produce a synthetic fuel gas – from a mixture that could include wood, scrap tires, and wastewater sludge – that can be used much like natural gas for thermal applications (e.g., boilers and kilns) and the production of electricity. The gasification process itself produces no emissions, ash, or odor. The only by-product is a high carbon biochar, much like charcoal. That material can be reused in agricultural and industrial applications.

This technology provides a more sustainable method of waste disposal, diverting a wide-range of biomass-based materials from landfills to use as feedstock for the gasification process. This results in less waste going to landfills, lower waste disposal costs, reduced emissions, and a smaller carbon footprint.

In 2016, Aries Clean Energy completed construction on the world’s largest downdraft gasifier in Lebanon, Tennessee, with a throughput capacity of 64 tons per day, five times greater than previous installations. The system will divert over 8,000 tons of material from landfills each year and will produce 36,000MW-hrs of electricity over 20 years.

“This [Lebanon] facility is going to be a model for waste-to-energy partnerships as well as the first stage in moving our city completely away from dumping waste into landfills,” said Philip Craighead, Mayor of Lebanon, Tennessee (2008-2016).

In its early years as PHG Energy, the company installed 12 gasifiers at brick manufacturing plants in the Southeast – providing synthetic gas from biomass sources for use in kilns. When the Great Recession hit the building industry in 2010, brick production halted and the price of natural gas plummeted. At that point, Aries Clean Energy began to look at deploying its technology with businesses and municipalities to reduce emissions and landfill waste, create green power, and seek new opportunities to spark its R&D efforts.

Aries Clean Energy first demonstrated its ability to produce renewable electric power in 2011, using its gasification technology to convert wood chips into synthetic gas that was further cleaned and used to run a 1-MW Caterpillar generator. The electricity was sold back to the grid as part of the Tennessee Valley Authority’s Generation Partners Program.

The company also collaborated with GE Power & Water to merge its downdraft gasification technology with GE’s Clean Cycle ORC (Organic Rankine Cycle) generator to create an integrated waste-to-energy technology that is operational at the current R&D plant in Covington, Tennessee.

The company’s R&D division also developed and patented a solution for reducing the heavy tar content of biomass-based fuels. The process involves filtering synthetic gas through high-carbon biochar and removing impurities using microwave-induced plasma fields. This effort has moved from laboratory to field-testing at one of Aries Clean Energy’s R&D biomass facilities and is showing success in producing cleaner synthetic fuel gas, as well as lower capital and operations and management costs.

“Putting these clean and sustainable energy innovations to work in more locations, and bringing some of our latest research and development efforts to the marketplace this year, are going to be exciting for our company and for the industry,” added Bafalis.

Aries Clean Energy, LLC, based in Nashville, Tennessee, designs and builds innovative bio-based downdraft and fluidized bed gasification systems using its eight patents granted to date. Its projects provide for the sustainable disposal of waste, reduction of carbon emissions, and the production of clean thermal and electrical energy. The company’s ongoing R&D efforts are focused on cleaning syngas produced from waste for use in internal combustion engines. A solar division designs and implements commercial and community scale photovoltaic facilities. www.ariescleanenergy.com