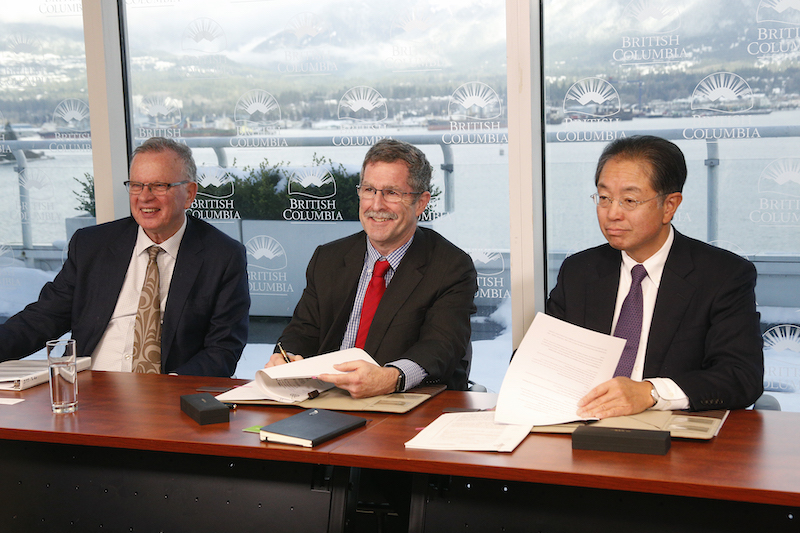 From right: President of NYK Bulk and Projects Carriers, Moyoyuki Nose, and Pinnacle Renewable Energy’s CEO Rob McCurdy sign a long-term charter agreement for a newly-built Japanese vessel to transport Canadian wood pellets to Japan, in the presence of B.C.’s Minister of Jobs, Trade and Technology Bruce Ralston on Jan. 16.

“It’s certainly different to how freight has been arranged in the past by any wood pellet company anywhere,” said Vaughan Bassett, Pinnacle’s senior vice-president of sales and logistics. Bassett was the master of ceremony for the contract signing at B.C. Premier John Horgan’s office in Vancouver.

The S1130 Handy class vessel of almost 40,000 deadweight tonnage (dubbed the M/V New Pinnacle) will transport between 32,500 and 33,000 metric tons of wood pellets six times per year from Canada to Japan.

“It’s probably the first time that the wood pellet industry has grown to the point where it can utilize vessels such as these over a very, very extended period to run product between Canada and Japan,” Bassett said.

Japanese Consul General Takashi Hatori took part in the signing ceremony, as the deal was made possible by a long-term commitment from the Japanese government to purchase pellets from Pinnacle.

“The Japanese government set an ambitious goal of increasing the biomass power generation to make it 2.3 times by the year 2030,” Hatori said. He added that Canada, and in particular B.C., is “the most reliable partner to source wood pellets.” 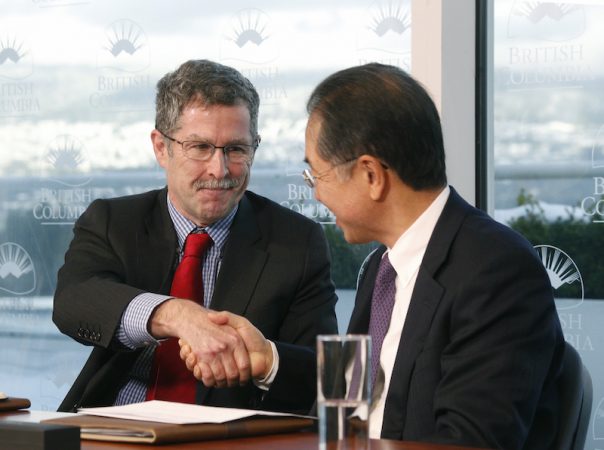 According to Bassett, this allowed for the unique transportation strategy, which Pinnacle expects to result in economic benefits for the company.

Unlike Contracts of Affreightment (COA) – which are typical in wood pellet exporting – where a shipping line agrees to carry a certain number of tons from one market to another, this long-term charter will see Pinnacle take on the costs of running the ship, said Bassett. However, that means the New Pinnacle can run exclusively between Canadian and Japanese ports without needing to travel to other ports to source other cargo. The vessel is also built to take the maximum possible load into Japanese ports.

“So, it’s maximized in every single way, and we expect to get some economic benefit out of that,” Bassett said.

In securing long-term contracts out of Japan, Pinnacle is in the enviable position of having long-term certainty at a time when the B.C. forest sector does not.

But Bassett did note that, in terms of securing enough supply for their contracts in Japan, “we could certainly build more pellet plants. And in order to do that, we would certainly like more access to more fibre.”

There is more fibre available in B.C., he said. “I’m thinking about things like forest residues, the stuff that’s left behind after harvesting, for example. We could use all that, and if it’s within economic reach of our plants, we should be able to access it and turn it into wood pellets. Currently there are problems with access.”

Bassett said Pinnacle is in talks with the B.C. government to facilitate better access where it makes sense to do so.

“With that, we would add a lot of capacity right here in Canada,” he said. “We wouldn’t have to go down to other fibre baskets like in the U.S.” 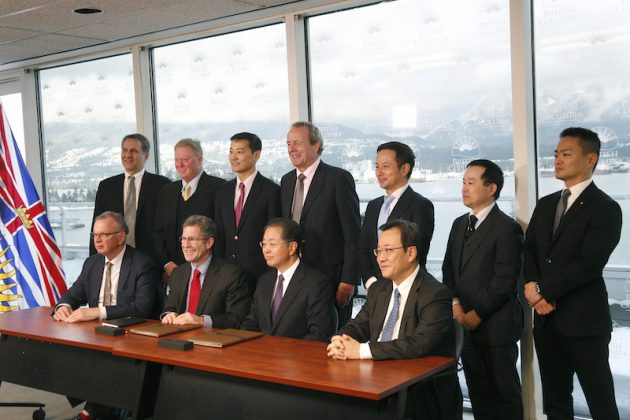 Attendees of the Pinnacle/NYK signing ceremony celebrate the contract signing at the Premier’s office in Vancouver on Thursday, Jan. 16. From bottom left: B.C. minister of jobs, trade and technology Bruce Ralston; CEO of Pinnacle Renewable Energy Rob McCurdy; President of NYK Bulk and Projects Carriers, Moyoyuki Nose; Japanese Consul General Takashi Hatori and other members of their staff, in addition to members of Vancouver Shipinvest and Management Ltd.

Currently, Pinnacle operates eight industrial wood pellet production facilities in western Canada (seven in B.C. and one in Alberta) and one in Alabama. The company has also partnered with Tolko to build a new plant in Alberta, and a second plant is under construction in Alabama. Pinnacle also owns a port terminal in Prince Rupert, B.C.

Bruce Ralston, B.C. minister of jobs, trade and technology, also spoke at the ceremony, noting that the wood pellet industry is proving itself to be an important part of the B.C. forestry industry, and a growing one.

“The broad statistics are 50 per cent [growth] over the last five years, and I think the growth of Pinnacle really reflects that,” he said.

“Here in British Columbia, forestry is one of our foundational industries, a pivotal one,” he added. “And notwithstanding some of the recent downturn in some parts of the industry, we envision a strong future for forestry products and services here in British Columbia, and certainly Pinnacle will be one of the key suppliers as we look for clean energy, low carbon solutions in the future as we as a government nationally try to achieve our Paris commitment.”

In an email, Pinnacle said the New Pinnacle is expected to be the first of a couple of vessels it plans to charter long-term.