Nov. 15, 2016 - Washington state-based Alaska Airlines made history yesterday flying the first commercial flight using the world’s first renewable, alternative jet fuel made from forest residuals, the limbs and branches that remain after the harvesting of managed forests. The alternative jet fuel was produced through the efforts of the Washington State University-led Northwest Advanced Renewables Alliance (NARA). 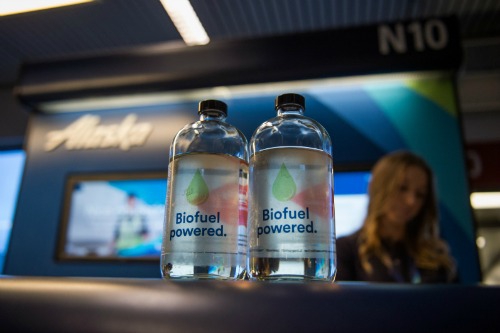 The demonstration flight departed Seattle-Tacoma International Airport earlier yesterday morning for Reagan National Airport in Washington, D.C. The flight was fueled with a 20 per cent blend of sustainable aviation biofuel, which is chemically indistinguishable from regular jet A fuel. The flight, the first commercial passenger flight of its kind, continues to advance viable alternatives to conventional fossil fuels for aviation.

“This latest milestone in Alaska’s efforts to promote sustainable biofuels is especially exciting since it is uniquely sourced from the forest residuals in the Pacific Northwest,” said Joe Sprague, Alaska Airlines’ senior vice president of communications and external relations. “NARA’s accomplishments and the investment of the U.S. Department of Agriculture provide another key in helping Alaska Airlines and the aviation industry reduce its carbon footprint and dependency on fossil fuels.”

While the 1,080 gallons of biofuel used on the flight has a minimal impact to Alaska Airlines’ overall greenhouse gas emissions, if the airline were able to replace 20 per cent of its entire fuel supply at Sea-Tac Airport, it would reduce greenhouse gas emissions by about 142,000 metric tons of CO2. This is equivalent to taking approximately 30,000 passenger vehicles off the road for one year.

NARA is a five-year project that launched in 2011 and is comprised of 32 member organizations from industry, academia and government laboratories. Today’s flight represents its efforts to develop alternative jet fuel derived from post-harvest forestry material that is often burned after timber harvest. The forest residual feedstock used to power Alaska Airlines Flight 4 was sourced from tribal lands and private forestry operations in the Pacific Northwest. In addition to producing 1,080 gallons of biofuel used for the flight, other key tasks of the project included evaluating the economic, environmental, and societal benefits and impacts associated with harvesting unused forest residuals for biofuel production.

The NARA initiative was made possible by a US$39.6 million grant from the National Institute of Food and Agriculture (NIFA) to support research on biofuels and biochemicals, foster regional supply chain coalitions, empower rural economic development and educate the public on the benefits of bioenergy.

“Today is a tribute to all of our NARA partners, and especially to NIFA who supported our mission to facilitate the revolutionary development of biojet and bioproduct industries in the Pacific Northwest using forest residuals that would otherwise become waste products,” said Ralph Cavalieri, NARA executive director. “We are proud of every one of the partners and stakeholders – from forest managers to Gevo and Alaska Airlines – who have laid the foundations for a renewable fuel economy that will keep skies clear and healthy with the potential to bolster economically challenged timber-based rural communities in our region.”

Gevo, Inc., a NARA partner, successfully adapted its patented technologies to convert cellulosic sugars derived from wood waste into renewable isobutanol, which was then further converted into Gevo’s Alcohol-to-Jet (ATJ) fuel. Believed to be the world’s first alternative jet fuel produced from wood, the fuel meets international ASTM standards, allowing it to be used safely for today’s commercial flight.

“This first of its kind flight demonstrates Gevo’s commitment and ability to convert a wide range of sugar feedstocks into drop-in renewable fuels. We are pleased that we had the opportunity to prove, through the NARA project, that cellulosic sugars from wood can be used to successfully make commercial jet fuel. We congratulate all of our fellow NARA partners and thank the USDA-NIFA, for its unwavering support in the pursuit of renewable jet fuel. I also thank Alaska Airlines, who continues to be a great partner,” said Pat Gruber, Gevo’s Chief Executive Officer.

“I am proud to see the world’s first biojet fuel made from forest residuals being flown on an Alaska Airlines airplane,” said U.S. Senator Patty Murray. “The Pacific Northwest continues to be on the cutting edge of new technology that will make airplanes better, safer, and more efficient, and I’m thrilled that so many stakeholders came together and that Washington State University has led this important effort.”

“Today’s flight comes after years of investments to help the aviation biofuels industry take off,” said U.S. Senator Cantwell. “By creating these sustainable biofuels, we will revitalize our rural agricultural communities, foster economic growth, reduce greenhouse gas emissions, and cut our dependence on foreign oil while growing our competitiveness in global markets.”

“Today’s flight demonstrates that Washington state’s innovation economy is once again at the forefront of collaborative, transformative research by using material that would otherwise be discarded to create a new biofuel,” said U.S. Congresswoman Suzan DelBene. “Here in the Pacific Northwest, we know that the natural environment that surrounds us is what makes living here so special. We have a tremendous opportunity in our region to build a new green economy and find innovative solutions to address climate change for our health and future generations, as this project highlights.”