It takes a lot of work to go platinum, just ask the Okanagan Pellet Company in West Kelowna, B.C. Acquired from Westwood Fibre by Viridis Energy in 2010, the 65,000 sq. ft. pellet plant manufactures some of North America’s highest-quality wood pellets for light industrial and residential use. 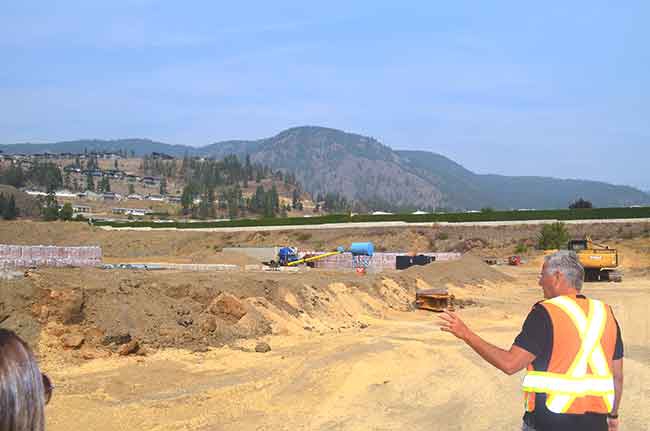 Chris Robertson It takes a lot of work to go platinum

“We consider OPC to have one of the best pellets on the market,” says Chris Robertson, director, CEO and founder of Viridis Energy.

The reason they have one of the world’s best pellets? Simple. It’s the fibre.

“The fibre we get here is purely softwood sawdust and shavings, we don’t have any green wood. That’s why we have such a premium product,” says Renata Bellentani, sales and logistics manager for Viridis Energy.

The majority of the OPC’s 60,000 tons of pellets produced annually are destined for the U.S. with the balance going to customers in Canada, the U.K., Italy and South Korea.

Viridis Energy recently announced a three-phase plan to double the facility’s production over the next two years with a total investment ranging between $4 million and $5 million.

“The whole concept was to take this opportunity now and find what this plant needs to take it to the next level,” Bellentani says. “For us to increase our reach into the market, we want to have more of our own product. And we have access to the fibre so it’s a no-brainer for us.”

The company has secured long-term deals with suppliers of fibre and high-quality wood pellets to ensure OPC’s customers never experience a shortage, through its subsidiary Viridis Merchants (VMI).

VMI serves as an aggregation and trading service of wood pellets and other alternative energy sources. It also offers smaller producers services such as logistics management through its fleet of leased rail cars.

Phase 1
The first phase of the upgrades is the separation of the facility’s two production lines, which were running simultaneously – the wood pellet press and a manufacturing line that converts shavings into high-end horse bedding.

This phase is now complete and came in under the budgeted $1 million.

“This plant is sort of unique in that it has two lines: a horse bedding line on one side and the pellet side on the other, two entirely separate businesses,” Robertson explains. “What we did was break those two manufacturing sides apart. The reason we did that was so if either line breaks down, we’ve still got the other line up and running.”

The OPC plant upgrades are also designed to address new regulatory requirements for safe storage and management of wood pellets and to ensure the plant complies with the National Fire Protection Association and B.C. Fire Safety codes.

One of the upgrades installed in late September to help OPC meet these requirements was a 12,000-sq.-ft. tent built for outdoor fibre storage, which was part of the company’s efforts to decommission a barn that was previously being used to store the fibre.

“Everything will be stored in a separate building now,” Robertson says. “One of our problems we had here was having a raw product room right beside our manufacturing building.”

The tent for housing the sawmill residuals was designed by Spanmaster Structures. It is constructed out of galvanized steel and a fire-resistant fabric. The tent has the capacity to house between 300 and 400 metric tonnes of dry fibre, which is approximately five days worth of production.

During the separation of the lines, the company also installed a new dust containment system designed and built by Allied Blower.

“Safety has become a clear focus in this industry,” Robertson says.

In addition to the new dust system, OPC has hired a safety company called Free Spirit Ventures, who developed OPC’s new safety manuals and procedures and trained all of the company’s staff.

The training is part of a safety initiative Viridis Energy started up called “Empower.”

“It’s all about safety and procedures,” Robertson says. “While we’re doing the retrofit, we’re taking the time to train our staff on the importance of safety in this business because we are manufacturing fuel. We want to become the leaders in this industry. We want to create a roadmap for safety.”

With the upgrades taking place, the timing couldn’t have been better for training staff.

Phase 2
The second phase of the upgrades will involve the restructuring of the pellet side of the facility.

During this phase, the tube system used to transfer the fibre into the manufacturing building will be moved into the new, semi-permanent tent structure outside, and the current storage building will be decommissioned. The emphasis will be on ensuring the placement of equipment is modified for optimal efficiency and safety. The engineering company hired is Williams Engineering. The lead on the project will be George Hutchinson who is known in B.C. for his knowledge of combustible dust management and safety.

This phase will cost approximately $1 million to complete.

Phase 3
The third and final phase of the project will involve the installation of the second press and a state-of-the-art dryer, which will cost approximately $3 million. This phase will begin in the latter half of 2016. This phase will increase the plant’s capacity by 50 per cent.

Shortfalls covered
Viridis expects OPC to have a production shortfall of approximately 10,000 tons of pellet production. However, it is not expected to have a significant impact on sales, since the company can cover its wood pellet delivery obligations through a combination of existing inventory and additional product acquisition through VMI. This situation underscores the value of having VMI’s supply of pellets.

The new pellet process
Once the upgrades are complete, the sawdust will be taken from the new storage tent over to a storage bin via the company’s Volvo L60E wheel loader. The sawdust is then transferred via the Allied Blower vacuum tube transfer conveyor system that carries the materials up an outer wall of the main building into the manufacturing facility where it is placed on screens. The tube transfer system was chosen over a traditional conveyor system in an effort to avoid having the dust particles build up inside the facility.

The sawdust then gets transferred on to a belt dryer that operates at a low temperature to perform the necessary drying of the fibre.

“Our fibre is so white because we use a low temperature drying system. We are able to do this because the fibre comes in at such a low moisture level as it is,” Robertson explains.

The sawdust is then refined further in a Roskamp Champion hammer mill and is sent to two Andritz Sprout 400 horsepower ring die pellet presses. As the wood pellets are pushed out of the die they are cut off to ensure that the pellet length meets OPC’s specifications, and are sent to a Law-Marot-Milpro (LMM) pellet cooler to extract the heat and moisture.

A fully automated Hamer bagging system then bags the pellets, which are then stacked on pallets with 50 to 75 bags per pallet using a semi-automated process. The skids are then double-shrink-wrapped and capped using an automated wrapping machine and are either placed in the warehouse or the outside shipping yard for future transport.

The pellets are transported via truck to railcars in Kamloops, B.C. OPC currently have a fleet of 80 rail cars at their disposal, riding the rails throughout Canada and the U.S.

New England is the company’s largest consumer of its residential wood pellets.

“We service upper New England out of Quebec,” Robertson says.

A safe investment
Once the upgrades are complete, OPC will have doubled its pellet production, improved efficiencies on both the pellet and bed shavings sides of its business and implemented new safety procedures and created an improved culture of safety within the workplace.

“Besides the upgrades we’re doing, the new safety culture we have created throughout this process is something we’re really excited about,” Robertson says. “Long-term, we think it will take a lot of pressure off of us because we’re doing it the right way.”