June 6, 2015 - With the recession slowly fading into the rearview and forest companies looking for ways to make up for lost and disappearing revenues, Conifex found itself investing in new assets, rather than divesting assets, in order to replace disappearing or lost revenue streams. 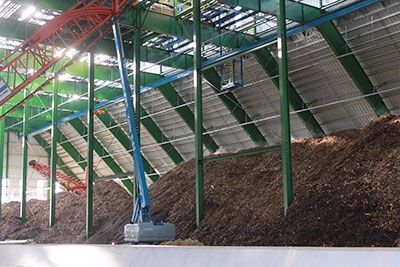 One of the objectives of the new bioenergy facility is to maximize the value of the fuel coming in from the sawmill. With the recession slowly fading into the rearview and forest companies looking for ways to make up for lost and disappearing revenues

In March of 2010, Conifex announced that it was purchasing assets from Abitibi in the Mackenzie area, which included two sawmills, two planer mills and a forestry licence with an annual allowable cut (AAC) of 932,500 cubic metres. Those assets increased Conifex’s sawmill capacity to 600mbft annually, and an AAC of 1.6 million cubic metres.

Around the same time, BC Hydro was continuing its search for additional sources of electricity to provide power for growing residential and commercial demand in communities throughout the central and northern parts of the province. In the few years prior, the Fort St. John generating station was running at capacity with immediate need for new electrical capacity in the region, and the province was putting itself into a position to buy power from other provinces, states and stakeholders.

Within that BC Hydro laid an opportunity for companies like Conifex looking to diversify its assets.

In the 12 months that followed the Abitibi purchase, Conifex finished its plans to convert one if its Mackenzie assets, a then-idled pulp and paper mill, into a cogen system that could provide power to the grid. Conifex entered into an agreement with Dresser-Rand Canada Inc. to manufacture a 36MW steam turbine generation set that would produce approximately 230GWh of net energy per year.

At the time of the announcement, Conifex president and chairman Ken Shields made it clear that the construction of the cogen facility would help to provide more stability in the fluctuating wood markets that followed the recession.

“The development of bioenergy in conjunction with our traditional operations will diversify existing revenue sources, counteract some of the volatility inherent in the commodity lumber sector, and provide additional stable employment opportunities within the community of Mackenzie.”

The announced plan came before a power agreement had been signed with BC Hydro, but the quality of the Conifex plan, combined with the region the power project would supply, made it clear that the project would gain approval from the province’s power producer. In June of 2011, the Electricity Purchase Agreement and related Load Displacement Agreement (LDA) was completed between Conifex Power Limited Partnership, a wholly-owned subsidiary of Conifex, and BC Hydro. Then in April of 2012, the B.C. Utilities Commission (BCUC) approved the EPA for a minimum of 200GWh of electrical energy annually on a 20-year agreement. The expected net of 230GWh would provide enough power for 24,000 homes.

In November of that year, Conifex hit a stumbling block that threatened to derail the completion of the plant. With costs creeping towards the $100 million mark, the company had to suspend its construction plans while it looked to secure long-term financing for the bioenergy plant. At the time, the project was approximately 30 per cent complete, however negotiations with an equity partner had fallen apart. It took 10 months, but the company finally secured long-term financing valued at $102.7 million thanks to an agreement with a syndicate of four institutional leaders led by a Canadian chartered bank.

Transitioning the plant
The Conifex team began the bioenergy project with two objectives in mind according to Tony Madia, senior vice-president of operations for Conifex Timber.

“Treat fuel like fuel – maximize the value of the fuel that is coming from the sawmill. And we wanted to utilize as much of the equipment as possible, using existing infrastructure if and where possible.”

The Conifex team was able to use the existing boiler and boiler bed combustion system already in place in the pulp and paper mill, and build in the rest of the components around those pieces. The removal of the other pieces of existing pulp and paper mill equipment, the first phase of the construction project, took approximately 8-10 months to remove. The removal of the equipment allowed the company to then focus on putting all of the elements in place to produce an efficient and effective system for turning residues into power.

At the start of the process, the trucks dump fuel through the Keith reclaimer system. Both the trucks and the floors have walking bed designs, allowing the efficient unloading of fuel from the trucks in just seven minutes. The fuel is dumped through the floor into the auger, where the fibre is reclaimed and processed into the shredder. The shredded material is then pneumatically conveyed, blown through the blower and feeder up into the silos. The silos are part of the infrastructure already onsite that has been utilized for the bioenergy system, as the silos were previously used for pulp storage. Now, fitted with baffles and dampers for explosion prevention and a dust collection system at the top of each one, the silos are used to provide 80,000-90,000ft.3 of storage capacity for the cogen facility, which represents approximately three-to-four days worth of fuel.

At the bottom of each of the silos, a reclaiming auger processes the fibre onto an S conveyor that conveys the material to the hammermills. The hammermills then pulverize the fuel, which is then ready for combustion in the boiler.

The cyclonic burners in the boiler use a combination of pilot fuel and oxygen that reacts with the blown in biomass. At the bottom of the boiler is a bubbling, fluidized bed system using sand. Underfire air is blown up through the sand, turning the sand into something reminiscent of bubbling porridge as Madia described it during the tour of the facility. The hog fuel is dumped and mixes with the sand, heated at 1600°F which combusts the fuel instantaneously. The sand helps roll the combusted fuel through the boiler to the turbine.

The Dresser-Rand turbine system takes the high-pressure steam, which comes into the unit at 900°F and 950psi, through a valving inlet that controls steam volume at any given time. The steam is pushed through the turbine causing the entire turbine to spin. That process allows the extraction of all of the thermal energy, and produces a 60°C condensate water. The Brush generator at the end of the turbine produces the electricity.

To provide power to the grid, Confiex purchased a 40MVA (megavolt ampere) transformer to compliment a pair of 80MVA transformers already part of the infrastructure at the former paper mill.

The condenser takes the condensate and cools it on closed angle loops. The condensate is fed back to the boiler, which takes the water and converts it to super-heated steam (super heated refers to steam at a higher temperature threshold than 100°C).

One of the objectives of the new bioenergy facility is to maximize the value of the fuel coming in from the sawmill.

Becoming operational
The installation of the bioenergy system was not without its growing pains, especially when it came to testing and conditioning. Flow rates, and how they are affected by environmental conditions, was a steeper learning curve than originally anticipated.

Despite the challenge, the plant experienced initial success during its first test, with the system running perfectly until power was lost to the lubrication skid. A 1000psi lubricant is injected in-between the two shaft surfaces in the condenser to prevent the turbine shaft from touching the bearings. A hydraulic medium creates the clearance between the shaft and the bearings.

The resulting delay in October of 2014 caused the company to delay bringing the system online until this year.

Six months later, on April 24, Conifex successfully completed its 72-hour run test, which was confirmed by BC Hydro. That allows them to begin selling electricity under the EPA to BC Hydro as of May.

Once the bioenergy system is running at capacity, it is expected to generate upwards of $25 million per year from BC Hydro. That revenue, combined with stabilized markets for B.C. lumber products, should provide the diversified product streams necessary for Conifex to continue the profitable growth of the company, and cement itself as a key player in the B.C. forest industry.