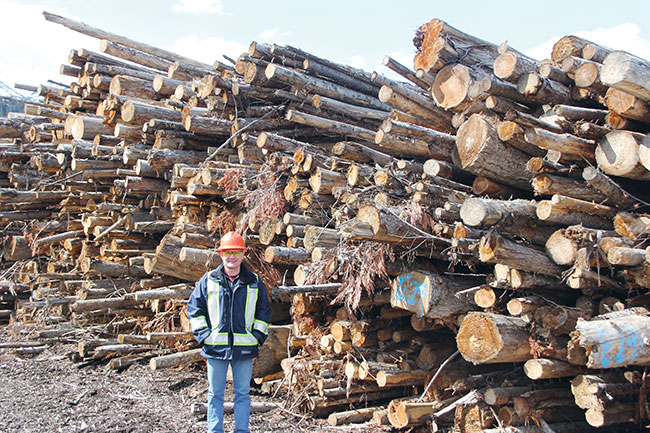 The concept of using wood waste to power generators is not a new one. In fact, Louisiana-Pacific (LP) Building Solutions’ facility in Golden, B.C., which produces value-added engineered wood products, has been using residuals from its operations to run a generator since the 1960s.

But, as the fibre supply in the province shrinks, the B.C. government has been pushing the forest industry to increase fibre utilization from logging operations and reduce the amount of slash pile burning. Consequently, the company has been looking for new ways to use trees to their fullest potential. In 2011, LP looked into the possibility of using wood waste leftover from their harvesting operations, but found it wasn’t economically viable at the time.

Then, in March 2020, they became aware of the Forest Enhancement Society of BC (FESBC), which provides funding for different fibre utilization projects. LP began considering applying for a grant to give their fibre utilization project another go, conducting an internal economic analysis and meeting with their harvesting contractors, log haulers and the local community to gauge their interest, explains Scott King, RPF, silviculture forester with LP.

“If we were going to do this, from the very beginning we had to have meetings with the log haulers, the operators who do all the cutting in the bush; we had to make sure we had all the trucking components taken care of. We had to meet to discuss what we could learn from the project in 2011 and how we could improve on it,” he explains.

They then submitted a proposal to FESBC, outlining how the company would take leftover wood waste from the bush to their facility, to be used in their Second World War-era generator to create electricity.

“There was an opportunity and a demand that we could assist with, and we were happy to assist them with getting this material to their facility,” Pratt says.

“At the end of the day, they can learn some efficiencies to expand their economic radius, so this can continue without funding going forward.”

In October 2020, the first loads of fibre from the bush began arriving at LP’s facility in Golden. The company then hired a contractor to grind the fibre in the plant’s log yard, using a CBI 5800BT horizontal wood grinder.

“We had to make sure we had enough fibre to make it economically viable for him, so we had about four months of wood in our log yard before he came in,” King explains. “He came in April 2021, took what we had and ground it all up for the powerhouse to use. The hog fuel produced has been a very good product for power generation.”

The fibre itself is especially clean, which King says is one of the benefits to hauling and grinding it themselves rather than sourcing it from someone else.

“When you’re getting fibre from somebody else, you’ve got to put in a quality check system because you never know if you’re going to get dirt or rock – it’s just the nature of the business,” he shares. “Whereas here, if we do it, everyone has a vested interest to make sure the quality is very, very good.”

This is because after the fibre is harvested and processed, it is loaded onto a logging truck, minimizing the amount of time the fibre can mix with the soil and become dirty. Once the log yard was empty, LP began building up their stockpile of fibre again.

“The beauty in that is that with the wildfires we had in B.C. last summer, we can control when the hog fuel is produced and thereby try to minimize the possibility that it is going to catch fire. It gives us a lot more control,” King says.

The fibre is used to power a generator that is nearly 80 years old. The generator still works remarkably well, and is “a labour of love,” King says.

“The engineers in the power plant told me the last time they took the generator apart, they did a bridge gauge reading, which measures how far the shaft has changed in relationship to its original position, and that bridge gauge reading had only changed by 0.01 of an inch in 80 years. It’s incredibly solid,” he adds.

With the funding provided by the FESBC, LP ultimately utilized 30,000 cubic metres of residual fibre to generate power – the equivalent of about 750 logging truck loads. 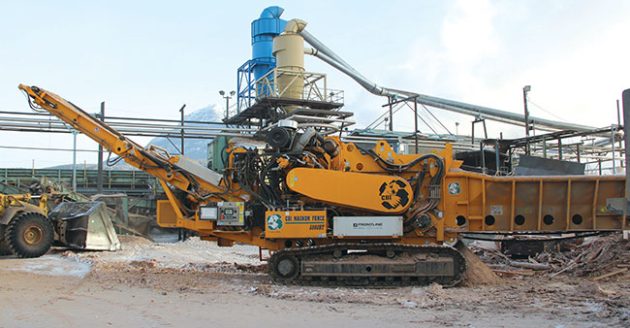 LP hired a contractor to grind the fibre in the plant’s log yard, using a CBI 5800BT horizontal wood grinder.

But, it wasn’t all smooth sailing. The company initially tried grinding the leftover fibre in the bush and transporting the wood chips to town using chip trucks, but they ran into some issues.

“When you live in the mountains like we do, roads go up and down the sides of the mountains, and chip trucks don’t have a lot of clearance, so it’s very difficult for them to travel on a lot of our roads,” King explains.

It was also difficult to get mechanics to the forest if equipment or trucks broke down. As well, the company was worried about the potential of sparking a wildfire while grinding in the bush.

Ultimately, moving their grinding operations to the plant made their operations more efficient and safer. However, this meant the company needed to get new truck configurations to haul shorter logs.

“That, obviously, meant co-operation, discussion and buy-in from our truckers and our loggers,” King says. “But, the response has been really positive.”

Beyond these logistical difficulties, King adds that it’s hard to make people see the benefits of hauling and grinding residual fibre to be used for electricity when it’s cheaper to burn it.

“It’s very challenging to compete with the cost of striking a match. If somebody is typically used to burning, and the economics of burning are cheap, then trying to incentivize other means – in this case, CO2 emissions, smoke and all of that – is always going to be a challenge,” he explains. “It’s thinking outside the box. It’s one of those things that’s as much an education program as anything else.”

Pratt agrees, noting that one of the biggest difficulties that FESBC has seen with all of their incremental haul projects is overcoming the mentality of “this is the way we’ve always done it.

“FESBC’s funding has allowed people to take the risk out of change and to try something different to achieve a common goal,” he says.

And the economic and environmental benefits outweigh the costs.

From an environmental standpoint, decreasing the amount of slash pile burning reduces the hazards associated with pile burning and improves the quality of the airshed. Burning the fibre in a generator is a cleaner, more controlled burn, since the generator has a scrubber that removes particulates from the air, King says.

Additionally, when slash pile burning is done, venting and indexes – automatic readings produced by Environment Canada – must be followed. According to King, these readings can sometimes be wrong. Grinding the residual fibre instead of burning it also reduces human or computer error.

These types of fibre utilization projects also help to reduce the wildfire risk, which is a big plus for the community.

“What happened in Lytton was devastating, and we don’t want that to happen here,” King says. “So, people are very much on board, and if we can do this, then that is also a huge feather in our cap. When we talk to the B.C. government Wildfire Branch, they’ve always reminded us that you’re going to get smoke – it’s just a matter of how you choose when you’re going to get it. This is one of the few ways that we can control it by putting it through scrubbers and a burner to create electricity and utilize it.”

Economically, hauling and grinding the fibre allows LP to secure their fibre supply in a different way, which gives the plant more options to stay viable, King explains.

“The pressures of a shrinking fibre source will always be there,” he says. “This increases utilization better, which is also viewed quite positively. And then, of course, there are all the jobs that are associated with this.”

As such, LP has seen a lot of community buy-in from local politicians and the forest industry. Moving forward, King says LP will continue to look at ways to increase their fibre utilization.

“The whole idea of the FESBC funding was to provide seed money so you could try projects like this and see if there was a different way of making something work and helping to streamline the efficiencies, so that when the funding stops, you’re able to learn from all of this and continue on,” he explains.

Some of the FESBC funding also helped LP test a “proof of concept” project using logs from the Kinbasket Lake (a reservoir created by the Mica Dam) to power their generator. This project was in partnership with BC Hydro, which runs the reservoir.

“Annually, through the raising and lowering of the reservoir as power is used, BC Hydro will collect 20,000-40,000 cubic metres of wood floating on the south end of the reservoir, and then they would burn it,” King says. “Our provincial government has made it well-known that they want to reduce the amount of slash pile burning in the province. So, we thought that we should talk to BC Hydro about the burning and see if we can’t come up with an alternative solution.”

According to King, various companies in the area have tried to do different projects, such as manufacturing different wood products with logs from the lake. But the logs were full of silt, making them difficult to process and therefore uneconomical for the companies.

“So, what we had to do was figure out a way to try and limit that dirt, to see if we could burn it,” King says.

The company decided to try pulling the logs straight out of the reservoir and onto a truck, to limit the amount of time the wood comes into contact with soil on the bottom of the reservoir or the beach. They then put the wood through a merchandizer, and measured the moisture of the wood.

“It actually ended up burning quite well, and I learned a few things, personally, about the fact that once wood dries out, it doesn’t stay saturated – it can produce a fair amount of heat,” King says. “It was a really interesting project, but it’s BC Hydro’s fibre and ultimately something BC Hydro has to take care of. The point we wanted to make is that it can be utilized.”