May 1, 2017 - Researchers in Guelph, Ont., an hour’s drive west of Toronto, are hoping to mine the money out of sewage with a new technology that maximizes anaerobic digestion at wastewater treatment plants. 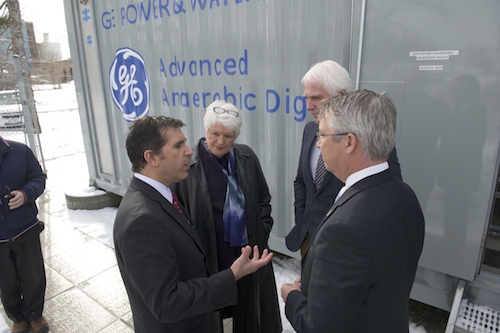 The project is led by GE Water and Process Technologies with partnership from universities and funding from the federal and provincial governments and the Southern Ontario Water Consortium (SOWC). On trial is a new technology that can triple biogas production from existing digesters at wastewater treatment plants and creates pathogen-free biosolids.

Michael Theodoulou, senior product manager of AD technology with GE Water and Process Technologies, says the technology will allow municipalities to not only produce and sell more biogas, but market their biosolids, thereby turning their wastewater treatment facilities into cash generators.

“There’s a much greater market value if biosolids are pathogen free so there is definitely an opportunity there for this technology to be marketed as a revenue-generating product,” Theodoulou says.

Testing of the new tech is happening at the SOWC wastewater pilot facility, which was built in partnership with the SOWC and the City of Guelph and is located adjacent to the municipal wastewater treatment plant.

“At that facility they have access to all streams of the wastewater plant, anything from raw sewage to primary sludge as well as secondary sludge, so it’s an ideal place to consolidate testing of new technologies,” Theodoulou says.

GE’s stake in anaerobic digestion began in 2014 with the company’s acquisition of U.K. based-company Monsal Ltd. With that acquisition came an innovative solution to maximize the efficiency of anaerobic digesters that GE calls Biological Hydrolysis.

“The technology of biological hydrolysis had only ever been applied in the U.K. market. While it’s proven technology, there are challenges to applying that technology globally and meeting the stringent regulations that are applied in municipal wastewater treatment of sewage sludge,” Theodoulou says.

In late 2015 GE launched a development program to globalize the tech. In 2016 GE researchers conducted lab trials and studies to prove the project’s feasibility for the marketplace. And in January 2017 a full demonstration project was announced with researchers from the University of Guelph and McMaster University taking part at various stages.

“We needed to increase the size, scale and application of the solution,” Theodoulou says. “The end goal is to maintain the benefit of biological hydrolysis that can triple the capacity of an existing anaerobic digestion system and combine that with producing a Class A biosolid at the end of the overall process.”

Typical anaerobic digestion happens all in one tank: hydrolysis, acidogenesis, acetogenesis and finally methanogenesis. “When it comes to municipal wastewater treatment, putting everything one tank limits the rate of the process in which you can digest, recognizing that hydrolysis is the rate limiting step. It’s like taking a peel off an orange,” Theodoulou says.

GE’s biological hydrolysis takes the hydrolysis and acidification steps out of the tank and moves them up the process chain, allowing these steps to occur in optimal conditions. Once the sludge has passed through the biological hydrolysis stage, it enters the tank where it performs methanogenesis to create methane. Thus more biogas is produced per tank.

“It really is an enabling technology to put more sludge through the digester,” Theodoulou says.

The other goal of the project is to create pathogen-free biosolids, which requires subjecting the sludge to a particular temperature over time. “There are growing restrictions globally for biosolids that are not treated to the equivalent of Class A standards,” Theodoulou says.

“We are adjusting the biological hydrolysis process conditions so that not only do we get that acceleration of the digestion rate but also to make sure that all of the pathogens are nullified and the biosolids are free of those,” he says.

The technology is applied as a retrofit to existing anaerobic digesters. A six-tank reactor system is placed upstream of the digester tank in the process line, with a total retention time of two to three days.

At the pilot plant in Guelph GE researchers have applied the biological hydrolysis tech and are looking to cut the retention time of sludge in the test digester in half. “With the first results from our trials we’re showing that the efficiencies of the digesters at the wastewater plant could be increased twofold,” Theodoulou says.

An increase in biogas production could potentially lead to a waste treatment facility offsetting the energy it requires to run, either by converting biogas to electricity and heat or upgrading it to renewable natural gas.

Beyond the revenue opportunities of increased biogas yields and the production of Class A biosolids, the biological hydrolysis technology also means municipalities will be able to handle population and industry growth without building new wastewater treatment infrastructure. As urban centres grow across Canada, the demand on existing wastewater treatment facilities will only increase.

“Based on our estimates, when you apply biological hydrolysis in comparison to building a new digestion infrastructure, you’re going to save over 40 per cent,” Theodoulou says.

Once GE’s technology is in place in a facility, the freed up tank space can then be used to co-digest other organic waste streams such as residential and industrial food waste that would otherwise go to a landfill.

Theodoulou says he’s confident that once the biological hydrolysis technology is past the demonstration phase it will be ready for commercial application. That could be as early as next year.

“What I see is the biggest challenge of the scale up is finding an early adopter,” Theodoulou says. “For North America anyway, this is a new technology and we are going to be selling this into the municipal marketplace which is relatively conservative. Finding a wastewater plant that is willing to be that first full-scale installation is the biggest challenge I see in terms of the rollout and showing its viability at full scale.”

By end of the year, he says, the research project at the demonstration plant will be completed to allow GE to take the technology to market.

It remains to be seen if a Canadian municipality will be first in line to turn their refuse into revenues.