June 27, 2016 - Garret Munch radiates enthusiasm – especially when he gets a chance to talk about his passion: clean energy. “You have to admit,” says the University of Manitoba (UofM) graduate student, as though anticipating an objection, “biofuels are cool.” 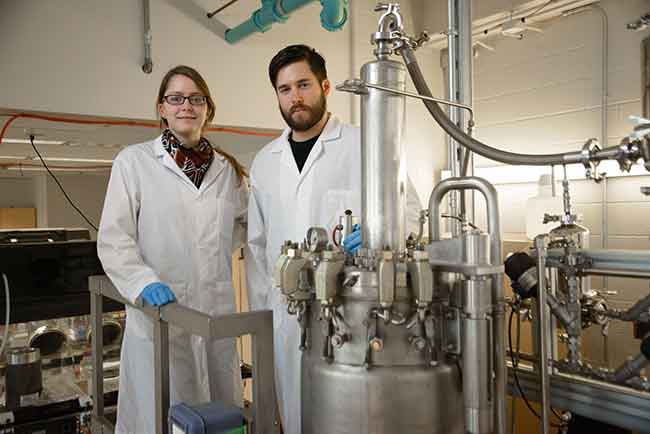 When Munch began working on his master’s degree in engineering, he had his sights set on producing biodiesel. Fresh from an undergraduate degree in biochemistry, “I was eager to apply my science background to the real world,” he says. The idea of using vegetable sources of biodiesel quickly caught his fancy. “I was convinced it was the greatest idea since flux capacitators,” he recalls. “This was the future, and I was going to be part of it!” His enthusiasm ran into the hard wall of reality when he read this sentence: Increasing demand for vegetable-based biodiesel has caused an increase in food prices worldwide. “I decided I didn’t want to contribute to the problem,” he says.

Munch wasn’t about to give up on his dream, though; he just had to find a different way to grow his biodiesel. Enter a little-known yeast strain called rhodosporidium diobovatum. “Another student in my lab group had published a paper on the ability of different yeast strains to produce the fatty acids that serve as precursors to biofuels,” Munch says. “It turns out the diobovatum was one of the high producers.”

The hard-working yeast strain also intrigued Munch’s project supervisor, UofM engineering professor Nazim Cicek. Munch wasted no time putting the strain to the test in Cicek’s lab. He soon found it had star quality: not only did it grow very fast and produce fatty acids in abundance, but it could metabolize a number of different carbon sources, one of them the glycerol recovered – ironically enough – from the sludge left over after producing biodiesel from vegetable oil.

Munch had proven the strain’s worth in a laboratory flask. But what kind of yield would it produce on a larger scale? In bottom-line terms, “We wanted to scale up the process to find out if it had commercial potential,” Cicek says. “I also thought it would be useful for Munch to learn what post-treatment looks like.”

Munch knew just where to turn. Some months earlier, he had attended a BioFuelNet annual general meeting where he met a student of Lars Rehmann, an assistant professor of chemical and biochemical engineering at the Western University in London, Ont. As the two grad students chatted about their respective projects, Munch learned that Rehmann’s chief interest lay in optimizing bioreactor performance. As such, he had the equipment and expertise to pilot-test Munch’s bioprocess on a larger scale.

Training the future
This led to Munch to apply for a BioFuelNet exchange grant, which funded an eight-week stint in Rehmann’s lab. Such grants are an integral part of BioFuelNet’s ongoing education and training program. The program helps train and launch a large number of young professionals, dubbed Highly Qualified Personnel, who will develop the Canadian biofuels industry to its full extent.

Specifically, the program provides R&D training, professional skills training, career development and networking opportunities, and funding for R&D initiatives within the academic, public and private sectors in Canada and beyond.

Student exchanges such as the one that brought Munch and Rehmann together seek to strengthen interactions within the BioFuelNet community, transfer knowledge between labs, expose young professionals to different problem-solving approaches, and strengthen Canada’s exposure to the international biofuels scene.

The exchange bore ample fruit for Munch. Drawing on Rehmann’s experience and research facilities, he was able up his production scale to a 100-L pilot-scale reactor system. He breathed a sigh of relief when his yeast came through with flying colours. “Thanks to my BioFuelNet connections, I’ll be able to go even bigger,” he says.

Back to the drawing board
As it happens, “going bigger” isn’t as simple as using larger quantities of starting materials. “A process can be straightforward when you’re working with just a litre, but as the system gets larger, the surface area-to-volume ratio changes, which makes it more challenging to get oxygen into the system,” Rehmann explains. What’s more, “using a larger impeller [the rotating component of a centrifugal pump] increases the shear stress on the yeast, which can lead to cell breakdown.” In other words, it’s not a given that a procedure that works in a beaker will also work in a bioreactor. “That’s why it’s important to take small ideas and move them up to a semi-industrial scale,” Rehmann says.

The final step will be to determine whether the process has economic legs. “This will depend on several factors, including the price of fossil fuels and the availability of industrial partners,” Rehmann notes. The research group eventually plans to expand the project to include other sources of waste to feed the yeast. Ideally, “we can eventually link up with a biofuel production company that generates the waste we use as fuel,” Cicek says – a win-win scenario if ever there was one.

In the meantime, Munch plans to return to the UofM, where he and Cicek will work on fine-tuning the growth conditions for his yeast strain in hopes of achieving even higher fatty acid yields.

Munch is right where he wants to be. He’s still growing fuel, just as he set out to do. “The only difference is that my ‘labour force’ is microscopic,” he says with a chuckle. “And I think it’s amazing that the waste I’m using in the process comes from biodiesel production itself. Talk about closing the loop!”