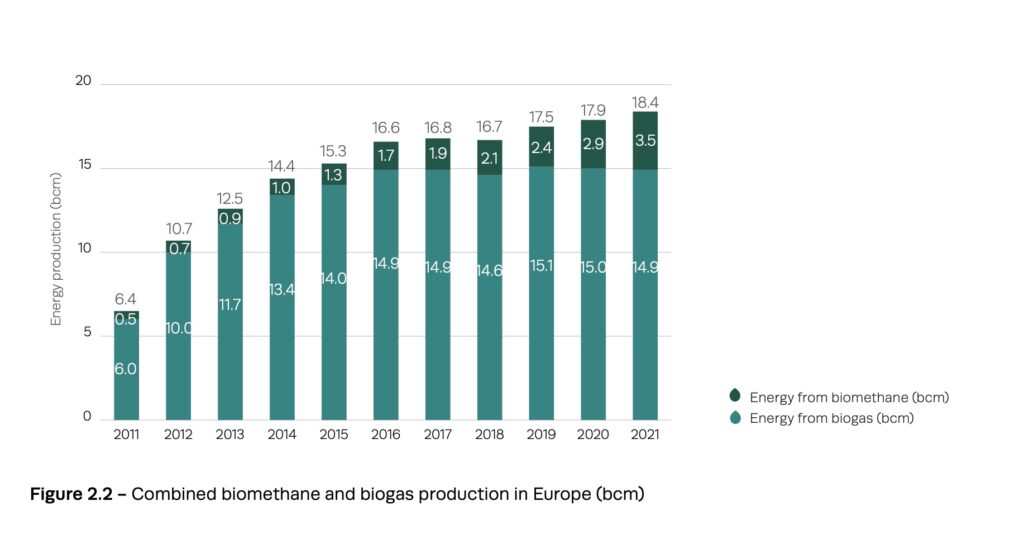 “The 2022 edition of the EBA Statistical Report… shows that the biogas and biomethane sector is already providing 18.4 bcm of renewable gas to Europe. In the mid-term, our sector is a key pillar of the REPowerEU strategy, including the deployment of 35 bcm of sustainable biomethane a year by 2030 to mitigate climate change and strengthen the EU’s strategic autonomy. By 2050, it could provide up to 167 bcm and cover 62 per cent of the gas demand.” Explains Harmen Dekker, CEO of the EBA.

The demand for biomethane for all final uses is strong: last year, the growth of the sector was unprecedented, with a 20 per cent increase in biomethane production and a total of 3.5 bcm produced in 2021. An even greater expansion is expected in 2022, as a record number of new biomethane plants (184) started production last year and will become operational within 2022.

The need for higher energy independence is combined with falling biomethane production costs, which are already significantly below the expected average TTF gas price for 2022 (80 €/MWh as opposed to 134 €/MWh). It is thus clear that speeding up biomethane production and accelerating the clean energy transition are of high importance to stabilize gas prices and ensure energy security.

The deployment of biomethane can also increase the availability and affordability of organic fertilizers for food production. Natural gas is at the moment the main feedstock and energy source to produce synthetic fertilisers. According to the EBA Statistical Report 2022, Europe could already save today 0.6 bcm of natural gas consumption by replacing five to six per cent of synthetic nitrogen fertilizers with digestate. This could have already avoided 1,096 ton CO2 equivalent in 2021, as the production of mineral fertilizers is highly energy-intensive.

The overall expansion of the sector will also boost the deployment of a resilient European bioeconomy. The biogas industry in EU-27 had a turnover of € 5.75 billion in 2020, relatively higher to the hydropower industry (€ 4.65 billion).