April 22, 2019 - Taking a step closer to a “green” replacement for fossil fuels, a research team that includes a chemical engineer at Worcester Polytechnic Institute (WPI) has developed a novel process using an unusual solvent and an exotic microorganism that may make it possible to manufacture isobutanol and other biofuels more economically. 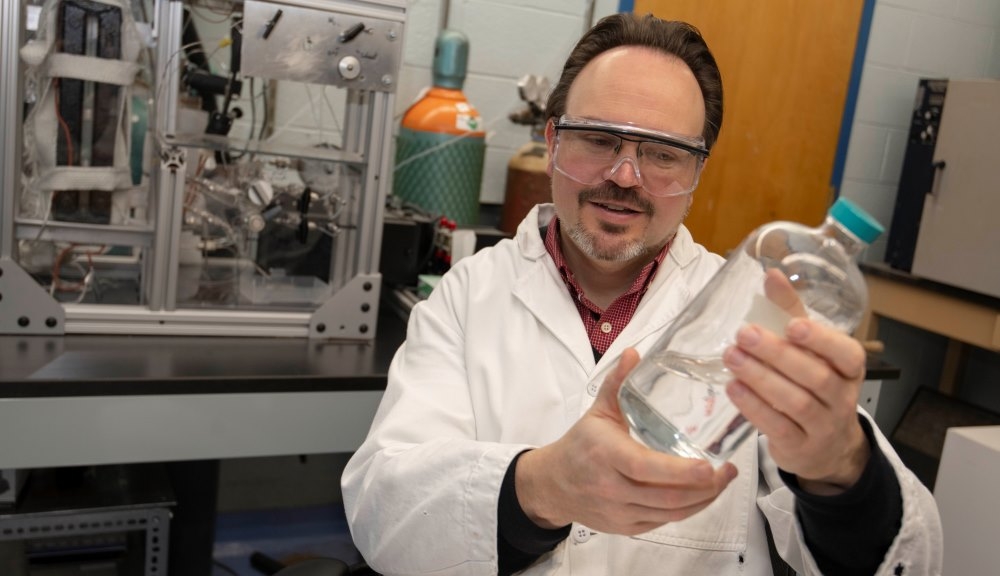 WPI chemical engineering professor Michael Timko with a sample of isobutanol. He is helping develop a novel process that may offer a more economical way to make the biofuel.

Isobutanol, like ethanol, is an alcohol, but its lower water solubility (which reduces the risk of corrosion associated with many biofuels) and higher energy density (which translates to increased miles per gallon), have created considerable interest the compound’s potential use as a gasoline additive and even a gasoline replacement. But manufacturing isobutanol, which is typically produced using biotechnology, has proven difficult and costly.

“With the growing threat of climate change and our dependence on fossil fuels and petroleum-producing countries, there is increasing interest in using isobutanol as a gasoline additive in place of ethanol, which can significantly lower a vehicle’s fuel efficiency,” said Michael Timko, associate professor of chemical engineering at WPI. “But we haven’t found an environmentally friendly, efficient, or inexpensive way to produce it.”

In a paper published recently in Nature Communications (Engineered Microbial Biofuel Production and Recovery Under Supercritical Carbon Dioxide), Timko and colleagues describe a novel method for producing and extracting isobutanol that uses supercritical carbon dioxide as a solvent and a bacterium that can thrive in this harsh, antimicrobial liquid. The team genetically engineered the bacterium, which was isolated from a naturally occurring reservoir of high-pressure carbon dioxide, by adding genes for the production of isobutanol. They then showed how supercritical carbon dioxide could overcome two important problems that plague conventional biofuel production methods: low yields and bacterial contamination.

Timko, who received a National Science Foundation CAREER Award in 2016 for his work with biofuels, analyzed the process and showed that the biofuel could be made using five times less energy compared to traditional manufacturing processes, making it less expensive, more efficient and more environmentally friendly.

“We’ve done the calculations to prove that this process works and it works well,” he said. “We had an intuition that this would work but the question was if it would be energy efficient. Turns out, it is. The art of the research has been creating the extraction technique. Virtually every way to separate mixtures had previously been tried on isobutanol, but we came up with the right process.”

Timko co-authored the paper with Kristala Jones Prather, Professor of Chemical Engineering at MIT, and Janelle R. Thompson, Associate Director of the Singapore-MIT Alliance for Research and Technology, who have worked with him on the project since 2015, when they collectively received a $1.5 million award from the Department of Energy. WPI received $500,000 of that grant for Timko’s work on process modeling, biofuel extraction, and process analysis. The MIT team worked on microbiology and genetic engineering.

Isobutanol is made in a bioreactor by fermenting biomass using microorganisms. The final product is extracted with organic solvents, which are often flammable, toxic, and costly. The solvents are unable to extract the isobutanol quickly enough, and as its concentration increases, the fermentation process stops. Scientists have tried to boost the reaction’s yield using more conventional techniques, including gas stripping, adsorption, distillation, and liquid extraction, but with limited results.

The WPI research team addressed this problem by replacing the organic solvents with supercritical carbon dioxide, which is a fluid state of the gas held at or above its critical temperature and pressure. Timko showed that by using this abundant and renewable solvent, they were able to extract high-purity isobutanol quickly enough to prevent it reaching levels that might otherwise have brought fermentation to a grinding halt. Timko’s analysis shows the supercritical carbon dioxide process consumes about six times less energy than any other extraction process.

The bacteria typically used to produce isobutanol cannot grow in supercritical carbon dioxide, so the research team went looking for a microorganism that had evolved to thrive in this harsh liquid. They found a good candidate in Bacillus megaterium SR7. The microbiology team at MIT identified a specific strain of this microbe, found inside a wellhead in Colorado that contains one of the world’s largest geological reservoirs of high-pressure and nearly pure carbon dioxide. Not only can SR7 survive the harsh bioreactor conditions, they found, it is able to grow under conditions that are lethal to all previously studied microbes.

The microbe, though, lacked the genes needed to produce isobutanol, so the MIT team had to add them through genetic engineering. Tests showed that modified Bacillus megaterium SR7 can, indeed, produced isobutanol while growing in supercritical carbon dioxide.

Timko’s team performed calculations on the complete process for growing the organism, producing isobutanol, extracting it from the fermentation mixture, and recovering it so it can be used as a fuel.

“We used 30 years’ worth of scientific experience to build this process,” he said. “Just having an organism that can grow in supercritical carbon dioxide isn’t much of a splash but producing isobutanol and being able to siphon it off at the right rate – all together that’s a big, big splash.”

Timko noted that there are still questions to be answered. For example, they want to know how to produce isobutanol more robustly in a supercritical fluid, and how to engineer the microbe so it will replicate more quickly.

“Think of Bacillus megaterium as a little chemical factory,” he said. “This chemical factory actually is self-replicating. The more effectively it can copy itself, the better it can produce a product. We need as many little microscopic factories as possible. This is the challenge researchers have been trying to overcome: How can we keep these little creatures alive long enough for them to generate the volume of isobutanol that we need?”