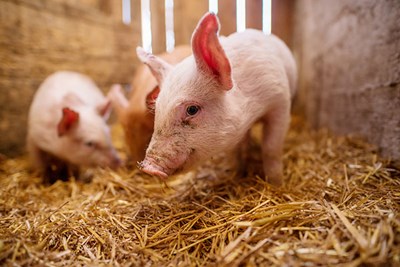 Researchers are converting wet, solid biowaste, such as manure from pig farms, into liquid fuel that can be blended with regular diesel. Photo supplied.

A team of researchers from UMass Lowell, the University of Illinois at Urbana-Champaign and China Agricultural University in Beijing has developed a new, sustainable way of converting wet biological waste into diesel-compatible fuel, using heat and water.

The process, called hydrothermal liquefaction (HTL), converts wet, solid biowaste – such as animal manure from farms, food scraps from restaurants and food-processing plants, and algae from wastewater treatment facilities – into liquid fuel that can be blended with regular diesel.

“This process is environmentally sustainable, and has the potential to augment the country’s energy production while reducing greenhouse gas emission,” says UML Plastics Engineering Asst. Prof. Wan-Ting (Grace) Chen, who is a member of the team.

Each year, the United States produces nearly 80 million tons of wet biowaste. Worldwide, the amount of biowaste produced is expected to climb due to urbanization, industrialization and population growth.

“The World Bank has projected a 70 per cent global increase in urban waste and an 83 percent increase in disposal cost by 2025, based on current waste-disposal technologies such as incineration and landfilling,” notes Chen. “Finding an effective means of repurposing biowaste into a resource is key for a sustainable future.”

According to Chen, the renewable fuel blend currently has comparable performance to diesel in terms of combustion efficiency and carbon emission profile. The researchers are conducting more tests to fully understand the effects of HTL blends on combustion characteristics, including the introduction of additives to further reduce the blends’ pollutant emission levels. Their ultimate goal is to patent the technology so it could be applied on a commercial scale.

The team’s initial findings were published on Nov. 13, 2018, in the journal Nature Sustainability.

From biocrude oil to diesel blendstock

According to Chen, biocrude oil, which is converted directly from wet biowaste using the HTL process, produces a comparable amount of heat to petroleum crude oil (about 75 to 90 per cent). However, to commercialize the production of biocrude oil as transportation fuel, it has to comply with current standards and specifications for diesel fuel and engine emission.

To achieve this goal, Chen and her collaborators came up with a combination of distillation (the process of purifying a liquid by successive evaporation and condensation) and esterification (reducing the acidity of the distilled products) to effectively upgrade the biocrude oil from HTL into diesel blendstock.

Engine tests performed by Chen’s team – using 10 to 20 per cent upgraded distillates blended with diesel – showed a power output of 96 to 100 per cent.

“Our research showed that distillation plus esterification provides a higher energy recovery ratio and lower greenhouse gas emission than conventional fuel-upgrading methods such as hydrotreating, which uses high-pressure hydrogen gas to remove oxygen, nitrogen and sulfur in crude oil,” she says.